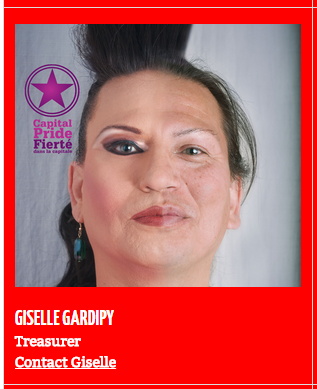 People will suffer, but hey, as this group’s Facebook page explains, they’re “sharing the universal message of love, diversity and inclusion.” So if you don’t get paid, well hell, you should be more tolerant and loving and inclusive of those diverse individuals who don’t pay you. (And if history is any indication, unless you do, some people will call you “homophobic.” Just because that’s what they do.)

The Ottawa gay pride organization “Capital Pride,” which organizes that city’s irksome gay pride parade and what seems to have grown into a domineering, now summer-long gay festival in every North American city, will declare bankruptcy. This, according to… yeah, its Facebook page.

This is not the first time this organization has run into trouble. They seem to be a perpetual basket-case of last-minute bailouts.

Some news outlets sheepishly wrote it up today. We expect to find it buried in the Arts and Feelings section of newspapers tomorrow, and then summarily dropped, again, because that’s what they do. It shouldn’t be dropped.

It is with extreme sadness and regret that Capital Pride must inform its membership, stakeholders and community, that after 29 years of operation, the Board of Directors has found itself in a financial situation beyond its ability to alter or repair and is now forced to declare bankruptcy. …

The Capital Pride organization claims to be a professional organization. We aren’t at all sure about that.

The mission of the Capital Pride Committee is to present an entertaining, professional Pride Festival which will perpetuate the spirit of pride in our community and provide a positive economic impact to the Ottawa-Gatineau region through tourism. 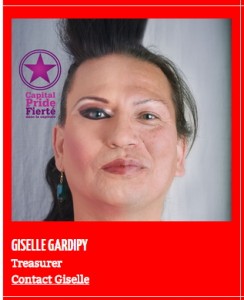 Their treasurer, the person who holds a very serious position within an organization that accepts untold community cash and favors, is seen at right in that organization’s super-serious web site‘s ABOUT page, in a very professional-looking photo. Her name is indicated as Giselle Gardipy.

She was apparently unavailable to comment, as Metro News reports: “Giselle Gardipy was the treasurer for the event, but Provost said she was unreachable after the pride week’s last day on Aug. 24.”

Unreachable? That seems odd for a serious organization’s treasurer, currently embroiled in a bankruptcy.

On that organization’s super-serious Facebook page, where the Capital Pride people chose to post their official bankruptcy press release, their treasurer “Giselle” is pictured in the same pose as on their web site, only bigger. But he (as we find out) is actually named Daryle Gardipy, and “her” last name is actually something else (“aka Giselle Gotti-Chanel”), which is weird for a serious 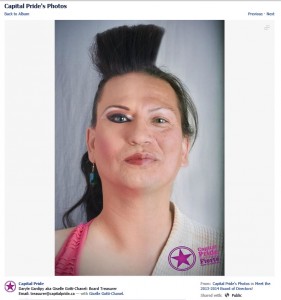 officer of a serious organization dealing with so much public cash and community involvement.  Even the Metro News report called him “her.” The organization obviously should be more transparent and honest, but maybe the media should also dig into it a little harder than, you know, not at all. (Oh hang on, maybe the Facebook listing is tomfoolery, and the web site is correct. Who knows?)

We would have chosen a different style of photo, and a more transparent naming convention. After all, it’s a public listing of the officers of an organization’s board of directors; and regardless of the cause, this is a group which accepts huge amounts of the community’s dollars, and a huge commitment of volunteers, and a huge amount of the city’s taxpayer-paid resources, and so it should be acting seriously. The community has a lot invested in this gay pride parade, whether they actually like it or not.

We have no idea under what legal structure that group is registered or incorporated, as the web site doesn’t say (which is weird in and of itself), but this unserious trans-gender-pseudo-naming and androgynous photo identification idiocy would seem to be the only remaining place left where big government progressives haven’t yet imposed strict regulations. As almost always, we don’t need the regulations – it’s plain and clear that this is the kind of organization we would never deal with.

This is anything but gay.

Previous articleIt was the worst place to start a business outside of Manitoba or Cuba.
Next articleCanadian soldier killed by Islamist nutbar – in Canada