I’ve pointed this out a thousand times but here we are again: whenever the news media doesn’t mention a political figure’s political leanings or party affiliation, he or she is a liberal, leftist, Democrat, socialist, or perhaps all of the above. Conservatives and those on the political right are always clearly identified as such. Often sneeringly.

The very liberal Chris Matthews, who literally made a profession out of being an ardent liberal commentator and anti-conservative partisan, was described by CTV News’ twitter kids today as being, well, not a left-wing at all. And those sexual harassment allegations against him which are the likely root cause of him being in the news today? See, when they’re against liberals, they are, in the liberal biased news business, mere “controversies.”

The accompanying article that they link to fails to mention the words left-wing or even liberal even once in the whole report. Amazing how they accomplish that when reporting about a guy whose whole profession and devotion in life is to be a liberal or left-wing political pundit — not a neutral one, and ardently left-wing one. 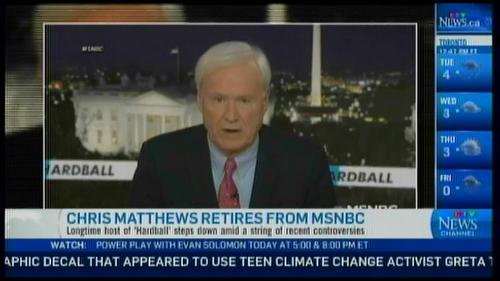 CBC was hilarious too. News anchor Andrew Nichols also managed to never mention the political leanings of either Chris Matthews or MSNBC in his report. “Viewers of the U.S. cable channel MSNBC will find a change in the schedule. Political anchor Chris Matthews quit last night…”.