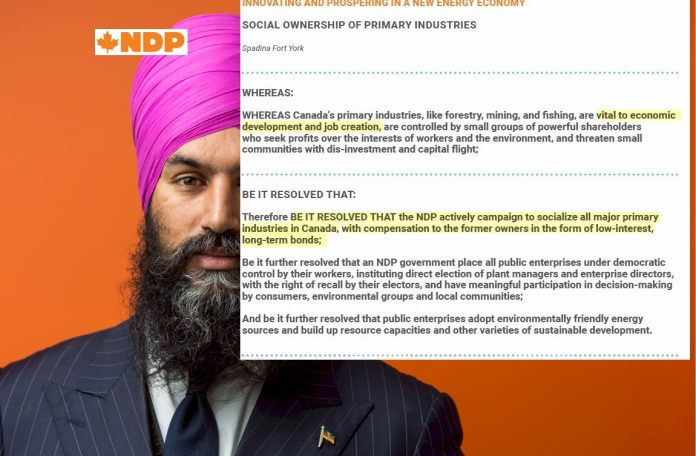 Editor’s note: Here’s the last — I promise — of my follow-ups to the day’s posting about the NDP policy convention this week. This is part four of four parts. Here’s One | Two | Three (and they all have links to each other now).

We all know the NDP is a socialist party. Back in the day they would happily admit it, but then they ran scared of the word because it wasn’t playing well. It was a marketing thing. As socialism failed more and more, one after another, around the world, it didn’t sell well any more. The NDP became embarrassed of their roots, their core, their base, their reason for being, and yet they maintained their ideology. They took the dramatic step of trying to fool you (they think you’re stupid), and they officially took the word “socialism” and references to “socialist party” out of their party’s constitution. (My link is to a state-owned CBC article about it, which is fittingly hilarious as they literally rely on each other.)

It’s pure bull, of course. They always were, and still are very much a full-on socialist party — more socialist now than ever, as evidenced by my postings about their 2021 policy convention on this site today (see links at top of article). It could be argued without my usual habit of exaggeration that they’re not even just plain old socialist anymore, but rather — perhaps because of Bernie Sanders’s semi-rise to semi fame and the news media’s adoring obsession with their grand young dame, the overly brash and outlandish dumb-dumb, socialist Alexandria Ocasio Cortez), they’ve now embraced full-on communism instead. I’ve pointed out how, today, with their own words.

The policy convention aside, they still seem intent to BS-ing you, by hiding it all in more polite company. Not admitting where they’re really at.

And apparently the news media is playing right along, as they refuse to do their most basic jobs and calling them out on this. I’ve said it before, and I’ll say it again: the NDP exists only because the news media prop them up. Looking through their policy proposals today makes a mockery of politics — to say nothing of moderation — in Canada.

Let’s look at one last thing, as if to prove my point. (And “social ownership”… give me a large personal break on the BS rhetoric):

SOCIAL OWNERSHIP OF PRIMARY INDUSTRIES
WHEREAS:
WHEREAS Canada’s primary industries, like forestry, mining, and fishing, are vital to economic development and job creation, are controlled by small groups of powerful shareholders who seek profits over the interests of workers and the environment, and threaten small communities with dis-investment and capital flight;
BE IT RESOLVED THAT:
Therefore BE IT RESOLVED THAT the NDP actively campaign to socialize all major primary industries in Canada, with compensation to the former owners in the form of low-interest, long-term bonds;
Be it further resolved that an NDP government place all public enterprises under democratic control by their workers, instituting direct election of plant managers and enterprise directors, with the right of recall by their electors, and have meaningful participation in decision-making by consumers, environmental groups and local communities;
And be it further resolved that public enterprises adopt environmentally friendly energy sources and build up resource capacities and other varieties of sustainable development.

That one bears looking at twice and repeating. These first two points in particular. The first point:

They want to “nationalize” (that’s code for a socialist/communist government taking over your property against your will — stealing it, then running it) “all primary industries in Canada.” One could argue that there are a few industries outside of what they’re describing as “primary” (which they describe as forestry, fishing, mining, etc) that are also, as they write right after that, “vital to economic development and job creation.” One could say that all business and all industry is “vital to economic development and job creation.” Tourism. Technology. News media. Housing. Clothing. Food. And if that is the standard, then all private business in Canada is ripe for the stealing by the NDP.

Earlier today I showed you several proposals wherein they indeed intend to take over and “nationalize” other industries: car manufacturing (“BE IT RESOLVED THAT: The NDP actively campaign for nationalization of the major auto companies, to be operated under workers’ and community control…”), internet and tech-related businesses and cell phone service (“The NDP will actively campaign to nationalize the telecommunications infrastructure sector by proposing a national strategy for broadband Internet services and establishing a public telecommunications company”), and others too.

But the second part of that sentence is horrendous:

…with compensation to the former owners in the form of low-interest, long-term bonds;

So you thought I was exaggerating? After absconding with your business, they don’t even intend to pay business owners for your property and life’s work in the normal manner, as has been done since the dawn of time in all civilized nations (and all democracies) in the course of business, for millennia. This sounds like a communist dictatorship, hardly a “democratic socialist” party. (And I love how they make a point of saying that compensation will be in the form of “low interest” bonds. They wouldn’t want to compensate evil business owners with “normal” interest bonds —no, just the “low interest” ones. Why even compensate the evil top-hats at all?)

A third point adjoining that point: after they take over, then “…place all public enterprises under democratic control by their workers…”. This is pure, standard, boiler-plate communist-talk. It’s literally a part of every communist talking point about all workplaces, always.

I said that they no longer even sound like a socialist party (and geez… can we drop the BS where we allow them to get away with calling themselves a “democratic socialist party” as if that’s OK — or honest?). Lo and behold, I saw where they have now moved to put that word back into their constitution. It used to be that they were worried about scaring off regular voters who don’t love the communism or socialism, for cynical marketing reasons. Now they’re worried it looks like they endorse capitalism, which freaks them out even more since they obviously do not. Note the wording in their document: “WHEREAS this change [eliminating the word “socialist”] suggests the NDP uncritically embraces the capitalist system…” 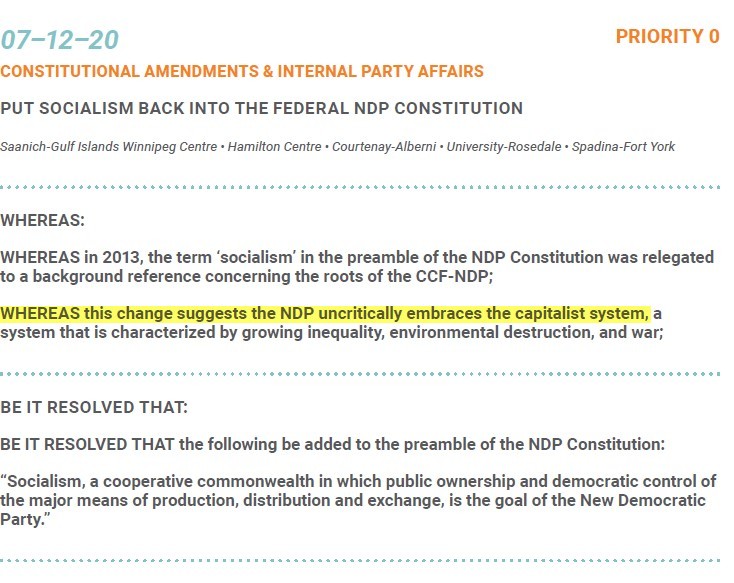 This is a farce. It’s time to end the farce.