Home Canada National Post: please provide your ’07 reporting of what is still new... 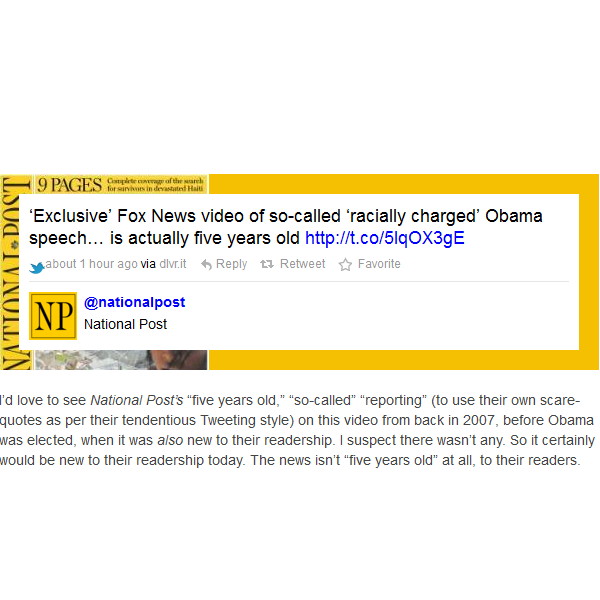 Like the rest of the Obama-luvin’ mainstream media, Canada’s National Post is apoplectic about the latest example of Obama’s lies and failure  —  and the exposure that Fox News Channel is giving to the liberal media’s own failures. Like its scarcely reporting any hard facts which could be damaging to their man Barack Obama   —  then or now.

Nor is the story of Mitt Romney’s Bain Capital (which is a success story, but they “report” on it as if it were a negative). Or the fact that Romney is a wealthy man (which they also “report” as a negative). Those stories are actually 10 or more years old. But that doesn’t stop the National Post or any lamestream media from reporting on it, extremely negatively, over, and over, and over again.

In fact, the video itself isn’t new, and nobody said it was! In fact, the DailyCaller.com, which is actually the news organization which exposed this video yesterday (not their old clichéd nemesis Fox News, as they even admit in their story  — so why Tweet otherwise?), clearly says this is a 2007 video, precisely to make the point that exposing this is also an indictment of the liberal media’s cover-up of the true story, way back then.  And way back then means when it should have been exposed fully, before Obama was elected with the help of the Obamamania media like the National Post  —  when voters really needed to know about the facts  —  the true character of Barack Hussein Obama, through a detailed vetting and full, objective assessment of his actual character. You know, they way they did (only woefully unfairly and full of malice and mendacity) with regard to Sarah Palin and her entire family, in detail.

And DailyCaller’s point is also the fact that only nine minutes of the video was ever available until now, out of the whole 36-minute video, and that some of the most damaging (to Obama) footage was the 27 minutes conveniently left on the cutting room floor. Other than that nine minutes, the rest is indeed brand new. It has never been seen.

Is the National Post therefore ignorant? Or deceptive? Which one?

National Post, today, doesn’t bother to cover that missing footage of the story either. That’s because really, the National Post is only concerned with slamming Fox News Channel, rather than the real story subject, which is Barack Obama’s angry, divisive, race-baiting and racially-charged thespianism and pandering.

Just look at the National Post’s article about this today: the video clip they provide their online readers selectively includes only a few seconds where Obama simply gives a “shout-out” to Obama’s mentor, Jeremiah Wright, instead of the fuller, more damaging new video footage now available to them. Why did they choose to do that? Aren’t they interested in the truth?

As the DailyCaller also explains, newspapers and other print media which pretend to be objective and pretend to employ journalists, only ever dutifully reported (to the extent they even touched this bit of Obama-exposing race-charged demagoguery at all) from the supposed “transcript” provided to them, which was from the Obama people themselves! And conveniently and deceptively the Obama people called it a “transcript” of the remarks, which is a lie: they only provided the liberal media with the pre-scripted (Obama/teleprompter) remarks, and not the actual words spoken  —  the actual transcript  — which would include the parts where he goes off-script and takes on that race-charged, pandering, divisive, anti-white rhetoric, and drives it to a whole new level.

The liberal media, in 2007, including as best I can tell, the National Post, also never said anything about the hilarious, fake southern/black accent Obama is putting on in the speech, in order to pander to his mostly black audience  —  despite his being born in Hawaii and living in Chicago most of his life. I know southerners, and northerners, and I have family in Hawaii. Obama’s faking. Play-acting. And that’s weird.

The media never really reported on any of this then and most, including the National Post, won’t even broach the real subject  —  the real problem  —  now. They “report” only on how ridiculous they think it is that Fox News is reporting the whole truth on all of this. In fact, their article is really nothing but a sad, silly and unwittingly, a very revealing rebuke of Fox News’ reporting of the facts; and a scathing criticism of Fox News. Their ink, and what’s left of their credibility, should actually be reserved for the belated, full and honest vetting of the angry, divisive, race-baiting Barack Obama, whom they already helped elect as president once.

But they’re too pro-liberal and biased to do that. That’s what’s more importantly “not new.”

COMING SOON: a load of BS re Fox News, amidst Shep Smith resignation