More fitness fodder for liberals: Bush rides a mountain bike like few can 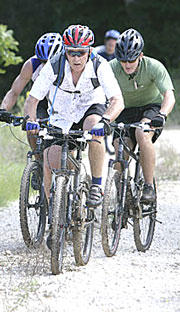 It might have pained the reporter, Sal Ruibal, a 51-year-old sportswriter for USA TODAY, more than the mountain bike ride itself—to write about yet another positive aspect of President George W. Bush, conservative Republican President of the United States.

CRAWFORD, Texas — The most powerful man in the world is also a heck of a mountain bike rider.

[…] President Bush invited me and a few other reporters for a mountain bike ride on his 1,600-acre Texas ranch Saturday. His escapades on the bike have been well-documented: an over-the-handlebars crash here at the ranch and a wet-pavement wipeout in Scotland that injured a pedestrian policeman.

But the truth about this 59-year-old mountain biker is that the man can really ride. Over the course of a two-hour Tour de Crawford, Bush humbled every rider in Peloton One with a strong and steady pace over scorching hot paved roads, muddy creek crossings, energy-sapping tall grass and steep climbs on loose and crumbling rock.

“This is not a race,” he insisted at the start of the ride. “This is a chance for me to show you a little slice of heaven, as far as I’m concerned.”

But there is one rule: Don’t pass the president.

No problem. Keeping up with Bush — whose fitness level has been rated as being in the top 1% of men his age — was as difficult as any race I’ve entered. I started out riding next to him at the beginning of the ride, but when we left the dirt trails and hit the rolling asphalt, the pace accelerated to more than 20 mph, which is pretty good for road bikes but absolutely blazing for heavier, knobby-tired mountain bikes. And did I mention that the only factor mitigating the mid-80s temperatures was a very strong headwind? […]

This will be used (as was reports of his superb running ability) by Democrats and sundry liberals as an excellent time to complain about the kids who can’t have bikes because their parents are so darn poor (thanks to the Bush tax cuts)… and the fact that there STILL isn’t a government free bike give-away program for America’s poor (thanks to Bush’s tax cuts)… and Senator Kennedy will bring up how kids in Iraq can’t ride bikes because they’re all dead or dieing, whereas they all had bikes before…

Previous article
Mother of murdered young daughter: “How did we become so far left wing?”
Next article
Fighting for right