I guess when you’re desperate, you resort to lies and fakery. Hey, CBC? 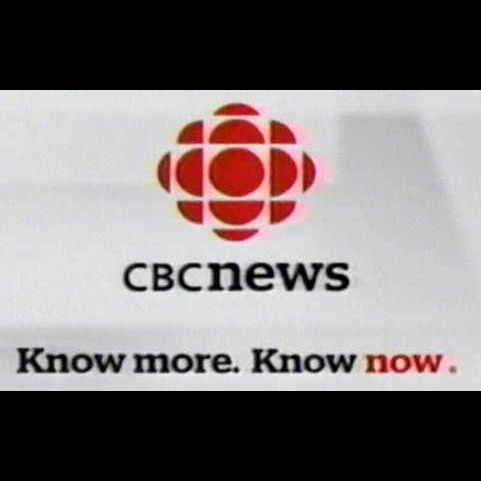 Or the state-owned, taxpayer-funded CBC “News” just faked you out.

Spoiler alert: it’s exactly what you’ve come to expect from the CBC “News.”

In this example from one of the state-owned, taxpayer-funded CBC’s 8,000 Twitter accounts, which they use to advance their left-wing causes such as this, we see the Obama-fawning CBC “News” hyperventilating  —  or wiping their brow  —  over the Obama regime’s latest

environmental-leftist-appeasing directive, which is yet another new EPA “rule” to cut coal emissions.

In order to bolster their their already beyond ridiculous advocacy of Obama, and whatever is his latest liberal-left big government boondoggle, CBC “News” obviously felt they needed to fake you out a little, and gin-up the news with a stock photo of Obama wiping his brow.

Let’s be clear: the picture is not representative of the story. The CBC “News,” which purports to never exaggerate or takes sides or tells lies, couldn’t find a photo of today’s announcement of their man Obama dramatically wiping his brow to exemplify all the “man-made global warming,” because he wasn’t even there at the news conference. So they made it up. They set about looked for just the perfect picture  —  something depicting the increasing warmth!  —  and found it. The photo is therefore only there to help CBC “News” enhance the Obama rhetoric; to “turn up the heat,” as it were. And in the process they hope to fake their readers out into buying the claptrap.

And that’s from a “news” organization.

They could have put a photo of the lady who actually made the announcement. Indoors at an air-conditioned government building. Or, say, a photo of the hundreds of thousands who will lose their job, as a result of this new 645-page big-government rule; or a photo of someone who will sell their home instead of trying to pay their electrical bill which “will necessarily skyrocket”  —  to use Obama’s own 2008 hope ‘n change rhetoric. 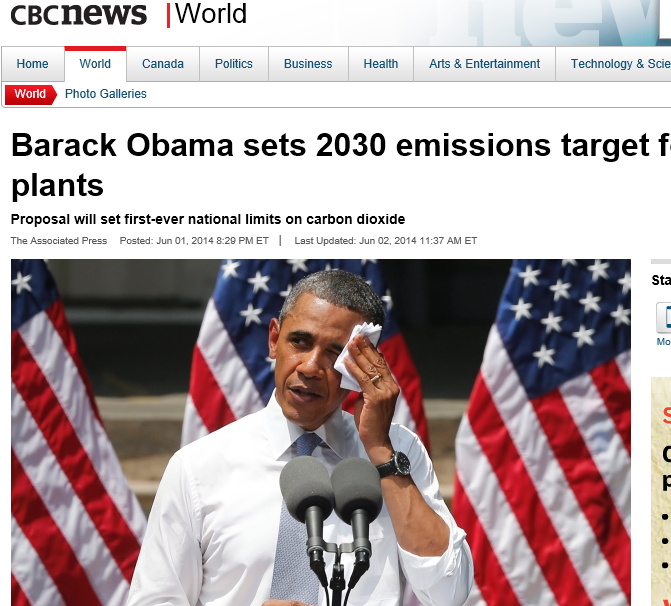 CBC “News” engaged in the same bit of fakery at their taxpayer-funded web site: The story’s attached photo is actually a bit of BS. It’s not representative of the real facts of this news story. It’s pure drama. Not news.

That photo also isn’t from today’s announcement. Again, Obama didn’t even make the announcement today. The photo is actually from a speech in 2013, in which Obama himself was clearly once again engaged in more than a little “drama.”  So it’s posted on the CBC News’ online story by CBC “News,” obviously only to help advance their own advocacy, and help to do the (other) progressives’ bidding.  Remember it’s “news.” Yet it’s not the reality. This is a news story colored by the CBC’s bias and advocacy. It’s actually kind of like the whole “man-made global warming” story.

Back to that tendentious CBC “News” tweet, in which they helpfully tweet that the rule is “touted by EPA as economically wise.”

This is the kind of idiocy we see on Twitter all day, but by partisan hacks and political butt-kissers. And now, apparently, the CBC.

It’s the EPA who invented the freaking rule and has been scrambling to rationalize it all day. And by the way, the EPA is not an economic think tank. The EPA’s currency isn’t money and goods and services and people’s jobs and people’s businesses, as most economists refer to when speaking of things that might be “economically wise.” The EPA’s currency is enviro hyper-rhetoric, symbolism, political ideology, mostly phony do-goodism, and invoking rules and regulations. So by that measure, this certainly is “economically wise.”

But by no other measure. See what the U.S. Chamber of Commerce says about it: “Proposed Carbon Rules Would Deliver Blow to Economy“.

I don’t need an attached BS photo to convince you that this betrays the CBC’s lack of objectivity, their fakery, their liberal-left bias, and poor journalistic standards. Again.

Personally, looking at that picture of Obama, I think he really just saw the latest Gallup presidential approval poll, in which 52% disapprove of him, and only 43% approve. And looking at the CBC’s ratings and their annual billion-dollar bailout by taxpayers, it is the exact opposite of “economically wise.”

Previous articleNOW the Conservatives want ME to donate to THEM to help THEM hammer the CBC?
Next articleHeadlines moved; accepting columns