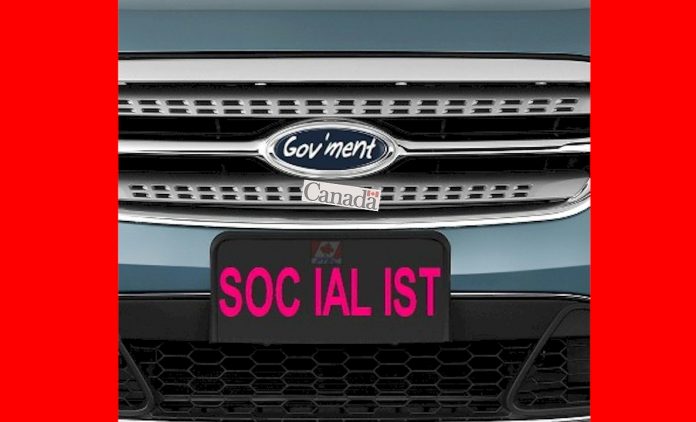 The state-owned CBC — which because I'm a normal...
Read more
News Roundup

This is what I'd like for my birthday, please. Scott...
Read more
News Roundup

Rule 13? It's a nice companion piece to this newsmaking...
Read more
News Roundup

Animal sucker-punches innocent 79-year-old in head, and casually walks away

Monsters walk among us. ...And it might virtually get...
Read more
News Roundup

Don't worry, NOBODY COULD HAVE PREDICTED THIS. The Trudeau...
Read more
News Roundup

Apparently, The Experts™ at CDC are now on about...
Read more
News Roundup

Who are they to misidentify Senators Manchin and Sinema,...
Read more

By purposely — and let’s be accurate here, I think the better word is purposefully — not fully detailing the backgrounds of the two individuals featured in their glowing “news” story, the Vancouver Sun is practicing journalistic malpractice, I believe. The two individuals featured in the story are what most people would call far-leftists or even radical political activists. Socialists. Some say Marxists. They call themselves that, it seems to me. It’s what they do. It’s their whole lives. The Vancouver Sun is doing a disservice to its readers, to journalism, and to democracy.

Indeed, the word “left” does not even appear in the story —a story about two extreme left-wing agitprops. 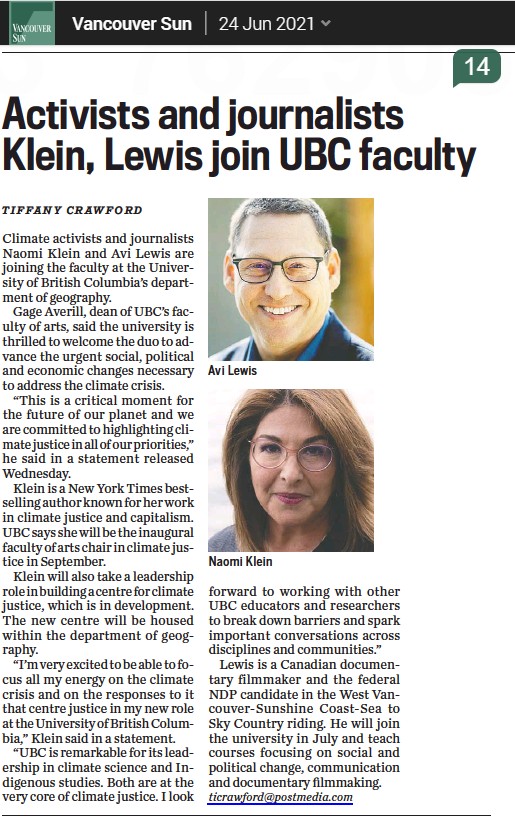 Naomi Klein and her husband Avi Lewis are Canadian far-leftists. This is not merely my opinion, they are known in most political circles as just that. For being far-left agitators. Anti-capitalists. They certainly call themselves socialists, but as I’ve pointed out many times, many of those who call themselves socialists (even those who insist on wagging their finger at you and saying emphatically, “I’m a DEMOCRATIC socialist!” —which always makes me laugh), are in fact full-on communists. Marxists. And I feel that way about these two. I’m pretty sure even they would agree that they’re useful idiots to communist regimes.

Not too long ago, Naomi Klein retweeted an article praising the communist dictator Hugo Chavez, in which the author wrote, and I’m quoting precisely, “I’m what they call a useful idiot when it comes to Hugo Chávez…”.

But none of that or the easily accessible material available to any first-year UBC student (or any person over the age of eight with internet smarts, or with any inclination to find and report the truth whatsoever) even remotely comes up in this dishonest, misleading, misinforming news story, the key point about which is the hiring — by a publicly-funded university, to teach our kids(!) — of two radical leftists who might quite possibly be full-on Marxists. And whose goal in chief is, I figure, to bring up a new generation of Marxists. Does the Sun share this goal? Does the university?

Here’s a tiny, fairly recent example from among the countless examples I could choose from, regarding Naomi Klein, who, while the United Auto Workers were on strike in 2019, suggested that the federal government take over General Motors and manufacture cars as a government operation. To “kickstart a #GreenNewDeal.” She directed this to the three left-wing leaders (none of which were left-wing enough for her, apparently, because none of them went with this as far as I know.) 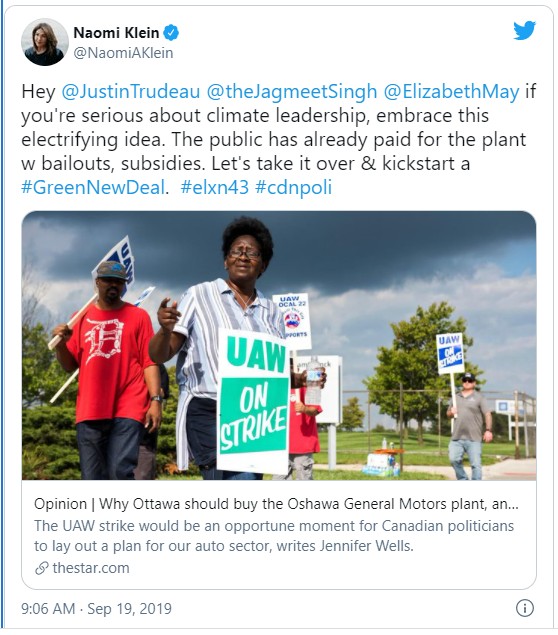 I’ve been following the careers of these two people — a married couple, which is also not mentioned in the article (instead, referring to them as “a duo” for some reason having to do with making it more acceptable or something) — for years. Back in 2007, I wrote about them and their cabal of leftists and full-on communists in Canada’s institutions:

Lest you think I’m simply a right-wing hack, which I very much might be, trust me, I’m not alone about these two and/or their comrades. The liberals’ very own Maclean’s magazine has also published opinions about the cabal, writing (and please do follow the links):

…To wit: In 2004, Linda McQuaig glowed in her picture with and praise for Chavez. Arguing he redirected “vast sums of national wealth to the swollen ranks of Venezuela’s poor,” McQuaig mourned his passing in 2013. She called it a “sad milestone.” Likewise, Naomi Klein approvingly re-tweeted the claim that Chavez left behind “the most democratic country in the Western hemisphere.” (No surprise there: Klein long demonstrated support for Latin America’s interventionist left. She was thrilled with the “pink tide” that swept Latin America in the early 2000s; in 2004, Klein added her name to an online petition whose signatories wrote “We would vote for Hugo Chavez.”) One current Alberta NDP MLA, Rod Loyola, pre-politics, praised Chavez. And in 2013, Loyola was listed by the Marxist Leninist Daily as the media contact for an Edmonton “tribute to Chavez”. …

My point — the importance of properly explaining their full backgrounds — their far-left history — is so obvious, I don’t understand how it got by the editorial staff at a major newspaper. Unless they did it on purpose. For some reason.

In describing Klein they write only that Naomi Klein “critiques” global capitalism, and that that’s what she’s best know for. No. That is incorrect. She is best known to me and most other informed political followers for her abject hatred of capitalism, and for pushing her hardest, as her life goal, to end it and replace it with global socialism or communism. And like so many leftists, she is using “climate change” as yet another tool — just the latest, as some use it or “systemic racism” — to help achieve that nefarious end.

The newspapers across Canada and the U.S have an obligation to explain to people who don’t already know, that all universities need — UBC chief among them —  some diversity of thought, because an egregious lack of diversity of thought has now reached epidemic, crisis proportions in our major institutions. Our nation’s universities are now inarguably little more than left-wing indoctrination centers, and propaganda and political activism centers. And this UBC hiring is the clear opposite of diversity, or improvement. It obviously exacerbates the problem. It doubles down on it —literally! It’s progressive, by which I mean purely politically. It’s actually horribly regressive, as it makes the existential problem much worse. And it helps obliterate any notion of balance and objective learning —at a public institution yet — thereby further reducing our already eroding trust in our institutions ever further, and it’s already at a historic low. It is knowingly piling on more leftist radicals and activists on top of a faculty and an institution already replete with them. Again, for some reason.

Instead of hiring more left-wing radical activists they — obviously — need to start hiring some conservatives, a great many of them, and those who are dedicated less to political activism and more to the art of educating and inspiring minds; and, so, hiring those interested not in the creation of radical political activists for the far-left and ultimately their goal of a one-party socialist state, but in creating educated and open and creative and inspired minds.

What the paper wrote in this news story misses the point, on purpose, and was little more than apologetic left-wing-appeasing tripe that normalizes the hiring of Marxists (—to teach our kids in publicly-funded universities!), written by and edited by apparent activists rather than by reporters and those interested in presenting the information we need to make informed decisions. With our tax dollars, yet.

So aside from new leadership at our universities, what we also need are newspapers that aren’t Marxist apologists like the Vancouver Sun and Postmedia, which hire left-wing activists posing as reporters and editors.