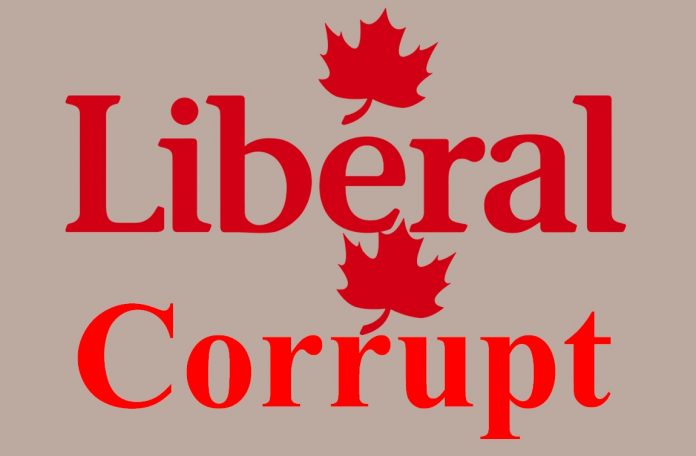 The Liberals’ Globe and Mail division will be a nasty place to work at again today. The dynamic duo, Robert Fife, Ottawa Bureau Cheif, and Steven Chase, Senior Parliamentary Reporter — who often make the bold move of daring to expose Liberal Party corruption when they see it — has really done it this time. They’ve exposed pretty much the whole damned party — virtually every elected MP — as corrupt.

Liberal MPs have been using parliamentary funds to pay for services from companies that provide two of the governing party’s most important digital campaign operations, and that also run its powerful voter-contact database.

An examination of expenses filed in the House of Commons shows 149 Liberal MPs, or 97 percent of the caucus, made payments out of their office budgets to Data Sciences Inc., founded by a close friend of Justin Trudeau.

And 152 Liberal MPs made payments to NGP VAN, a political-campaign software used by the U.S. Democratic Party and licensed by the Liberals to run their Liberalist database. …

This is huge. Fife and Chase will once again be blasted and/or snubbed by the other G&M staffers for not following the script. I don’t doubt several G&M employees wish Fife and Chase didn’t work there, and might even work to affect their cancelation. Because that’s what they do. This proves Fife and Chase are good at their jobs. They reach — and dare to publish — the inevitable question that this story leads to:

The issue of expenses claimed by Liberal members of Parliament raises ethical questions about whether taxpayer funds are being spent for partisan political purposes.

Ethical question. Hmm. Ya think? And where have I heard that term “ethical question,” pertaining to this Liberal government before?

This, once again in our country’s short history, shows how the Liberal Party thinks of itself as not just another political party, but rather as THE party, perfectly entitled to use our taxpayer cash to get themselves elected and re-elected — not unlike how some of Justin Trudeau’s favorite “basic dictatorships” of the world think of themselves.

They have learned nothing from their or their leader’s multiple ethics violations, nor even from the granddaddy of them all, the biggest political corruption scandal in the history of Canada: the exposure of the Liberal Party Adscam Sponsorship corruption scandal — a scandal which went on, we later found out, from 1996 to 2004. Eight years. It was 2004 before any of the “news” media’s crack investigative journalists bothered to figured it out —or was brave enough, or felt compelled by virtue of the whole thing being as conspicuous as a moth among butterflies, to expose it publicly. Unlike any of the current or recent ethics violations, that one literally ended with a few Liberals spending years in prison. This one exposed today has apparently been going on since 2016. Five years. They’re getting faster!

(Just provided for context: note that when a Conservative has an ethical lapse — say he forgot to put his mask on at an outdoor BBQ one day — it takes approximately 24 seconds for the massive headlines to surface across all “news” media and for the Twitter idiots to lose their minds, all insinuating corruption and the evil Conservative’s anti-science and possibly “racist” nature, and demands for his criminal prosecution or at least his firing promptly ensue.)

Conservative Party ethics critic Michael Barrett is quoted as saying today, “So, we have a situation where taxpayers’ dollars are being used to effectively subsidize the political digital operations of the Liberal Party of Canada”  —exactly the same quote being routinely given back in in 2004 when the Liberals were exposed then.

But once again in history, exactly as they said back then, the Liberals who are knowingly engaging in this today, “don’t know nuttin.” And they don’t even mind telling you they don’t even remotely care.

Liberal MP John McKay also said he had no idea why money from his office budget was going to Mr. Pitfield’s company.

“I haven’t got a clue,” he said. “I can’t explain it. I vaguely recall once a year we write a cheque and it’s always been explained that it is within the ethical guidelines, so we all kind of sign up for it and it goes into some oblivion.”

This is also another way of saying, I don’t give a flying F. But the F doesn’t stand for Fife.

As Fife and Chase report, the president of one of the firms, Tom Pitfield, is a childhood friend of Justin Trudeau, who also ran their election campaign’s digital data operations.  Pitfield’s wife, Anna Gainey, was the president of the Liberal Party itself and is also close to the Trudeaus. These are the two people who went down to the Aga Khan’s lavish resort on a private jet with their pals the Trudeaus back in ’16, which the ethics commissioner later ruled was an ethics violation — a conflict of interest. Again: nothing learned. Or more likely, again, I don’t give a flying F.

I don’t know how they can live with themselves. Much less, how people can knowingly vote for these corrupt people. Maybe nobody givers a flying F about Canada anymore. It’s no wonder Canadian mayors and councils can disrespect Canada and Canadians and literally cancel Canada Day celebrations —without any backlash and Canadians bothering to protest. It seems liberal Canadians have been subsumed by the Liberal Party zeitgeist, and don’t give a flying F about their country.