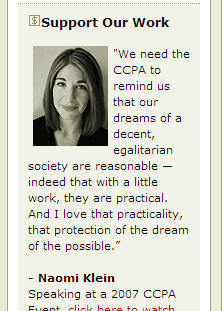 I was checking out the far-left websites the other day and snickering at what I found.  As usual, there’s way too much to go over here, but I thought I’d share one tidbit which made me laugh louder than others.

The word “egalitarian” has a couple of different meanings which are best sorted out by judging the speaker and that subject about which he or she is speaking.

When the speaker is Naomi Klein, who sounds very much like a communist to me, and the subject is the Canadian Center for Policy Alternatives, where if I’m not mistaken the “alternative” they refer to is an end to our free-market freedoms and capitalism as we know it, and changing our nation into another cog in the global socialist order to which these fringe leftists aspire (or as the CTV blithely refers to them, as simply an ever-so objective, innocuous “non-profit” “progressive” organization), then it sounds very much like communism to me.

I’ve mentioned Naomi Klein in this blog before.  I always try to remind you that she sounds very much like a communist to me.  I once described Klein as part of a description of her, um, life partner (I think that’s what they call ‘em), the state-owned, state-run CBC’s very own Avi Lewis:

Different kinds of egalitarianism can sometimes conflict, while in other situations they may be indispensable to each other. For instance, communism is an egalitarian doctrine, according to which everyone is supposed to enjoy material equality.[citation needed] However, because material inequality is pervasive in the current international economy, something must be done to remove it. Since those who enjoy the greatest material wealth are not likely to wish to part with it, some form of coercive mechanism must exist in the transition period before communism. But if the coercive powers of redistribution are vested in some people and not in others, a conflict of interest will take place, and inequalities of political power would emerge. History has shown, in the former Soviet Union for instance, that people who are granted coercive redistributive powers often abuse them. Indeed, those with political power were known to redistribute vastly unequal shares of material resources to themselves, thereby completely confounding the justification for their unequal political status. Therefore, most Marxists now agree that communism can only be achieved if the coercive powers of redistribution needed during the transitional period are vested in a democratic body whose powers are limited by various checks and balances, in order to prevent abuse. This by definition was the basis for the creation of the committees of planners. Committee is in Russian the word Soviet. In other words, they argue that political egalitarianism is indispensable to material egalitarianism. Meanwhile, other defenders of material egalitarianism have rejected Marxist communism in favor of such views as libertarian socialism or anarchism, which do not necessarily advocate the transitional use of the state as a means of redistribution. This is in contrast to unplanned economies such as Free Market capitalism, which use the marketplace to redistribute wealth rather than any centralized or decentralized bodies of power. 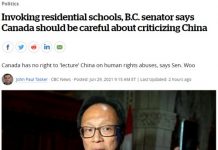 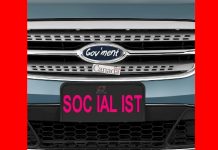