Newsquips news brief—  Newsquips are updated through the day, not unlike Hamas terrorist rocket attacks against Israel, and not unlike how the media ignores, daily, those Hamas terrorist rocket attacks and has ignored the 5000+ Hamas terrorist rocket attacks against Israel over the years.  …  On another brief note, thanks to “bluetech” for the PTBC life-sustaining $25 contribution over the holidays.  Thanks also to Stephen Glavin for the jaw-dropping $100 check sent just before leaving Canada for southern climes for the winter.  In case I missed them, thanks to “Alex E” for his $10 contribution, “lowrider” for his latest automatic, regular monthly contribution setup through PayPal, and “GrantK1” for his, “Don-t Want To” for hers; and thanks to the folks who have taken the time to comment on my blog entries and send emails with tips or just encouragement.  PTBC life-sustaining supporters, all

1.   Currently listening to the Prime Minister of Canada/Quebec speaking in frenglish about the latest economic news and plans.  He begins by speaking in French, then switches midstream to English, then a reporter asks a question in French, and asks that the PM answers in both French and English, which he proceeds to do, and before my head explodes, I switch to Fox News Channel.

3.    CTV.ca is conducting a poll today to verify (I think) the effectiveness of their latest swath of doom ‘n gloom economic Armageddon “news”.  They may have to ratchet up their Armageddon angle to better achieve the desired effect on the economy.

Also: it might be a tad embarrassing that the percentage of unemployed indicated on their poll, at 15%, is well over double the number of actual unemployed in the country, shedding some light on their readership demographics.  On the positive side for the CTV, I imagine that at the CBC the number of unemployed loitering there would be more in the order of 60 to 70 percent, with most of the rest being government workers surfing the web from work. 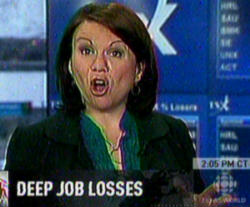 4. CBC reporter is SHOCKED!  SHOCKED, I tell you, that there are job losses in this country.  By way of proof, here’s a screen capture I caught. Yes I made the mistake of flipping over to the socialism-reliant, state-owned, doom ‘n gloom economic Armageddon channel, the CBC, and after all their prognostication over the past two or more years about the “R-Word” and the “D-Word” and the LOOMING ECONOMIC HELL ON EARTH, and so on, lo and behold, the economy is suffering some. It’s just shocking.

5. Just to clue you in a bit more on the extent of the media-generated economic recession-promoting efforts of the CBC, here are screen captures of their banners, taken over just the past few minutes this morning.  How do you think this will effect the economy: the Canadian consumers, small and large business people, investors, and so on?:

6.   Actual facts:  There was a net gain of 98,000 jobs created in 2008 in Canada.  And memo to the you’ve got to be kidding party’s Jack Layton, AKA General Jack, Commander-in-Chief of his own Class War:  in spite of the horrendous news, hourly wages remained healthy last month, showing a 4.3 per cent year-to-year increase, double the current inflation rate.  And their taxes are being reduced, such that many in Canada now pay no income taxes.  Therefore, the rich are getting poorer, and Layton’s “working families” (in contradistinction to the “rich” who sit on their asses all day long) are getting richer.  I’ll wait right here for Layton and his socialists to hold another one of their extremely well-covered news conferences, announcing that the poor are getting richer, and the rich are getting poorer.  Might as well buy a lottery ticket.

7.   While I was reviewing the CBC economic Armageddon banner-fest from Hell, I realized I’d forgotten to mention that for expert analysis of the, um, JOB LOSSES! — no sorry the DEEP JOB LOSSES! — the socialism-reliant CBC secured the views of the esteemed Erin Weir, labor economist with the Steelworkers Union.  We know he’s objective and apolitical in that special CBC kind of way, because (a) he’s with a left-wing labor union which represents “working families” and calls the latest Conservative budget a “do-nothing” budget “with the least new spending of any federal budget in more than a decade,”  and supports the socialist NDP, and writes socialist-sounding things like:

…and (b) he wasn’t identified by the CBC as being on the very political, far-left advocating Canadian Center for Policy Alternatives’ board of “National Office Research Associates”, which he is, along with a couple dozen other unionists, left-wing university professors, and sundry leftist politicos.  But don’t worry, for balance, the CBC had….. well actually nobody that I saw.  Perhaps they didn’t want to SHOCK me.

8. A li’l JUXTAPOSITION:  Once again flipped over to Fox News Channel after all that CBC’n, just to help stop some of the intelligence from oozing out of my head, which happens when you watch CBC.

And here’s what I actually saw and heard regarding the latest economic news between anchor and business reporter:

Anchor Shepard Smith (lightly sarcastic): “You’re just the purveyor of great news!”
Rebecca Gomez: “Hey join us for happy hour though [on the Fox Business Network] because we do try to put it all in perspective — you know, the world is not ending, folks! We’ll carry you through it!”

World not ending?  Why that can’t be right.

9.   Democratic Party governor Rod Blagojevich has been IMPEACHED—like Democratic President Bill Clinton before him.  Have a cigar!  Or maybe not.  Blagojevich will now face trial in the Senate, unlike President Bill Clinton.  …  Interesting tidbit: CBC, in covering this news earlier today, actually mentioned that he was a Democratic governor, and was impeached by the Democratic Party-controlled House.  CTV, on the other hand, did not.  They purposely left out that political party information.  Didn’t mention he was a Democrat, not even once.  It’s a purely political story, yet the CTV finds no need to inform you that it’s all about yet another DEMOCRAT. 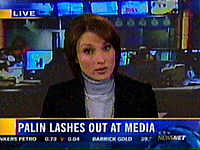 9 – b.  EXTRA CTV BULLCRAP:  In a later story about Sarah Palin speaking out in a new video about how she was treated by the liberal media, CTV’s news anchor takes the time and trouble to inform you all that the video was created by “a conservative film maker” (so in other words, take it with a haYUGE grain of salt, Canadians!).

This was all done over the hilariously false, deceitful, totally bogus, misleading banner “PALIN LASHES OUT AT MEDIA” —hilarious because (a) I saw the video myself, and Palin, in her usual rock-solid, soft, even-keeled, kindly manner, does anything BUT “lash out”—quite the contrary in fact, and (b) Note that the aforementioned Blagojevich, who absolutely positively did “LASH OUT” in his incendiary, rambling news conference that he held, was described in the CTV banner as one who merely “SPEAKS OUT” (see just above), and (c)  ARE YOU KIDDING ME, CTV?  Palin “lashed out” at the media but the media—you at CTV included—didn’t lash, bash, tar and feather, mock, cajole, browbeat, lie, deceive, and marginalize the crap out of Sarah Palin since the moment she was announced as the Republican running mate?  Where was that banner?

11.   Speaking of Sarah Palin, Pamela Anderson (I know, what?  But wait—the connection, you see, is that in order to express her political viewpoint — far-left liberal boob-head — during the presidential election campaign, Pamela Anderson informed the world that that “I can’t stand her.  She can suck it!”, in one of her more eloquent, sober, and lucid moments.  See?),  is at it again.

As the big spokesboob for PETA (the People for the Ethical Treatment of Animals), she and her group want to change the name of fish.  To “sea kittens”.  No no seriously.  This, they think, will help get people off that whole eating fish thing, and fishing.  According to their web site:

They’re slithery and slimy, and they have eyes on either side of their pointy little heads—which is weird, to say the least. … Of course, if you look at it another way, what all this really means is that fish need to fire their PR guy—stat. … And we’re going to start by retiring the old name for good. When your name can also be used as a verb that means driving a hook through your head, it’s time for a serious image makeover. And who could possibly want to put a hook through a sea kitten? … Please take just a few moments to send an e-mail to H. Dale Hall, the director of the FWS [Fish and Wildlife Service], asking him to stop promoting the hunting of sea kittens (otherwise known as “fishing”).”

To celebrate the new name, me and my life partner are going out for sea kittens and chips tonight.

Baltimore Mayor Sheila A. Dixon was charged today by the state prosecutor in a 12-count indictment, becoming the city’s first sitting mayor indicted on criminal offenses.

Dixon was charged with four counts of perjury and two counts of theft over $500, as well as theft under $500, fraudulent misappropriation by a fiduciary and misconduct in office. The charges stem in part from gifts she received from former boyfriend and developer Ronald H. Lipscomb, who was also charged earlier this week.

Dixon, a Democrat, has been the target of a nearly three-year probe by State Prosecutor Robert A. Rohrbaugh into corruption at City Hall

… Councilwoman Helen L. Holton, 48, a West Baltimore Democrat, was charged with accepting a bribe and with perjury, and malfeasance and nonfeasance in office.
—Baltimore Sun today

13.   Canadian Christmas retail sales WAY UP.  Someone send the memo to the economic DOOM AND GLOOM and Armageddon promoters at the CBC and the rest of the media.

* Department stores saw the amount of money charged to credit and debit cards climb by nine per cent over the same time last year.
* Apparel stores had a six per cent growth in credit and debit card sales.
* Every major merchant category experienced spikes in consumer spending on credit and debit cards from the second to the third week of December.
* Only electronics retailers sustained growth into December’s final Boxing Day week, with national sales rising 17 per cent from the previous week.
* Restaurants prolonged their mid-December spike with a healthy increase of eight per cent in the last week of the month.

EXTRA COVER UPness:  CBC.ca also has this story, but apparently ignored it in their usual daily ECONOMIC DISASTER LOOMS! theme today on Newsworld (as I reported above).

Previous article
Time for a Surgeon General-ectomy?
Next article
Fake babies give me the willies