The non-election election talk keeps going and even the Liberals are running.  And by running I mean AWAY from the party and its leader.  Oh and election fights too!

CTV Ottawa Bureau Chief Robert Fife was almost speechless when asked about it.  Among other things, he managed to pull out “bizarre” and said it was just plain “confusing” and simply couldn’t explain it.  He said he thought it was going to “blow up in their faces”.  Imagine the greenhouse gas emissions if that happens!

On the liberals’ Mike Duffy Live show, Mr. Duffy keeps referring to it as a “marriage of convenience” or more amusingly, he said maybe it was just a “date of convenience, or whatever”.  A one-night-stand, I guess, if you will (and I hear they will—they’z liberals!).  Remember, however, that Mr. Duffy was the one who when speaking about the wife of the Jack Layton, leader you’ve got to be kidding party, called her his “life partner”.  Again, “life partner”.  So the contradistinction here is that May and Dion aren’t life partners—they’re only married for convenience political partners, or dating for convenience political partners.  Being liberal is hard!

I thought of this one, built on Mike Duffy’s “marriage of convenience” quip:  I always knew the liberals all love and push gay ‘marriage’,  but I’m a little surprised they go for May marriage.

Also this:  When I call Dion “the Green Guru”, I never meant it that way! (Nor did the CTV reporter who actually called him that in a “news” story).

Then old you’ve got to be kidding party leader Ed Broadbent said he was “astonished…  astounded”.  He later shocked me when the old guy went all “libero-sexy” on us and told us that he had inside knowledge of the fact that Greenie Elizabeth May was actually going for “a three-way” between the Liberals, the Greens, and the you’ve got to be kidding party.  A three-way?  Those liberals!  (And by the way: barf).  And those liberals denied gay ‘marriage’ was going to “progress” beyond the mere man-on-man and woman-on-woman ‘marriage’ of convenience. We told you there’d be three-ways soon!

Genius Liberal Party creator of Liberal Party election-losing strategies and liberal-left hidden agenda-revealing boffo missteps Scott (“Beer and Popcorn”) Reid informed us it was “a smart thing to do politically”.  Well of course of it Mr. Reid.  Pass the popcorn, genius.  He also repeatedly said he doesn’t understand why people are “freaking oat” aboat it.  Yes, “oat”.  Not “out”.  “Freaking oat”.  “Aboat” it.

Thousand-year-old reporter Craig Oliver said (and let’s be clear—he said it as if it were a good thing) “May now has a chance to win against Peter MacKay”.  Well okay that could happen I guess, but honestly, that’s about the silliest prediction I’ve heard since the one about getting to the bottom of the Liberal Party’s adscam sponsorship corruption scandal and all the players involved.  Not. Gonna. Happen.

But I have to leave it to the great communicator, Liberal Frenchman Stephane Dion himself to explain it.  Please note that you won’t likely comprehend it at all whatsoever, since I did not adjust the audio one iota, and did not translate it for you (it’s in Dion “English”). 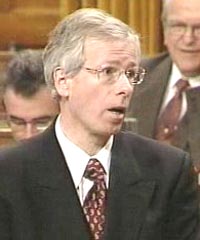 UPDATE April 16 2007:
Green “leader” Elizabeth May has now bowed to pressure and taken Potvin off the Green ticket by refusing to sign his nomination papers.