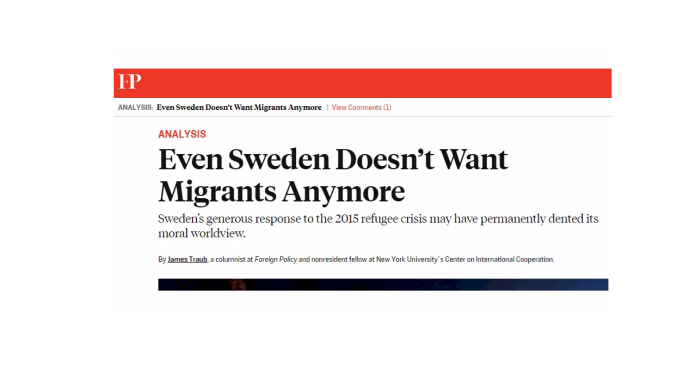 ONE:
The Vancouver Sun (not a racist newspaper or a right-wing one) columnist Douglas Todd (hardly a right-wing guy and also, unrelated, not a racist) mentions immigration in his list of five things causing the real estate prices to get entirely out of control in Canada’s big cities:

…Canadian business leaders and pundits, for unexplained reasons, rarely discuss how large-scale immigration is the main source of population growth and therefore of much housing demand for cities like Vancouver, Toronto, Calgary and Montreal.

Their silence prevails even while groups such as B.C.’s Urban Development Institute quietly confirm the arrival of more than 100,000 new immigrants, foreign guest workers and international students into Metro Vancouver each typical year is the key reason supply needs to be cranked up.

TWO:
Favorability polling for Joe Biden (hardly a right-wing guy, and ostensibly not a racist) is badly underwater generally, but he is polling especially poorly on immigration. His pretty much open borders, unchecked immigration policy is not just wreaking havoc on the US border, but on his own political future and that of his rather mindless pro-endless-immigration party. 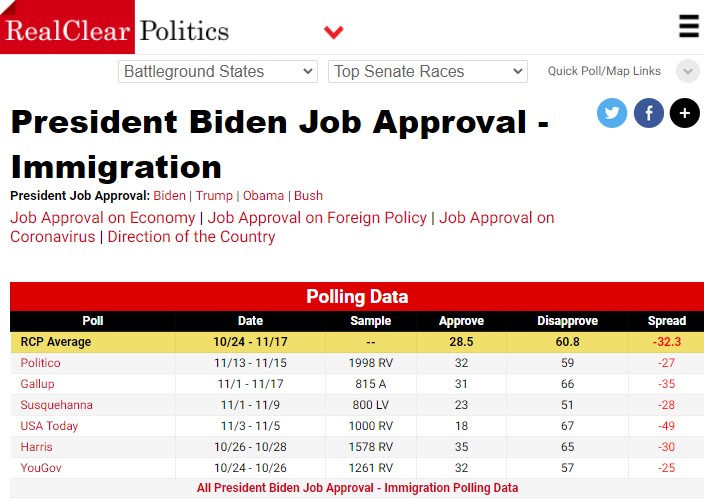 THREE:
An article at ForeignPolicy.com (hardly a right-wing outfit and not seen as racist by anybody) puts paid to the reputation that Sweden (hardly a right-wing country nor one seen as racist) had, for about 13 days, as a model for immigration policy —one to be copied throughout the west. Such a policy persists in Trudeau’s Canada (although Canada’s “leader” dubs Canada as not merely “racist,” but “systemically racist” — he’s a blitering idiot in this regard) and Biden’s USA (not a racist country, anyway), and in both countries, polling already provides enough of a hint that the policy is harmful at least politically. (For Canada’s, see, for example, Bloomberg: Trudeau’s Plan to Ramp Up Immigration Falls Flat With Canadians wherein it explains that “Only 17% of respondents say the country should accept more immigrants in 2021 than it did last year…” — which Trudeau blithely ignored.)

In Sweden, the open immigration policy has failed, by their own account. And they — and more particularly the left-wing party that once promoted it and oversaw it — now admit it has done far more harm than good, and have joined Sweden’s right-leaning parties (who just a couple of years ago they used to denounce as “racists” and “fascists” and “Brownshirts” and such) in denouncing what was, just yesterday, their own wonderful and benevolent pro-immigration policy, according to this article.

Sweden’s ruling left-wing NDP-like “social democratic” party (conveniently called Swedish Social Democratic Party) once boasted of having among the highest immigration rates of any country, because, see, one of their virtues was that they were not racists, and this is how they signalled it to the world. But it has reviewed the results, and now eschews immigration as the cause of much of their country’s social ills. It’s a reasonable conclusion if facts are still “a thing.” (They aren’t here. But I acknowledge begrudgingly that in the odd instance, Europeans are more advanced or at least logical in their thinking than we are here. So maybe next year our politicians will catch up, and in 2026, Erin O’Toole too.)

Here’s an extended excerpt, but I would read the whole three-minute article if I were O’Toole, Trudeau, (I’ve given up on Singh as a reasonable person), a random Canadian MP, or I cared about Canada. Because facts and statistical science if not also polling.

…Swedes have learned since 2015 that even the most benevolent state has its limits. In recent years, the country has suffered from soaring crime rates. According to a report by the Swedish National Council for Crime Prevention, over the last 20 years, Sweden has gone from having one of the lowest to one of the highest levels of gun violence in Europe—worse than Italy or eastern Europe. …

It’s hardly surprising that newcomers lag behind Swedes on every index of well-being, but the gap is very large. In a recent book, Mass Challenge: The Socioeconomic Impact of Migration to a Scandinavian Welfare State, Tino Sanandaji, an economist of Kurdish origin who has become a leading critic of Sweden’s migration policies, writes “foreign-born represent 53 percent of individuals with long prison sentences, 58 percent of the unemployed, and receive 65 percent of social welfare expenditures; 77 percent of Sweden’s child poverty is present in households with a foreign background, while 90 percent of suspects in public shootings have immigrant backgrounds.” Figures like these have become widely known; the number of Swedes who favor increased migration has dropped from 58 percent in 2015 to 40 percent today.

… Sweden is no longer a welcoming country and does not wish to be seen as one. …  Last year, the country accepted only 13,000 refugees, the lowest number in 30 years. A recent study written by a senior Swedish migration official concludes that Norway and Denmark, both notoriously inhospitable to refugees, are “increasingly seen as positive examples of how to deal with refugees and international migration.”

Social Democrats are hardly alone in their shift to the right.  …

And it goes on with other progressive doctrine-destroying gems like that.