Did the Grouse Grind yesterday 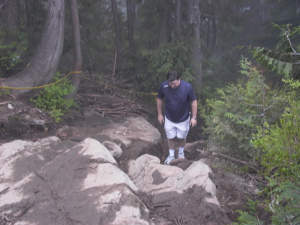 Here’s me, at full stop, literally staring down the last few big, steep, steps of the Grouse Grind.  I finally convinced my legs to take the needed steps. (My legs are liberals).

And no, liberals, don’t worry: the Grouse Grind is not some cool new sex move you’ve been missing out on, it’s a famous hike up (damn near straight up) to the top of Grouse Mountain in Vancouver.  That’s right, you hike up, instead of taking the mass transit “tram” option, thereby saving all that gondola-drivin’ electricity.  Well actually you take the tram back down from the top, so never mind. Plus your panting lungs turn so much oxygen into carbon dioxide, the “man-made global warming” effect is just off the charts.  So like whateva.

I’m finally in the cool crowd now because I did it.

How was our time?  Well, me and my crew did it in less than, well, less time than it takes to get knee surgery in Canada, which I may now be in line for.

There’s no two ways about it: it’s a grueling hike that no normal person would ever do twice, yet it was my wife’s third time.  This time was her slowest only because she felt pity for me and didn’t want to leave me behind.  The two other gals in my crew beat us by 40 minutes.  They’re half my age though, so shut up.  (And I can’t explain my wife’s freakishly good conditioning despite her being only a year younger than me, except that she “exercises” and runs “marathons” and other weird stuff instead of sitting at a computer all day every day wasting time exposing liberal-left lunacy).

Here’s my crew: Kaula and her partner Tara,  and my wife Jo-Anne
— three dames who could Grouse Grind me to a pulp. 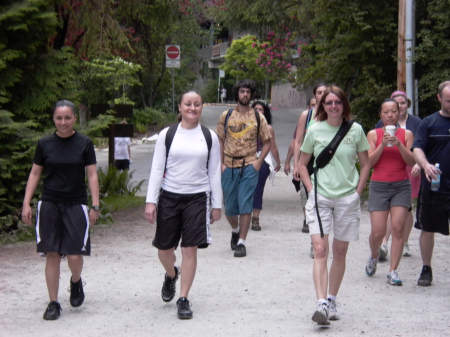 When you get to the top, there’s a cafeteria and restaurant and bar and such, but it’s pretty, uh, malodorous.  I had a beer anyway.  My li’l celebration.