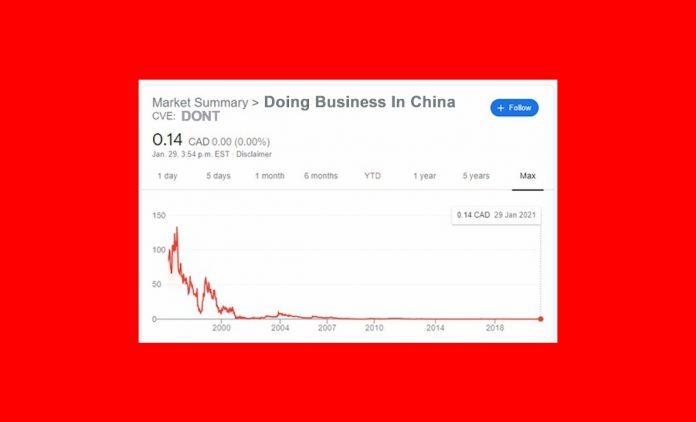 I mean are these people even paying attention?

A Canadian-based mining firm is in a battle to keep the Chinese Communist dictatorship from literally nationalizing their company —”nationalizing” being a polite term for what socialists and communists — whether in China or here in Canada — seek to do as a matter of policy insofar as resource industries, and most other industries, too.

Hey here’s a quote!: “Therefore Be It Resolved that the NDP actively campaign for nationalization of the major auto companies, to be operated under workers’ and community control…” (Also all banks and insurance companies in Canada, and…) — NDP socialist caucus resolutions, January 7, 2021. Actual quote.)

But as usual, we’re to ignore all that left-wing stuff — in Canada.

Meanwhile, Robert Fife has the story of Chinese nationalization lament, because for some reason the Globe and Mail lets him do China stories like this and bandy about terms like “state-owned” without the slightest air of irony.

“[President and CEO] Ms. Chong said Dynasty’s minority partners [the Communists] are trying to steal the company away from her with help from Chinese courts.”

Now, this publicly-trading ostensibly Canadian mining company is already in a dual-ownership arrangement with the Chinese communists (by choice, we’re to understand). And they are operating in China, and in fact in an area known to harbor (well, imprison, and reportedly torture, actually) Chinese Uighur Muslim slaves, and force them into political re-education and indoctrination camps and such, so that’s a massive caveat in case you’re making the mistake of being sympathetic toward this company.

Personally, I’m find it hard to even summon the shit to give, but that’s me.

So, given the geography they chose to operate, and whatnot, I’m not really in the mood to help them, but when a government nationalizes your company, yeah, that sucks on account of the authoritarian and socialist evil inherent within. I’ll give her that.

““They simply took our mine. Our partner is the Chinese government in Xinjiang and so we have been asking for Canadian government help for the last while but we have not got any,” Ms. Chong said.”

Where did Canadians get the idea that doing business with a communist Chinese dictatorships was a good idea (or voting NDP, for that matter)?

Maclean’s, in November 1994, couldn’t contain the enthusiasm these boosters all shared. By all, I mean all of the Canadian news media and the Liberal government (in this case), and all its corporate partners, working in perfect harmony in concert with each other in exact unison and on the same page together in synch as buddies and bros or like they’re married to each other and sharing a bed or are in fact all the same person with the same brain. 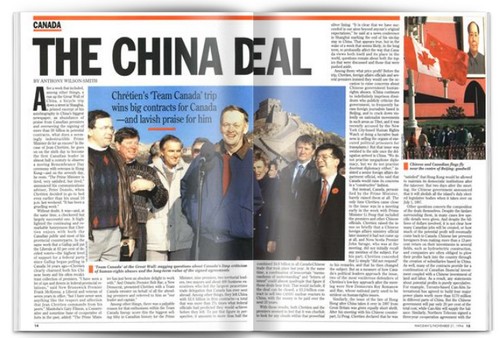 Globalists just loved — LOVED — all those “Team Canada” junkets to China with the corporate class (who were also, by pure coincidence, often their own political funders, and the employers of various politicians and government employees too). They would literally go over there together, on a government chartered jet, and bow to the Chinese together and, again literally, make deals with the devil, exactly and precisely like this Dynasty one. The Chretien government got so excited they jumped the shark, and sold them on two Candu nuclear reactors, to be built by SNC-Lavalin no less, and we even financed the deal! Justin Trudeau has more recently said of all the political concepts in the world, he most “admires” China’s “basic dictatorship.”

So I have a pretty good idea where they got the idea.

Sure, now that you’ve gotten yourself into a sticky bit of corporate shit, ask me and my countrymen for help, because you have no shame, and the media will write it up of course, but this actually sounds like a you problem to me. A Chong, Trudeau, Liberal, progressive, greedyfolk, globalist problem. A problem brought on by a political ideology and at least some measure of greed. Has utterly nothing to do with me, and in fact, quite the contrary.

Read this bit and see if it doesn’t sound familiar to those of you who are trying to start or run an ongoing business in Canada in competition with your own state; and those of you who have followed this site for the past twenty years:

““I have been trying to tell them [Canadian embassy in China] we are a small Canadian company that is up against a state-owned company, controlled by the Chinese government, and they have the backings of their courts that are not independent,” she said. “Our government needs to stand up and protect Canadian interests.””

The difference being that it’s China’s government, not Canada’s. And that’s the only difference.

I have sympathy for Canadians in Canada going up against their own government in Canada with whom they have to compete; and against their own courts which the Trudeau Liberals and successive years of other Liberals have stacked from top to bottom with liberals and sundry progressives, and tarnished in other SNC-Lavalin-ish ways, and whose independence has thus been called into doubt.

So no, I’m gonna have to give your call for help from me a giant pass. You took a stupid risk. You might have made a billion dollars, but it didn’t work out, now suck it up. That’s how the free market works, unlike in socialist states like the one the NDP socialists envision, and in full-on communist states —which if you’ve been paying attention, all have a stated policy of doing exactly what they are doing.

Meanwhile, Dynasty stock hasn’t been doing great. They claim it’s worth a billion dollars U.S. By my calculation its market value is about 4½ or 5 million dollars Canadian. If the Chinese communists want this one, imagine how much they’d want Apple or Tesla! Here’s a chart which I swear I haven’t Photoshopped: 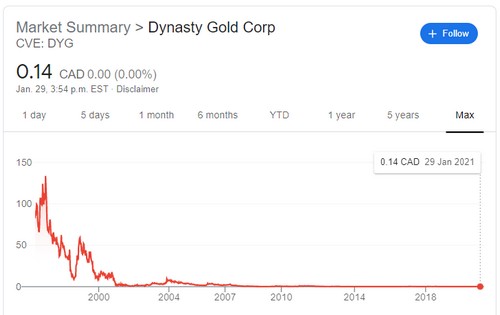 Previous article
The election’s over. Well. So ackshully, they should have been more transparent about their perfidy.
Next article
Hypocrisy flies over his head: John Kerry’s private jet runs on gas but it’s very special gas.