Surprising to not one single soul who is even remotely in search of the great book “GODLESS”, Ann Coulter’s latest (of five) huge best-sellers; or the great thinker Mark Steyn’s best-selling book “America Alone”; or, say, Bill O’Reilly’s huge best-seller “Culture Warrior”, the Chapters – Indigo “Christmas” catalogue, which they call their “Holiday Gift Guide 2006” is out, and it features none of them, nor virtually any of the other huge best-selling conservative-tolerant books of late.  Left-wing books?  Oh yes of course.

Chapters – Indigo is owned by liberal-leftist Heather Reisman, who with her billionaire husband are Liberal Party stalwarts and fund raisers.  ProudToBeCanadian.ca readers will recall a recent column by “our” columnist Barbara Kay, called “Ignoring Canada’s conservative readers” in which she touched on this subject, as well as my numerous blog entries about this issue, as well as several columns by our other columnists similarly speaking about this issue.

In their 56-page “Christmas” – no sorry—“Holiday” flyer (which is nonetheless decorated with Christmas – no sorry “Holiday” decorations like Christmas lights and wreaths), they have a two-page feature which lists the books for the thinking man and woman.  For the smart set.  These are the books they recommend for the modern smarties in Canada today.  They call it their “big ideas” selections.

It might more appropriately be called the far-left anti-Bush environut CBC-luvin’ Communist-curious section.  But no, they stuck with “big ideas” because ideas are only “big” if they’re leftist, if I understand correctly.

Click these thumbnails to see them bigger in a popup window 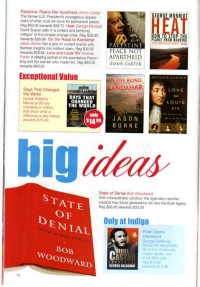 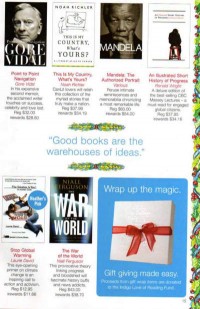 Here’s some of their selections, in case the scanned graphic doesn’t come through clearly enough on your capitalist computer materialist consumer monitor product from the evil United States which is currently governed by that war criminal Bush and his fascist dumb-dumbs:

** For the anti-Bush set, the already passé “State of Denial” by Bob Woodward.  More Bush is an obtuse ignoramus elixir for the liberal-left masses of automaton stupidity.

** Still more for the anti-Bush and anti-Israel set: an offering from one of the liberal-left’s favorite sons, the worst president in recent history, Jimmy Carter, and his “Palestine – Peace Not Apartheid”.  Reviews I’ve read of the book suggest it constantly gives the terrorists a pass, while bashing Israel.  Wow, that’s surprising since it was written by Michael Moore’s seat-mate at the last Democratic Party convention, Jimmy Carter.

** Extreme leftist moonbat Noam Chomsky wrote about this other selection:  “Essential reading . . . The most illuminating study I know . . . gives remarkable insight into Islamic militancy.”  That’s a clue about the nature of “On the Road to Kandahar: Travels Through Conflict in the Islamic World” by Jason Burke.  Another reviewer wrote:  “It should be compulsory reading for Rumsfeld and his clique.”  The book’s own description includes this phrase:  “On the Road to Kandahar shows how various and completely unmonolithic Islam really is and how the sort of standard Western generalizations about it are both stupid and dangerous.”  Point taken!

** This one really takes the cake:  a book by flaming idiotarian and U.K. leftist in the Cindy Sheahan mold George Galloway.  And it’s a book about…. COMMUNIST dictator/hero to Canadian liberals Fidel Castro.  It’s called “Fidel Castro Handbook”.  Rather ironic for a Christmas catalogue, dontchathink?  Then again, it’s a “Holiday” gift-giving catalogue.  Indigo’s crack review team describes it thusly in their “Holiday” flyer:  “Revisit the remarkable life of the charismatic Cuban leader, now in his 80th year.”  Oh yes—rejoice!  For thine is the kingdom….

** No Canadian liberal would be able to sleep at night without reading the book about the rabidly anti-Bush (and therefore liberal-left hero) Nelson Mandela, who accused President Bush of being a racist because he didn’t suck up to the black leader of the liberals’ sacred United Nations, Kofi Annan, and who tried to instigate riots against the Bush administration, which he said was trying to plunge the world into a holocaust.  The book is called “Mandela – The Authorized Portrait”.

** I wondered if the taxpayers of Canada paid for the new book about the state-run CBC’s “Massey Lectures”  called “An Illustrated Short History of Progress” by Ronald Wright.  “Progressives” will love it—as my wife, who read it, told me.  She read the original version, which wasn’t illustrated.  So these pictures is a coup for second-tier sales of the “History of Progress”.  Yay, I say! Indigo catalogue says: “a must read for engaged global citizens”.  See, if you’re not a liberal-leftist, you’re stupid, like George Bush. See?

** Not done with the man-made global warming tripe, Heather Reisman’s Chapters – Indigo wants you to buy “Stop Global Warming – An Activist’s Guide”.  In fact, it’s “Heather’s Pick”! I guess that’s sort of like the Oprah Book Club, only this is a pick by an overt liberal political hack.  It’s written by the well-known global climate scientist genius Laurie David, whom I’ve never heard of, so I looked up.  Turns out she and her co-author husband Larry are not global climate scientists at all.  Laurie is a liberal political activist, who produced leftist nutbar Al Gore’s alarmist, leftist “documentary” called “An Inconvenient Truth”, which is actually nothing but an insufferable pile of fear-mongering, lies, and garbage.  Husband Larry is the Hollywood liberal we all know fairly well as the producer of hits like Seinfeld, and as a liberal politico.

** In a perhaps unwitting nod to the “big ideas” of the right, if indeed they have any at all according to “Heather”: a book by Niall Ferguson is offered, called “The War of the World”.  It is the only one of 13 books in the spread.

Previous articleWhy I Smoke (Cigars)
Next articleWorking Mothers Need The Free Market, Too