Canadian Liberals: You didn’t build that 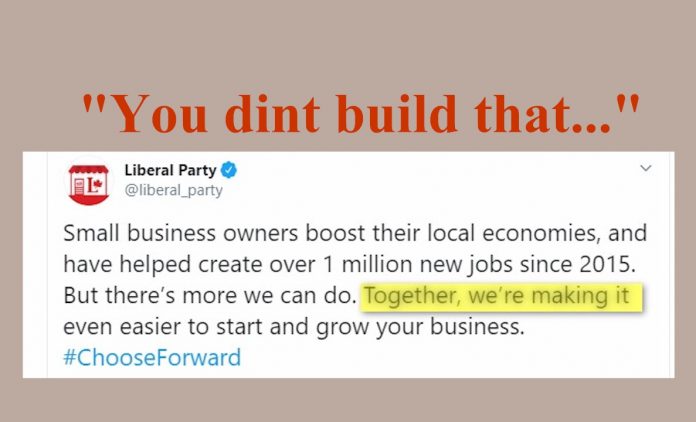 Jeez, Liberals, this is just awful language for a political party to be using in a free country. “Together, we’re making it…” they say — implying the government (or the Liberal Party, which they evidently believe is the same thing) must work with, or bestow upon the citizens the ability to make a living or run a business. (Also, they’re lying about it being easier.)

Small business owners boost their local economies, and have helped create over 1 million new jobs since 2015. But there’s more we can do. Together, we’re making it even easier to start and grow your business. #ChooseForward pic.twitter.com/GoDe4qVEZW

That kind of language plays well in China, at least among The Party members, their sycophants, and the useful idiots. But here, in a free country, I don’t want to do anything “together” with the government — not in the bedroom, not when I’m buying beer, not when I need car insurance, not when I read or watch the news or watch TV, and certainly not in my business. This is manifestly because Canada is not communist China. And I don’t think Canada should try to emulate the totalitarian communist dictatorship of China.

This subtle but ideologically important language should speak loudly as a warning to businesses accepting this kind of messaging and falling for the notion of working “together” with any government by accepting any form of payoffs like government grants, subsidies, loans, or really, any kind of help or cooperation at all whatsoever. It’s from the Liberals but damn, it sounds so much like a totalitarian socialist message.

It reminds me of the very revealing gaffe Barack Obama made when he implied no business person built anything on his or her own, sniffing, “If you got a business, you didn’t build that, somebody else made that happen… .” Spoken like a true socialist, who can’t accept that individual enterprise is possible — only state-owned or controlled “businesses,” or government “collectives” or government-derived sponsorships with proletariats.

Closer to home, it also reminds me of the Canadian Liberal advisor Scott Reid’s glorious “beer and popcorn” (see video) fiasco back in 2005. That one had the benefit of reminding Canadians that the Liberals really are that bad, and they really do think they — as a party, and as a government (in China they are the same thing) need to run your lives. Because unless you let them, you won’t do it right. You’ll wreck your babies. Wreck your own lives. Your retirement. Your business. They know best about how to manage your money. You can’t make it on your own — especially if you’re a woman or non-white. They need to give you some of that state money, to sponsor you, “partner” with you, or else you’re not going to make it.

And you become reliant upon the state. You’re a serf.

Then, naturally, by definition, they control you. They can, and do, tell you exactly what to do, how to live. And even how to think, or at least force you to declare that you think their way. “Together” with you.

In a real life, actual example, Trudeau requires businesses to sign a declaration stating that the business agrees with the Trudeau/Liberal stance on abortion (pro, as if I had to tell you). That’s the actual requirement to get a summer jobs grant. You can see the problem here — the slippery slope — if you’re a fan of freedom of thought and conscience and speech. You can see the principles at stake. The perfidy.

There are some corporate leaders who actually subscribe to this. They’re socialists. Or communists. Or utter nincompoops. Or they’re current recipients of corporate welfare, or they work for the state-owned CBC. But I don’t think most normal Canadians want to be reliant upon the government, or have them towering over their lives, telling them how to live, how to act, how to think, what to eat, what words we are to use when speaking, and living under an all-encompassing or totalitarian regime. They don’t want to work “together” with the government — quite the contrary — they want to do their thing, and want government out of the way. Canada isn’t about The Government. Our lives are not — should not be — contingent upon The Government.

The message I want to hear from political parties is not that they want to do business “together” with businesses or citizens, it’s that Government should back the hell down. Get out of our lives. Canada is a nation of individuals. Not government serfs. This isn’t China.

Why do Canadian Liberals seem to want to be like China? Because they “admire their basic dictatorship?”

P.S. — I also hate this sentence in that tweet: “Small business owners boost their local economies, and have helped create over 1 million new jobs since 2015.”  What’s with the notion that small businesses “helped” create these jobs? Helped who? Didn’t they do it themselves? Or what — they didn’t build that?