For those of you who, like me, refuse to just shut up as told to in arguments and discussions with liberals, progressives, and leftists, here is even more science and more facts to back us up. (They HATE it when we have all the science to back us up). Add this to the pile:

Opinion: The results are in — there is an ingrained bias in academia against conservatives
By Christopher Dummitt & Zachary Patterson, March 4, 2021

A report released this week shows clear evidence of a significant political slant in Canadian (along with American and British) universities. The report finds that 73 per cent of Canadian social science and humanities academics identify as being on the left, compared to just four per cent who identify with the right. This makes universities substantially more politically skewed than the general population.

The report, by the U.S.-based Centre for the Study of Partisanship and Ideology, suggests that the over-representation of left-wing views in universities creates an environment in which structural discrimination against conservative perspectives is pervasive.

True, obviously. But who will take notice? Who cares —aside from people (of all political perspectives) who love democracy, fairness, freedom, diversity, inclusion, tolerance, etc; and of course the conservatives, who actually won the last Canadian election popular vote despite Trudeau and the Liberals winning? I’ll tell you who cares besides those people: Nobody. And even among those people I listed, very few of them care either. Otherwise things would not be where they are. Things got this way because virtually nobody spoke out, much less (fewer) acted.

Who will take notice of this new study? Pretty much nobody. The National Post was nice enough to publish the op/ed, but just try to find news of this anywhere else (besides here). It’s a horrible situation educationally, culturally, politically and in myriad other ways, particularly as these are (in Canada anyway) almost entirely publicly-funded institutions. But the Globe and Mail isn’t on this. Nor is the state-owned CBC, or liberalvision CTV or anyone else. See what I mean about caring and who will notice?

The authors implore you:

…the consistency of findings across many Western countries and over a number of distinct studies, all of which find similar results, suggests that this is a widespread problem. Policymakers in this country should take notice.

But the “policymakers” are similarly left-wing ideologues! And they love this! They don’t need this ammunition — they already know it full well. They don’t want to change it! Their vested interest is primarily in seeing the final demise of all that is conservative and traditional and normal, so that they can “rebuild better” (™ etc), meaning, create their own model of state starting with the progressive move to the left and ending in the full-on socialism they always dreamed of. Full government control over your lives, is their goal.

So look for no change.

There are solutions offered. Left unsaid: They — “the policymakers” — were voted in. 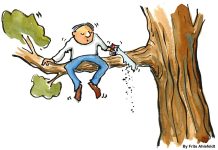 They shunned “liberal” when that turned sour, and became “progressives.” Now that’s out too?