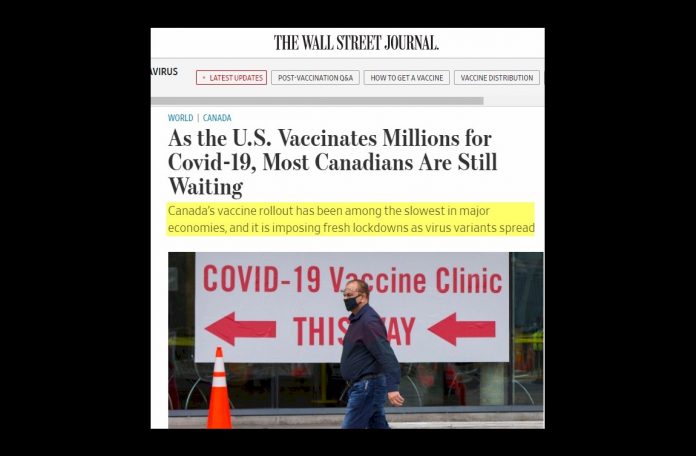 I’ve read article after article ripping on Canada, but when one of the biggest newspapers in the world is hitting this hard with this huge article (my yellow highlighting), even liberalvision CTV might notice and start covering the story of big government failures: 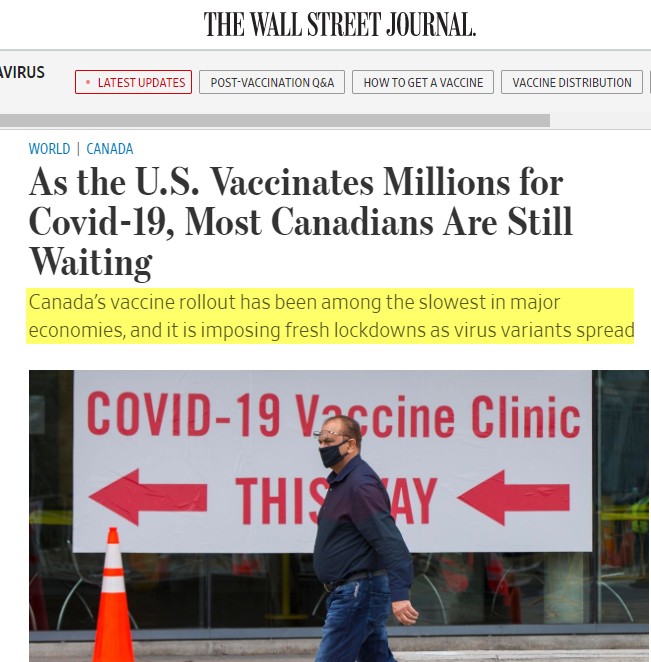 Included in that news report are real pride-inducing remarks like this:

The U.S. economy is opening up and Covid-19 vaccines are increasingly available. But its neighbor to the north has had one of the slowest vaccine rollouts among developed economies, and is now imposing new lockdowns to stem a surge in infections.

… But Canada has been slow to get those shots into people’s arms, and Canadians have watched with envy the progress in the U.S.

It explains, “The country’s vaccine rollout, stymied by supply-chain problems and a lack of coordination at the federal and provincial levels…” (which has led to the U.S. fully vaccinating TEN TIMES more people than in Canada per capita), as the root cause.

But the article also allows, almost as an excuse, that, “Unlike the U.S. and Europe, Canada doesn’t manufacture the vaccines.” That obviously gets closer to the actual root cause —but still doesn’t quite get there. Like, why aren’t there manufacturers in Canada?

Drug companies will avoid Canada until a workable environment for them is allowed. And now, that isn’t the case (see the articles below). Because, sadly for big government and central planning and market control freaks, we live in a (mostly, albeit decreasingly) free world where companies can set up (or not) most anywhere they please —or at least where they are welcome. Canada needs improvements in markets, and pharmaceutical innovator intellectual property protections and failing that (as thus far we have), no drug companies will establish a base here, long-term.

I’ve written on this a number of times. Like here:

But if you hate admitting that I am such a genius, the Fraser Institute is always a good go-to, to gain an even better perspective if that’s even possible, with far more serious, academic, peer-reviewed studies and explanations and analyses of just what the hell the problem or “root cause” actually is, in any given government policy or market situation.

And they adroitly explain the problems surrounding Canada’s failures with its pharmaceutical industry (or lack thereof) in multiple articles. As I read it, the problem is, as usual, rooted not in laziness among the business class or innovator set, nor lack of drive by pharmaceutical companies —and no, CTV, nor in “greed,” or “fat Americans,” nor “racism” or “white supremacy,” nor even “American gun culture.” No, rather, it’s big central-planning done by market-control-obsessed ideological government, and its constant interventions in the market. As usual. And particularly, here in laggard Canada, the Trudeau government’s ill-timed (2019) policy to impose further price controls on drugs sold in Canada. An in-depth study explains:

…While the Canadian government’s goal of containing expenditures on patented drugs is not unique, the direction of its regulatory policy changes seems to be focusing more on controlling expenditures on pharmaceuticals than on ensuring that Canadians have access to new therapies. …

And in another article:

Canada and other countries that impose strict price controls on pharmaceuticals should acknowledge that effectively requiring U.S. consumers to bear the cost of developing new drugs that benefit patients everywhere is unfair and unsustainable. As the remarkably rapid development of COVID-19 vaccines demonstrates, pharmaceutical research is increasingly capable of miraculous life-saving innovations. Canada and other countries should be willing to pay their fair share to support such research.

Other Fraser articles explains other problems, and again these are problems created by Big Government, including this one:

…Currently, Canadian intellectual property (IP) protections for pharmaceutical innovators are weaker than those in the US, EU and elsewhere in three key areas. The first is patent term restoration, or restoring patent time lost to mandatory regulatory delays: Canada offers none while both the U.S. and EU offer up to five years. The second is on a right of appeal for patent holders, or allowing patent holders in Canada the right to appeal court rulings that invalidate their patent. The third is extended data exclusivity, the time during which generic manufacturers are not permitted to use innovator data for drug approvals: Canada offers up to 8.5 years, the EU offers 10 years plus one year for new indications, and the U.S. offers five years plus one year for regulatory delays plus three years for new indications for pharmaceuticals and 12 years for biologics. …

In pharmaceuticals as in other industries, our socialized healthcare system — and left-wing-adjacent ideologies — are leading to government, as the “customer” or central buyer in this case, using its overbearing power and authority to try to control the erstwhile free market including supply management and prices —a design which is destined to fail, just as it has done over and over, in every socialist and communist country the world over, and even in excessively market-interventionist countries (like Canada, increasingly), throughout modern history. But these left-wing ideologues are a stubborn people, and they yearn to prove themselves right, even if these know-it-alls and their fiddling and perverse ideological fantasies kill Canadians — as has been done — in the process, and even if they pose an existential threat to our very nation, as they have.

It’s not the free market that is failing. It’s not private enterprise that is failing. No, the free market and private enterprise are inarguably what brought us — with amazing speed once government got out of the damned way thanks to Donald Trump’s “Warp Speed” program — the first Wuhan Virus vaccines and treatments (yes, hastened in this case especially by massive, timely U.S. government — but not Canadian government — investment). What failed — certainly in Canada — as the Wall Street Journal pointed out without naming specifically, is government.

As I’ve pointed out before, this whole Wuhan Virus and everything else that has failed after its release from China, was 100%, entirely, completely, utterly, and in every way, shape, and form, a government failure at every level of government, of epic, historic proportion —in China, as well as in Canada, and all over the world.

Previous articleCDC issues dire code-red warning to avoid all travel to Canada
Next article“We’re on our way.” And it’s not to a good place.