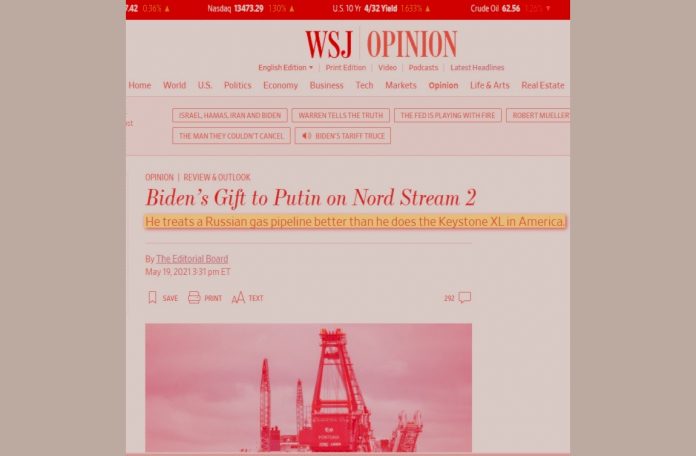 Democratic Party President Joe Biden canceled the Keystone pipeline on his very first day in office, so important was it for him to say shove it to Canada in the most auspicious way possible, and shove it to to any oil and gas enthusiasts (like Democrats who live in heated homes and drive cars or fly). In the process, he also flipped the bird to thousands of Canadians whose jobs and investment were summarily killed. Thousands of American jobs were lost too. Celebrations all around, amongst the left.

On his first day! It was that important to him, you know, for climate change and whatnots. He now also supports Democratic Michigan Governor Whitmer’s insane embargo against Canada as she blocks the Line 5 gas line from Michigan to Ontario and Quebec. To stop all the global warming and etc., dontchaknow.

Yet Biden, hot off the story of a devastated U.S. gas line company that was attacked by allegedly Russian hackers, causing untold mayhem and extreme concern in the U.S. north east, has today happily signaled his support for Russia and Vladimir Putin and their nice new gas pipeline to Germany by dropping U.S. sanctions against it. Even if that made political or economic or moral sense which it mostly certainly doesn’t, it’s a very tendentious gas line being built from nasty Russia to supply Germany, and is broadly seen as a terrible decision by Germany, which even the E.U. is against. This Biden decision comes even as Russia and Putin carry on as despots, national security threats, international espionage rats, and global villains.

Wall Street Journal Editorial Board writes it up succinctly:

…While the Biden Administration wants to target Russian ships working on the nearly complete pipeline, the company running the project and its CEO won’t face sanctions. State will recognize that Nord Stream 2 AG and its leader—a former East German intelligence officer—deserve to be sanctioned. Yet restrictions on a Putin crony will be waived in the name of “U.S. national interests.” This is the kind of move that prompted the media to assert that Donald Trump must be a Russian agent.

The decision suggests Mr. Biden doesn’t want to blow up his relationship with the German government, which strongly supports the pipeline. But this gets it backward. The project generates bipartisan opposition in the U.S., and in April the European Parliament called for it to be stopped. Germans have the responsibility to avoid damaging relations with Washington and the rest of the Continent. …

… As one of his first official acts, Mr. Biden shut down the Keystone XL pipeline that would improve U.S. energy security. He is treating a pipeline that increases Russian influence and income better than one that enhances America’s.

Naturally the WSJ isn’t necessarily concerned with Canada’s situation — Canada’s “energy security” as they say of the U.S. — since that is not their job, it is supposed to be Trudeau’s job and the job of Canadian voters. Nonetheless, Canada is the story’s real kicker here. Or I should say, Canada is the one who’s ass is being kicked, here, by a woman and a 78-year-old old man.

How proud are we?!

This latest ass-kicking aside, this whole pipeline question is increasingly fraught with irony after irony, and by increasingly fabulous displays of hideous lies and hypocrisies from every leftward-pointing angle.

Regarding Line 5, Leftist Governor Gretchen Whitmer (D) is closing it based on supposed environmental considerations of some fashionable sort. Leftist PM Trudeau (L) and his bobblehead Liberals along with every Liberal and NDP voter in Ontario and every leftist voter in Quebec, yammer on all day long about the horribleness of building pipelines in the west (or anywhere at all), with all their very fashionable and cool-sounding climate and environmental gibberish, parlaying it only to help achieve their very yummy political ends (as they drive their cars, heat their homes, fly in jets, and take cruises). Yet here they are now facing a devastating shortage of gas and petroleum products as a partial result of the anti-pipeline rhetoric they themselves engage in every day — and base their entire vote on. And now they’re worried, and complaining. Complaining, and trying every angle to get nasty Whitmer (D) to change her nasty mind, and trying to get nasty Biden (D), who just kicked their ass and all of ours, to help them change nasty Whitmer’s nasty mind. To get the oil and gas they actually love and crave and require in pursuit of their fashionable lives.

Life can be nasty when you lack principles. Or vote Democrat. Or Liberal.

And what could have helped them avoid all this suffering and hypocrisy and even the accompanying nasty embarrassment? A Canadian pipeline, built in Canada, serving Canadians, using Canadian oil and gas, built by private Canadian investment using countless thousands of Canadian workers across the Canadian nation. Trudeau and the Liberals quickly and rather inexplicably shuttered any hope of a trans Canada gas and oil pipeline from Alberta to the east (called Energy East) early on in his career as PM, again for supposed environmental and climate change reasons. But if we’re honest, and principled, one simply has to acknowledge, because we’re not completely stupid, it was for pure partisan ideological and crass political expediency reasons. Certainly not for our “energy security.” Not for our economy. Not for climate change. Not for our job growth or investment prospects. But again, back then, it was celebrations all around. It was cheered by all of Ontario’s Liberal and further left voters, by most of the news media, and by everyone in Quebec except maybe three people. Because Liberal. Trudeau. NotConservative™.

Now they’re bitching about their shiny Democratic Party big sister in Michigan, and Uncle Joe in D.C. who they thought were like family but instead ended up getting a can of whoop-ass.

In addition, all center-left and leftist voters and politicians pretended for four years (and some still do because alas, some people are simply stupid) that Donald Trump was “a Russian spy” or a dupe being paid-off by Russia, a stool pigeon, or a secret “Russian asset” as they kept saying, loudly, on MSNBC and CNN for four years, with Canadian news media playing right along like the blinkered liberal-left numskulls and suckups they are. But look here, as the sober and conservative Wall Street Journal editors quietly point out, it’s Joe Biden who is behaving exactly as if he were literally in the pocket of Russia and a gas pipeline company. A Russian gas company mind you, not the Ukrainian one his son literally got into the back pocket of (and possibly dad too, although that element is still lacking evidentiary detail unlike that of his son) — but the news about which Twitter and most of the news media literally censored, on account of free speech and democracy, or some such utter bullshit. Biden is now dismantling the roadblocks the Trump administration set up against Putin and Russia and their gas pipeline, which Trump did for solid, sound, principled reasons, having nothing to do with phony environmental virtue-signaling, and which helped prove he was anything but an asset to Russia or a friend to Putin.

It’s rich. But smart people will learn something from it all, become honest, they leave the cult, and they grow up.