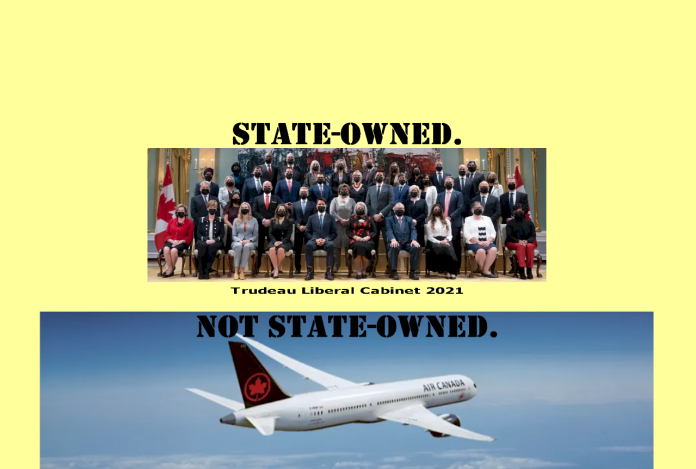 A government inserting itself into the affairs of a private company like Air Canada to in any way dictate or pressure their compliance with a political party ideology or shibboleth (must, must, must be bilingual or the world will end!) used to be considered a terrible idea — one that the media would question the hell out of, and opinion columnists like those at the Globe and Mail or the Toronto Star would race each other to denounce it as “Trumpian” — and claim democracy and life as we knew it in Canada was at risk of dying and on the brink of collapse.  But that was in the old days. Or maybe this occurs only when conservatives or non-progressives are in power. I don’t know. I can neither predict nor explain how those who lack principles will behave.

“Both his decision to deliver a speech essentially entirely in English and his subsequent comments about his use of the French language are utterly inconsistent with the company’s commitment to both official languages that has been in place for decades – from the very first days of Air Canada’s privatization… They are also, I believe, inconsistent with the expectations that many Canadians – the clients of Air Canada – have for their national airline.”

First, “national airline?” That’s “state-owned” talk. She even alludes to “Air Canada’s privatization.” What part of this does she not get? Although it may give her the sadz, state-owned, Air Canada ain’t.

As a shareholder of just 6% of the shares — which the government owns only as a result of the Canadian government “bailout” of that private company earlier this year… which was due to that same government’s own braindead and uber authoritarian shutdown of the entire economy because of the Wuhan virus… which was hammering Canada due to the Trudeau government keeping the borders open on account of it being “racist” to ever dare shut them (until they did, sort of but not really, which was then described by them as “following the science you idiots”)… which was all on account of the Chinese communists somehow or other creating an infectious disease, covering it up, and carelessly allowing its export around the world and causing a pandemic and killing countless millions — Chrystia Freeland seems to think she runs the joint. Like a Soviet or Chinese government official might more rightly think.

She does not. Plus she is “the government.” And AC is private. Which makes it dangerous territory in which to tread — I mean if you value freedom and democracy, and the free market. And understand the concept of government overreach.

Second, I have a counterargument, if I may, as an even smaller shareholder of Air Canada through my various exchange-traded funds: While flying through the air in a thin metal tube at 500 miles per hour, Canadians don’t give a (pun alert!) flying fig if the Air Canada CEO speaks French. As a matter of fact, I’d rather not have to listen to every cabin crew announcement in English and then again in French. That’s the extent of my thoughts on Air Canada and French. No letter forthcoming.

Of course, the cabinet minister — who actually thought about this before doing it, which is scary — also thought very carefully and decided to write the very public open letter regarding the ever-so evil English-speaking CEO in French only, not even trying to conceal the obvious snub in so doing, nor the obviously glib and smug nah, nah, nah-nah, nah contained therein. It’s what a snotty and uber privileged little 12-year-old bully girl might do with her chums after school from the safety of one of their princessly bedrooms in their parent’s gated community home. It’s embarrassing. 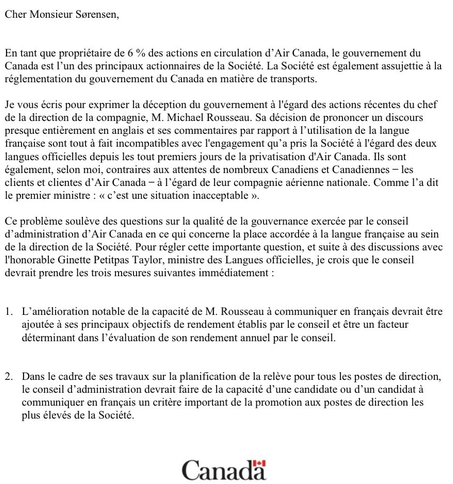 Today the news media reaction to this uncalled-for political meddling is “meh.” While the main opinion piece in the Liberals’ Globe and Mail division contradicts Freeland and mocks the idea that the CEO needs to speak French, it is headlined, “Sure, it would be better if Air Canada’s CEO spoke French, but it’s not essential.” Wow. Biting. And missing the point about “democracy dying” and that whole “Trumpism”  thing entirely. Mind you they’re of course missing that point on purpose. (They do have some principles!)

Air Canada is a private, shareholder-owned, publicly-trading TSX business. Unlike other Canadian private businesses, it does have some archaic government dictates (dictates being the operative word) attached to its existence (exactly like so many Chinese communist state “businesses”), harking back to its sad, sad days as an awful state-owned and state-run “business” or “crown corporation” (when, alas, it was rightly called “our national airline”). During this time it failed 800 times before being bailed out 950 times, and then it was finally released into the free market where it has generally flourished, save for the state shutdown intervention causing its latest existential grief. (Lesson: unlearned!)

These odd and rather inexplicable state dictates include a mandate that AC keeps its headquarters in Montreal, for some reason having nothing to do with Quebec votes and the Liberal Party. Those state dictates do not include its CEO being a French speaker. This is merely Freeland glomming on, and let’s face it, she’s doing so only to appease the Quebec voter set. Her party’s voters. It’s pure, crass, politics. Political meddling.

She might just as well have sent him a sternly-worded email denouncing him for being a man. “You should be a woman! That’s what’s trendy and cool, yo! A woman of color!”. And just as much logic and reason and propriety would follow her on that trail. Meaning none.

And what would the Globe and Mail write then? Probably “meh.”

Freeland does seem to understand is the “news” media, and rightly so, having once been the deputy editor of the… the Globe and Mail. Ohhh! And whaddayaknow, the G&M is a private company, although it, too, now automatically gets millions of dollars in state bailout “supports” every year thanks to her and her boss. The Globe and Mail is our “national newspaper!” Now if only Freeland would write to the CBC and get them to stop operating like it was called AOC.

In any case, Freeland’s job and her copious compensation package should be gauged by her willingness to not threaten our free-market economy and our democracy, nor be a childish imp.

P.S. Back in April when the government bailed out Air Canada because of their economic shutdown, and they assumed a 6% shareholder grab, I mocked them and Air Canada for bringing AC to that point and warning, with deep foreboding, of the terrible precedent it sets for government authority, control, ownership of the entire economy. I used the very same AC jet photo I’m using today for the feature photo, but at that time, with the caption “state-owned.” That was hyperbole, in case you’re stupid. But it was also a little prescient.

Previous articleMaybe we should cap car-building to 46 cars per year
Next articleCanadian refugees from Communist China being terrorized. In Canada. But ma French!