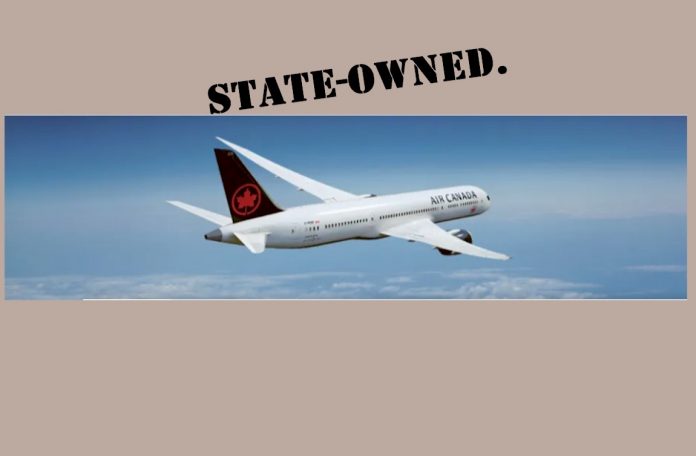 My last post (before I started painting my house — a work in progress) included the line “We’re on our way.” It was a line penned by Jonah Goldberg, after writing that socialism is all-too-easily adopted, and takes over at the blink of an eye. It’s nearly impossible to come back.

I mention it because today the Globe and Mail reports, with nary a critical eye, that the government is set to take an ownership position in Air Canada —another business they wrecked because of the Wuhan Virus which they allowed into our country, and continue to.

“Ottawa is buying $500-million of Air Canada stock, or 21.6 million shares, at just over $23 each and has the right to buy 14 million more,” the Globe reports without once raising the question of the propriety of government taking over businesses in what is supposed to be a free, democratic country.

They go on: “Canada’s other carriers will line up for financing on similar terms, predicted John Gradek, a business professor at McGill University who worked in the airline industry. He said: “Everyone will be at the trough.””

The Liberals and the even further left-wing parties (and in the U.S., the Democrats) have not been shy to acknowledge that they are leveraging the pandemic and the economic calamity cause by it (though they do studiously fail to acknowledge that it was government at the root cause of it all) to move their ideological program forward. Never let a crisis go to waste. This is the good part about the pandemic and all those idiots dying! Forward, in this case, once again means to move solidly leftward. Not toward more freedom and less government intervention, but away from it. Not to free more people and businesses away from reliance on the state, but to increase that number and their reliance. Not to reduce government meddling in business and in our private lives, but to ramp it up even more. And this Air Canada state-ownership move is but the latest example of what will be many more to come.

Here’s a reprint of the exact section of my post including the words “We’re on our way.”

This is from about half way down…

… If you were that alien watching the growth of government, you’d see the line go up and down here or there. But if you zoomed out then you’d never see it retreat completely to pre-spike levels. It’s a step ladder, a series of plateaus, and then the ascent resumes. In the moment it can be hard to see, what with our incredibly stupid arguments about how a cut in the rate of growth is an actual cut. But again, if you step back, you can see how far down this road we’ve come. “[T]he United States in the 1920s,” writes William Leuchtenburg, “had almost no institutional structure to which Europeans would accord the term ‘the State.’ Beyond the post office, most people had very little interaction with or dependence on ‘the government in Washington.’” That seems like another world, because it is.

Similarly, his conception of “infrastructure” is very New Deal-y. “So many people said, ‘Oh, the $400 billion that are being proposed for the home care workers or the home care sector, that’s not really infrastructure,’” White House economist Cecelia Rouse argues. “Well, I beg to differ. I can’t go to work, if I don’t have someone who’s taking care of my parents or my children.”

I can’t go to work without pants either, that doesn’t mean the government should launch a pants-buying program.

I have problems with a lot of the people on both sides of the aisle who throw around the term “socialism” without knowing what socialism is—and isn’t. But at some point, if everything is “infrastructure”—which Biden basically defines as anything that makes your life easier—than we’re going to stumble into precisely that. It may still be “democratic,” but the range of stuff you’ll be allowed to vote for will be quite Deweyan. That was Arthur Schlesinger Jr.’s hope. In 1947, he wrote in Partisan Review, “There seems no inherent obstacle to the gradual advance of socialism in the United States through a series of New Deals.” All it would take is the empowerment of the “politician-manager-intellectual type—the New Dealer,” to make it happen.

Previous article“We’re on our way.” And it’s not to a good place.
Next articleCanada is being walked blindly down the garden path