Maybe we should cap car-building to 46 cars per year 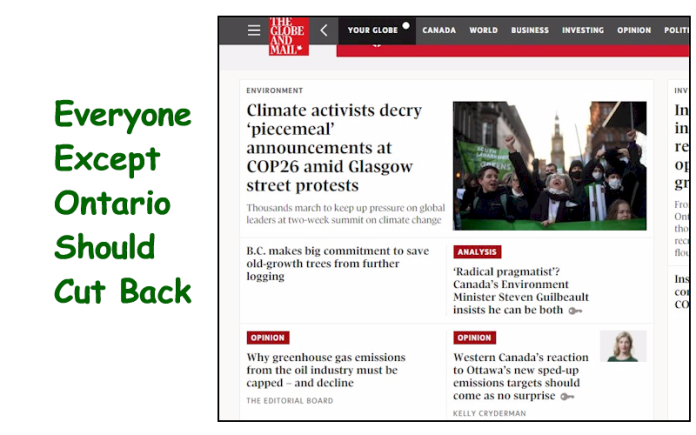 The Globe and Mail is ALL about the “man-made global warming.” They can’t stop promoting various iterations of Green New Deals. Editorials advocating for oil and gas cutbacks of every conceivable kind — are replete in every edition. They love this crap. Which is to say they hate Alberta oil (no word on Saudi, Russian, or Venezuela oil) and they will stop at nothing to talk it down.

Now, it doesn’t stop them from running a huge (I mean ha-yuge) car section called “DRIVE” in their paper, or accepting car ads, naturally.

And it doesn’t inspire them to advocate for the elimination of the Ontario car industry — cars being the number one culprit in the mind of the greenie. Or even advocate for a “cap” (they loves them some “caps” when it comes to Alberta oil emissions, etc)… on car production. Look at their lead editorial today (although it’s roughly the same as most days):

I’m suggesting they advocate for a 46 car per year “cap” on car production in Ontario, which is where they make cars in Canada, which isn’t Alberta or BC. Where did I get “46?” I pulled it out of my ass, which, if I understand correctly, is how they do it. And that all auto plants be 100% solar-powered. Or wind-powered. Certainly “net zero”… by the year 2022. Anything less would render them hypocrites and utterly disingenuous. Performance artists. Virtue-signallers the likes of which make even the street performer Justin Trudeau a rank amateur. Fakes. Bullshitters.

Previous articleSupply Chain Bottlenecks in California blamed on Democratic rules and regs
Next articleAir Canada is a private company. Trudeau cabinet is not.