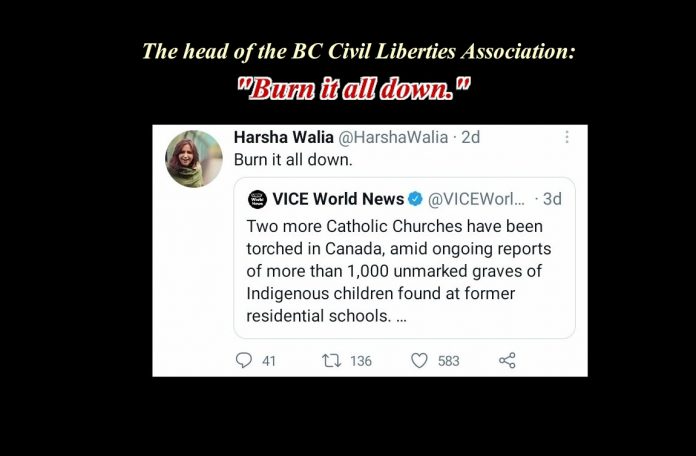 A poll in America on the occasion of Independence Day — the fourth of July — revealed that Americans are, in fact, proud of their country, despite what the media would have you believe (what with all the “systemic racism” and whatnots). I might rephrase that a bit: despite how the media would have it if only they could more fully convince Americans that America is bad.

IssuesAndInsights.com did the poll, and it’s reported in the Wall Street Journal. 68% of adults say they are “very” or “extremely” proud to be an American, with another 15% “moderately” proud.

So who isn’t proud? The young ‘uns. People age 18 to 24. Only 36% of them are proud. Which is insanely bad. What springs to my mind is that these are people in school, or just out of school. And to my way of thinking, humans aren’t born as haters, hating the very place they live. They’ve been taught to hate America. By teachers. Public school teachers. This is doubly insane. Like existentially calamitous.

But it’s a trickle-down phenomenon. In another story I read this morning, several Democratic elites — well, elite a-holes anyway — took the opportunity to bash America, on this same historic occasion, for some clearly rather sick reason. It’s just as you and I and those of us in the sensible set would expect by now, but still, every time I see it, I shake my head and wonder — sometimes aloud — what the F is wrong with these idiots? — and I mean I seriously question their mental capacities. They, too, hate America, but what’s more disgraceful is that they want you to, as well. Which is really just rather pathological, if you ask me.

Here’s Democrat Maxine Waters — one of the biggest a-holes (and although the irony flies like an F-22 right over her empty head) also one of the most powerful people in North America, black or white, spewing brain poo all over Twitter:

Aside from sounding like a fool, she sounds like a petulant child. Infantile. Moreover, she sounds hateful. Lacking perspective. Lacking an education (or perhaps too much education?). And resentful. Not somebody who should be in government representing, you know, America. Or any people.

This phenomenon is not completely alien to Canadians. Those on the left in both countries — and the further left you reach, the more pronounced this seems to be — aren’t happy with Canada the way it is either, nor, naturally, the way it was established (“colonized,” “settled,” or, if they can get away with the more radical language — say they’re on the state-owned CBC for example —”stolen“). Nor are they pleased with the way it progressed through the years, what with all that capitalism and free, not-government-controlled markets, freedom of speech, and other such uncontrolled western cultural values like yucky whole families being in charge of their own lives and destinies, and random people presuming to take personal responsibility, and such, making us among the richest and fairest and most tolerant nations in the history of the world. No, they really do hate all that as you can see from the likes of Maxine Waters’ tweet on the occasion of July 4th.

They seek to take it down, to “tear it down,” “burn it down,” to one extent or another, and “rebuild” it. You’ve heard them: “Build it back better”, to quote their sock-enlighted leader’s vernacular in Canada when he’s not praising China’s “basic dictatorship.” A more accurate explanation — and I’m borrowing some of the words they use themselves — is: to tear it down because, despite their efforts, they cannot convince you to agree with their radical-left ideology, then build it back more to their political-ideological liking (read: far left-wing, or, “better”). 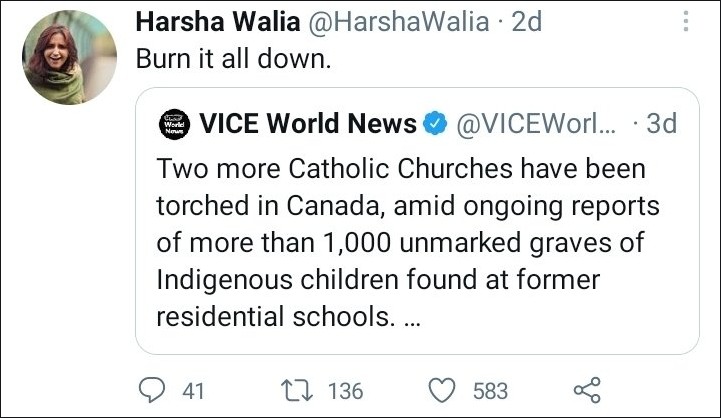 She sounds to me like a dangerous radical extremist, who is literally inciting violence in order to terrorize Canadians and purge or cleanse Canada of a certain Canadian group in order to banish that group, remove their civil liberties, and, I’m guessing, “build back better.” But don’t worry, Twitter let her keep that violent, inciteful tweet up, and Canada’s news media — or at least those who bothered to write the story up — ran to her defense by mostly rambling on and on not about that woman and her radical tweet, nor her very interesting past, but rather, they wrote about all those who came to her defense (all of them ardent left-wing loons), like that was the news. You can’t even find the story about this travesty at the state-owned CBC. Or at liberalvision CTV. Or most anywhere else. And of course, that’s journalistic malpractice on its face. And no, no left-wing politicians condemned her (save for one, when directly asked). Trudeau? Nothing. No “terrorism” here, folks! She has kept her job as head of the B.C. Civil Liberties Ass. too, of course. Seriously.

Which means they support her. Agree with her.

I could go on, and since I can because I, rather than the state, own this platform, I will. In his Twitter profile, this radical leftist arson supporter boasts of his former membership in the Ontario Secondary School Teachers’ Federation, and also boasts of having taught your children. He added this delightful information to the conversation: 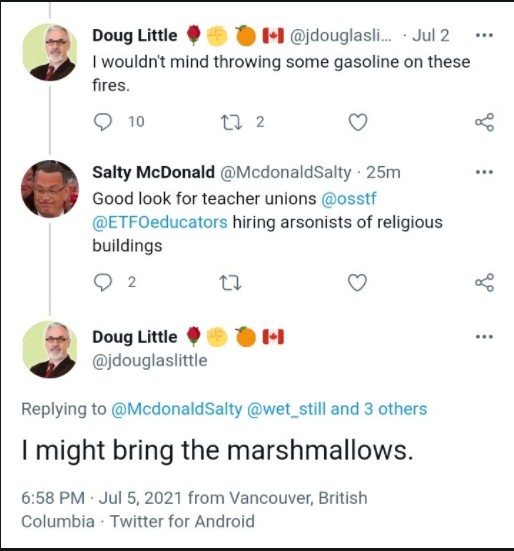 I think he deleted that one because I can’t find it anymore. Maybe he burned it by accident with some of that gasoline has so adores for arson purposes when he isn’t busy protesting its drilling in Alberta or its use in your car but not his.

I could easily go on like this all day, every day, with more examples.

When they’re not burning things, in Canada, the young ‘uns are literally tearing down Canada’s status, which means trying to tear down its history of course. And they are goaded on or even praised at times by those in power as we have seen here. They all seek to shame us and blame us and point out that we’re bad and cannot be redeemed. For just that nefarious purpose. To “build back better.” So another example: this one-word tweet response (“Good”), below, which that same ass, Doug Little, tweeted so proudly on CANADA DAY, July 1st, and which remains there on his Twitter feed, ever so proud-Canadian-like, doing the job he seems to thinks is his: educating our children to hate their country (which Twitter also seems to enjoy, since they left it up and didn’t ban this creep): 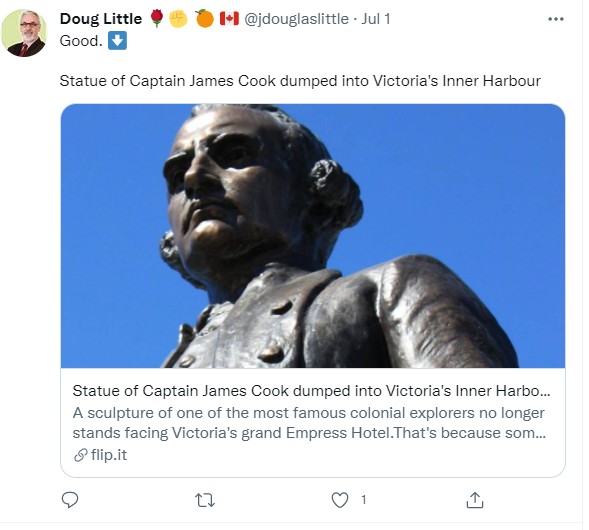 Here’s more from the poll:

Progressive waves of progressive teaching and governing. That’s what I see. And we should tear that demon down right now.