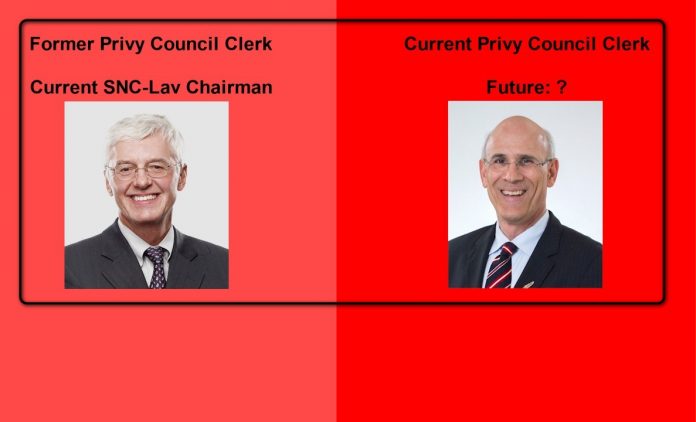 SNC-Lavalin hired the former Clerk of Privy Council as their Chairman, who then lobbied the current Clerk Michael Wernick to get them out of criminal prosecution? Really?

The current clerk’s testimony this past week included this gem: “My recollection of the conversation is that he asked, ‘Isn’t there anything that can be done?’ ”

Surely this lobbying, which reeks of cronyism, should have been recorded with extemporaneous notes rather than mere “recollections.” Surely it will at least be duly registered in the public record.

Robert Fife (et al) at the Globe and Mail detailed this a couple days ago, and again this morning (my bolding):

SNC-Lavalin CEO pushed for meeting with Trudeau over prosecution

The Oct. 15 letter from Mr. Bruce  [CEO] to Mr. Trudeau is dated the same day that Michael Wernick, the Clerk of the Privy Council, the bureaucratic agency that serves the government, talked by phone with SNC-Lavalin chair Kevin Lynch, who was clerk of the privy council

… The phone conversation between Mr. Wernick and Mr. Lynch was not in the federal lobbyists’ registry. The Office of the Commissioner of Lobbying said on Thursday it is “currently assessing the information put forward by Mr. Wernick.” …

That’s quite a wrinkle. Mr. Lynch is a former Clerk of the Privy Council, and SNC-Lavalin’s current CEO. Mr. Wernick is the current Clerk. You’d think these people would know the rules. And care so deeply about them that they’d never break them. Seems hard to believe they’d break them by accident. Then again it seems hard to believe they would even engage in such a conversation given how it might look to the lowly Canadian proletariat, who I’m pretty sure can’t pick up the phone and plead their case with either the Clerk of the Privy Council or the Prime Minister.

According to a document found at the 29-million-page government of Canada website:

What are the consequences for failing to register my lobbying undertakings?

There are consequences for not complying with the provisions of the Lobbying Act and the Lobbyists’ Code of Conduct. The Act provides for penalties for lobbyists who are found guilty of failing to register or making false or misleading statements in any return or document submitted to the Commissioner and are liable:

The Commissioner may also impose a prohibition on lobbying for up to two years on anyone convicted under the Act.

If an individual breaches a principle or a rule of the Code, the Commissioner will make this public in a Report on Investigation tabled in both Houses of Parliament.

Remember, the news report indicated “The phone conversation between Mr. Wernick and Mr. Lynch was not in the federal lobbyists’ registry.”  What about this then?

17. Which public office holders should be included in a monthly communication report?

So you’d think the media would be asking about this since it seems more serious charges are possible. Of course Mr. Trudeau might find it expedient for his political career — his job — to intervene in any new charges, since that seems to be his thing. As he said, he is concerned about jobs. And maybe they all agree this one additional little thing should also get a pass, another DPA, since by golly “9,000 jobs are at stake.”

And the media might find it expedient to bury this story and help him and them get elected. It’s possible. There’s lots of lobbying going on, and we apparently have no clue who’s lobbying whom.