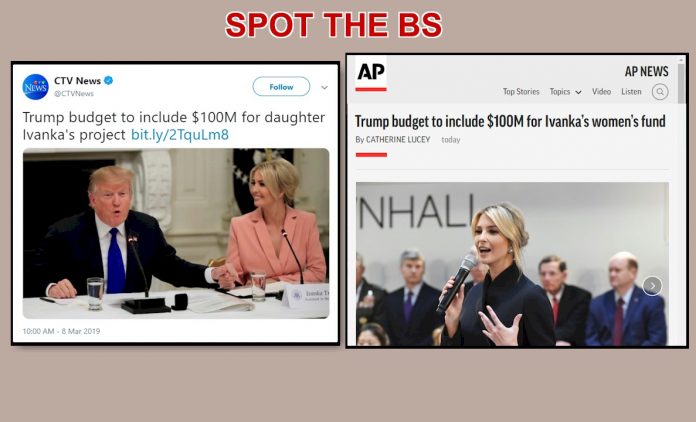 It makes all the media look stupid.
What a cynical — and totally misleading, on purpose — bit of reporting today by the liberals’ CTV division, on U.S. politics. Today they’ve been reporting on every single solitary “woman’s issue” thing today in celebration of International Women’s Day, but damn that Trump. He went and came out with a major boost for women, and they can’t allow that. They must smear him. They must lie to make him look bad. This is what “journalism” has come to.

They BS this story as “Trump budget to include $100M for daughter Ivanka’s project.” As if to say it’s a scam, a cute little hobby of his daughter’s for which he’s committing taxpayer dollars. Because, you know, Trump.

The actual article, if you bother to go to it, reveals the lie right at the open. But who cares, they think, you idiots probably only read the tweet and the headline and that bought them the Trump smear they were after.

Trump budget to include $100M for daughter Ivanka’s project

The White House said the budget, expected to be released Monday, will include the funding for the Women’s Global Development and Prosperity Initiative. The administration last month launched the government-wide project, which she leads.

In a statement to The Associated Press, Ivanka Trump noted that Friday was International Women’s Day and stressed the initiative was “working towards our goal of economically empowering 50 million women in developing countries by 2025.” She says the budget includes “a new $100 million commitment” for the fund.

… Since Ivanka Trump joined her father’s administration in early 2017, she has focused on women’s economic issues.

Just to show what total BS the CTV is, it’s an Associated Press story, and at the AP site itself, the story is headlined, “Trump budget to include $100M for Ivanka’s women’s fund – AP News.” Get that? Ivanka’s WOMEN’S fund. Not “Ivanka’s project” (intended to be read as having nothing whatever to do with women and a big negative). 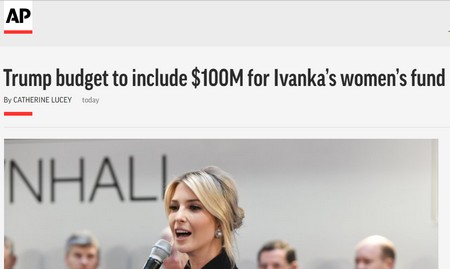 Even the further leftist Toronto Star went with the original “Trump budget to include $100M for Ivanka’s women’s fund.” As did ABC News.

Fake news is one thing. This is misleading readers and viewers. This is changing the news. This is total BS.

Previous articleWhat I said.
Next articleWho Lobbies Whom?