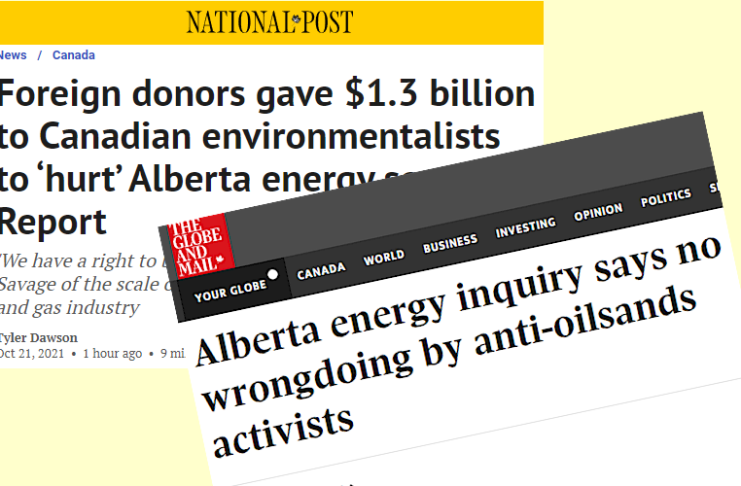 While the Globe and Mail seems to forget even their pretense of objectivity and goes right ahead and claims VICTORY! for the anti-Alberta, anti-oil crusaders as a result of the Alberta report released today:

…the National Post posts a more pertinent review of the news:

“Foreign donors gave $1.3 billion to Canadian environmentalists to ‘hurt’ Alberta energy sector: Report
— ‘We have a right to be outraged,’ said Energy Minister Sonya Savage of the scale of foreign funds aimed at damaging the oil and gas industry“

The G&M is playing obfuscation as it tries to revise history somewhat, and makes out like the goal of the report was solely to determine whether there was any malfeasance or illegality in all that foreign funding. No? Well, then that’s the point! (If there was criminal activity, they’d try yet another angle, possibly invoking TRUMP! in desperation).

Actually, if you follow the science, the report was inspired by the fact-finding of intrepid researcher Vivian Krause, and others, who documented foreign meddling in one of our nation’s key industries. And in fact (fact, I stress, as is now clear by the report) there was indeed — contrary to the denials by the likes of the G&M and no end of haters on Twitter — a huge amount of foreign influence, and their dollars, at work.

And the report makes clear that the lack of transparency deployed by these foreign actors and their Canadian recipients (on purpose, in my opinion) made it hard to even clarify how much money went where for what. The G&M acknowledges this: “In the final report, he writes: ‘I was ultimately not able to trace with precision the quantum of foreign funding applied to anti-Alberta energy campaigns.'”  That’s a scandal in and of itself, to my way of thinking. These are “charities!”

It amounts to $1.3 BILLION of foreign funding, but the G&M seems to have converted that figure to USD (well why not, since that is the foreign currency in question!) —possibly to enable them to report it was only “…$925-million in foreign funding reported by Canadian charities…”. Hillarious. The CBC went with $1.28 billion, since they are, you know, Canadian.

And again, the G&M’s whole spin on it is that it’s all about whether there was any criminal activity in all of that — which is just diversionary tactics at play, and which is a horrible way to do journalism and deliver the news.

Also, what happened to all their outrage about foreign influence in our affairs? RUSSIANS! (and all that). If the NRA so much as says the words “gun rights” and “Canada” in the same sentence the Globe and Mail throws a massive fit and six of their columnists demand in sternly written essays that those damn ugly American foreigners stay out and mind their own business. But when it’s anti-Alberta and anti-oil, and American dollars fighting that, it’s all cool.

Load more
Previous articleWe should ignore someone here
Next article“Tax the rich?” “Raise corporate taxes?” How about taxing fake charities?