What we got here are nefarious ties to untruthiness, Tom 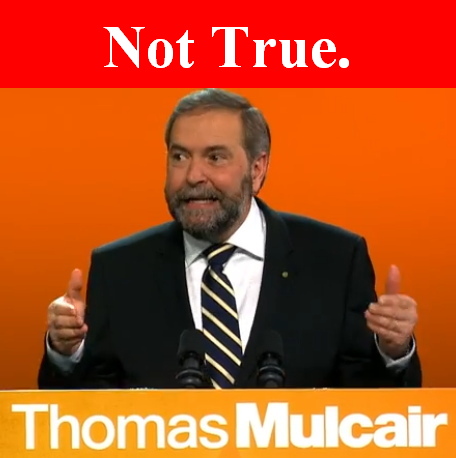 Politicians like the socialist NDP’s leader Tom Mulcair make the pedantic and excruciatingly boring claim that they need to be elected because they’re so, so honest, and the guy who’s in power now is so corrupt. Join me in a mass yawn. And so it’s weird to keep finding such blatant dishonesty in their ridiculous daily (or more) NDP mail-outs, in which they plead for money… presumably so that they can get scads of money and a “huge campaign war chest,” so they can buy their way to victory.

So Stephen Harper’s war chest is “courtesy of his friends with ties to big oil and other corporate interests”?  That’s not true. And by the way, what’s wrong with people in the oil business? Are they bad Canadians? Do the NDP hate them? Are the NDP conducting a war against oil, and a war against the good Canadians who work in the oil industry? Do they hate some Canadians, like those “corporate interests?” Are the NDP at war with business?  What the hell is the matter with these people, who are always dividing people in Canada and trying to set one sector off against another?

The fact is, the Conservatives have gotten to be the biggest fund-raisers by far, by appealing to the average guy. It’s also how they got elected. Time and again.  They get most of their cash from smaller donors  —   many more than any other party  —  and four times as many as the NDP. Like 100,000 people, per year. Those are Harper’s evil “friends.” This fact is readily available for the checking. The numbers are public, so you can go look yourself.

And this is to say nothing of the fact that corporations are in fact banned from donating to political parties, despite the insinuation by the NDP in their deceptive smear-mail. Corporations have been banned for donating to political parties in Canada since 2004, not that there isn’t organized corporate support anyway. But it’s the Liberals who have been, at least in modern Canadian and U.S. history, the bigger beneficiaries of that corporate support. Not the right.

But at least we know those massive labor unions don’t support the NDP, right? Well that’s a joke of course. The Liberals get most of the corporate support, and the NDP get all the union support, and not just in cash  —  in numerous other ways too. It’s the Conservatives who are up against it, and still come out ahead anyway.

One last fib: “…it’s the well-connected that really win”. Are they implying that those horrible people who they want you to join them in hating  —  “friends with ties to big oil and other corporate interests”  —  give the Conservatives campaign money, and then massive government corruption ensues, like in some socialist countries, Putin’s Russia, or like in Canada’s Liberal Party Sponsorship Scandal? That’s quite a charge of corruption, and it’s one that they obviously can’t make honestly, so they churlishly make it dishonestly. And in so doing, they knowingly smear Conservatives, including all of those 100,000-plus good Canadians who have contributed to that party.

Previous article
When government deems a park as sacred and organizes a “pilgrimage?” Tweet Poo!
Next article
Activism disguised as journalism: the CBC