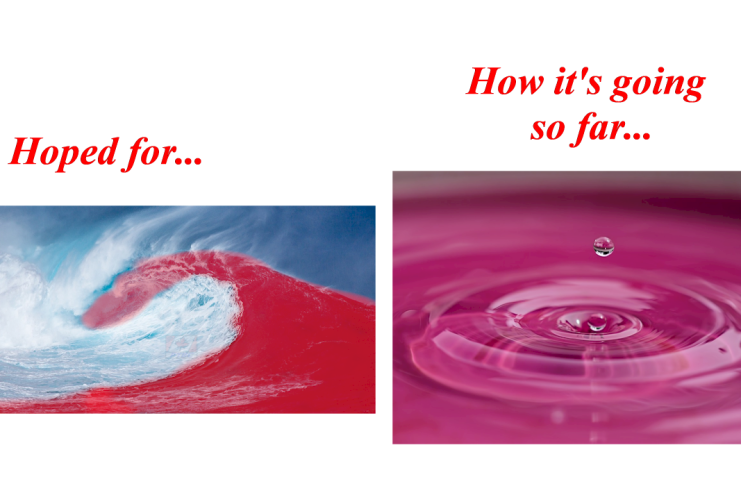 Even Dems (and the Dem-adjacent “news” media) were getting ready for a red wave, by, for example, warning in advance that the election — in which “deniers” from the Republican party were running — was to be rigged. They did this by, um, denying, in advance, that the results would be on the up and up… MAYBE.

Claiming election malfeasance in advance is a great way to provide cover for your losses.  Like the Dem’s Politico division did yesterday both on Twitter and in a special pre-denial report. Look! 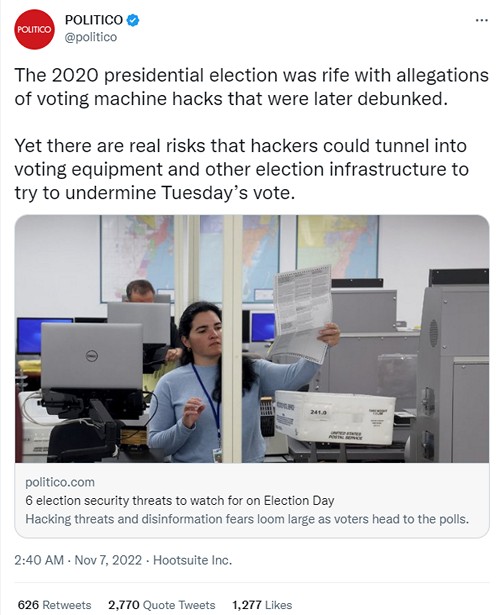 Nice job here because they first “debunk” those previous *Republican* complaints, about whom they spent pints of ink casting as evil “deniers” during this election cycle (as per the agreed-upon left-wing narrative — shared even by lowly Canadian media which cheerfully and dutifully joined in), then they go right ahead and presume to declare that this time, without really knowing anything about them in advance, the rigging is fer realzies... MAYBE, JUST IN CASE. They do not call themselves deniers in advance, but that’s what they are. Fakes. Phonies. Liars. Dishonest brokers. Not-to-be-trusted. Particularly the Canadian media which knows less than nothing about these things and chooses to simply buy into whatever the Official U.S. Left-Wing Narrative is, once again, on issues that have zero to do with Canada. Truly embarrassing. 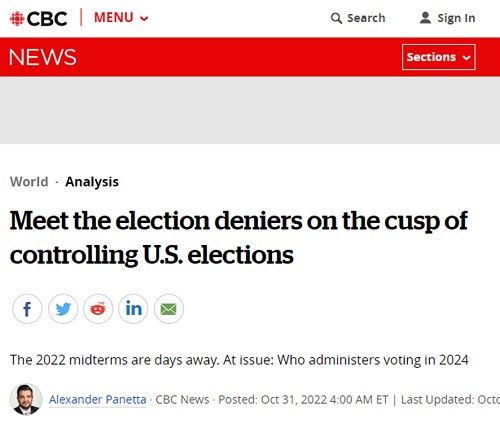 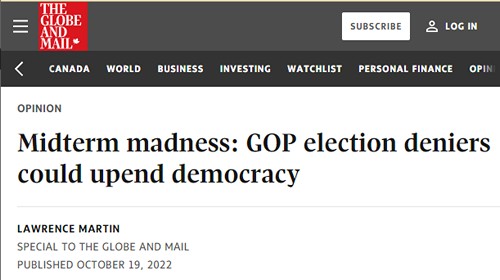 The Democrats’ New York Times division and others of that ilk did the exact same. Fox News has an article about it here, but I saw it all over the place — again both in the U.S. and in Canada. It was at once hilariously hypocritical and deceitful, and, in truth, democracy-ruining, and just sad.

Let me be clear: there were election 2020 deniers running. Like Stacy Abrams (D — whom they studiously avoid mentioning, just as they do Hillary Clinton, 2016 denier still, and other Ds) and Kari Lake (R) in Arizona and many others in the GOP. I’m not in denial and I’m not denying there were deniers (we have fun). And I think most or even all of them are or were poor candidates. I was of the sort of Iran-Iraq War mindset in which I didn’t care who lost their races. But the “denier” card and its DEMOCRACY IS IN [email protected]+#! card was overplayed x 100 by the Dems and the Dem-adjacent media.

It turns out the left-wing media machine didn’t need to deploy the fake election denial they were intent on deploying (IF NECESSARY! JUST IN CASE!), because the red wave didn’t materialize, and it turned out to be only a pink ripple, and barely one at that.

If, by chance, the GOP candidates who lost last night start now to blame their losses on election rigging or malfeasance — or, say, the Trump machine reverts to its ugly form, again — then these same left-wing “news” media will cat-call until (mixed metaphor alert) the cows come home about how the right is replete with these weird “deniers” —while they on the Left are of course ever-so “honest and objective.”

It is to barf.