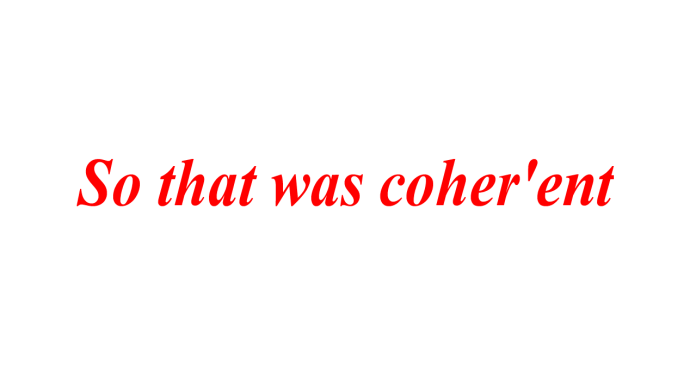 On the lighter side of life…

Are ya like me? Do you get bothered by tweets, signs, newspaper articles, and online posts — especially those written by professional businesses staffed by editors — with spelling or punctuation errors? For me, it’s the surprise as much as the annoyance. Mostly it’s the delicious juicy chance for me to appear holier-than-thou once again.

So if I understand the National Post correctly, Tylenol shortage shows ‘feminist’ Trudeau let us women’s issues fester? I’m sure Danielle Kubes has nothing to do with this error, today, but let’s look past it for now because the article is quite good.

I see grammatical errors all the time in the tweets of people I follow, some of whom are people I like and really really agree with and who make great points… but then sully them with horrible punctuation, spelling, capitalization, or other such errors you’d expect from dumb-dumbs or illiterate six-year-olds or people who went to state-run public schools or something.

I’m not talking about typos. Everybody makes those. Even me. Seriously. I’ve made at least one in the past twenty-five yeers.

The most common error is the use of an apostrophe before every S — even when it’s not required — as if it’s meant as a warning…. here comes an S! People throw an apostrophe in there no matter the circumstance. The lottery ticket give’s you two play’s. I want these people to be punished. Musk should make it a requirement that people who get blue checks lose them if they do this. That’ll learn ’em.

And since it’s Remembrance Day tomorrow or what they call Veterans Day in the US, it is VETERANS without an apostrophe. The day doesn’t belong to veterans but is instead a day to honor all veterans. The Tuscaloosa, Alabama tourism board (or whatever) may still get my business because I’d love to visit (especially since you apparently have an all-girl army), but they gone done it wrong here, y’all. And to the dumb dumbs: yes veterans is plural and yet amazingly it still does not require an apostrophe before the S at the end. God! 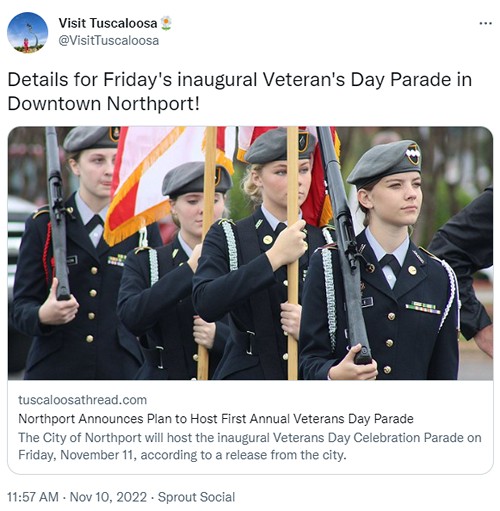 Some stuff is almost impossible to figure out. Like Seniors’ complex. Or is it Seniors complex? (my Grammarly app tried to autofix it as Seniors’, in case that helps.) The state-owned CBC says the latter, which looks wrong to me (their lack of an apostrophe, as well as the state-owned CBC itself looking, feeling, sounding, and smelling wrong to me, yes).

According to The Grammar Logs — Number Three Hundred, Ninety-Four (guidetogrammar.org), it depends if you’re looking at it as a possessive (which would be written as seniors’) or as an attributive (which would require an apostrophe). The BC government doesn’t have a clue.

I guess I should be glad the BC NDP huge all government all the time for all humanity whether you want it or need it or not is not launching a Royal Inquiry into it or starting a new ministry for “apostrophe justice.”

Then there’s this more obvious and blatant brand of crap: 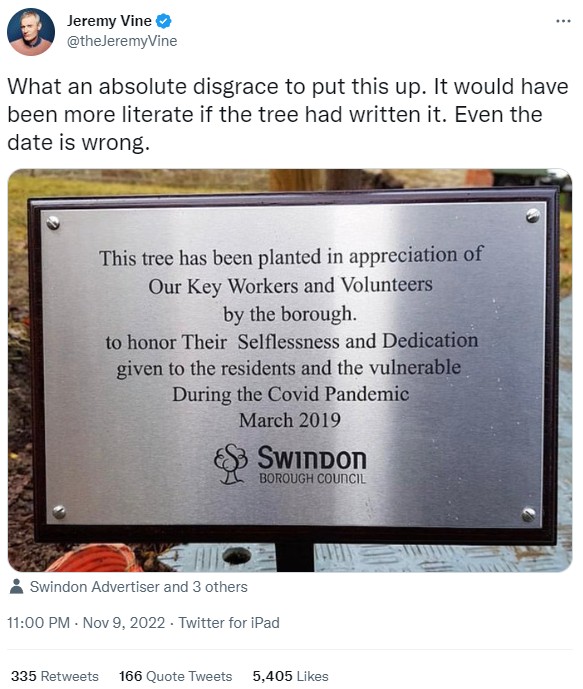 The inexplicable mixture of capitalized and non-capitalized words, the letter and word spacing, the general incoherence, the wrong date (March 2019 being prior to covid even coming out of China after being created probably in a lab in Wuhan China ahem), the fact that it was placed in this manner by a local government who ordered it, got it printed or engraved this way, approved it, then placed it here — all without anybody saying anything that would spark a do-over— this one’s got it all.

Here’s a journalist — OK, a talk radio host — who is illiterate or in too much of a hurry to bother making any sense; or perhaps he thinks making sense is just so yesterday, as apparently much of the Twitterverse does: 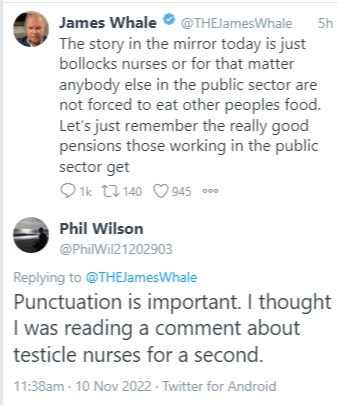 He’s quite consistently bad in this regard, no bollocks.

Every time I write about this stuff I’m accused of being “uppity” and “a snob,” et al. I don’t give a s’hit. This stuff matter’s.

P.S. Don’t start your vocal sentences with the word so. Chrystia Freeland. It is so irritating. Don’t say “awesome” unless it is actually, relatively, awesome (and no pizza makes the cut). Don’t uptalk (making every sentence end in what sounds like a question?). In other words, be like me and you’ll be fine.

Previous article
Wave reduced to ripple
Next article
This, and that.