The truckers protest could have been handled without abusing the law. 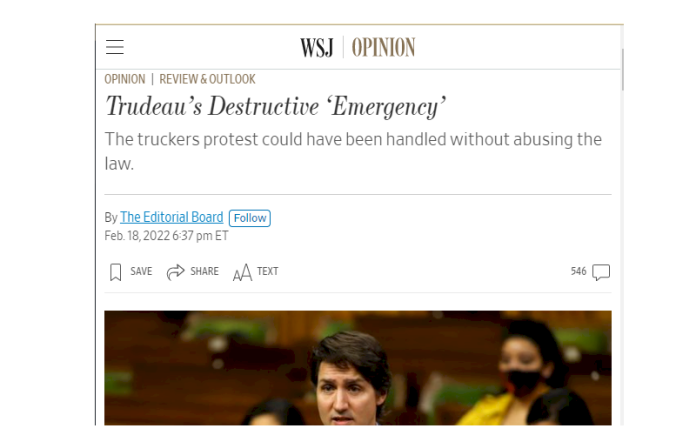 I made a seven-part Twitter thread this morning, built out of selected quotes from a Wall Street Journal editorial (that’s a free link), and I don’t have much to add, so I’ll just post the quotes I tweeted here.

Canada has failed on both scores. For weeks authorities tried to wish away the problem. When that failed, Mr. Trudeau overreached…

Mr. Trudeau justifies the “public-order emergency” by inflating the protest into a terrorist plot to overthrow government. The Canadian Civil Liberties Association disagrees and sued Thursday.

Trudeau criminalized a protest movement, deputizing financial institutions, without due process or liability, to find and freeze personal accounts of blockaders and anyone who helps them. These extraordinary measures are a needless abuse of power.

Weak responses to civil disobedience have hurt Canada for years. New gas pipelines are increasingly stymied by blockades, often by green or aboriginal activists. On Thursday men wielding axes attacked a pipeline drill site and its workers in British Columbia. That’s worse than anything the truckers have done.

In early 2020 Mr. Trudeau urged dialogue with pipeline blockaders. Facing Black Lives Matter protests in violation of Covid rules in June 2020, Mr. Trudeau joined in. But with the truckers, the Prime Minister refused to meet or compromise.

In abusing these powers for a nonemergency, Mr. Trudeau crossed a democratic line. Canadians wanted the blockades to end, but it never should have come at the expense of the rule of law.

I would encourage you to read it at the WSJ online. I’ve stolen much of it here, but it’s best to get the whole context of course. As I’ve said in the past, the WSJ is the very best value in real news, so if you’re trying to limit your monthly subscriptions to news sources, this is a solid buy. Unlike reading or watching the state-owned CBC, liberalvision CTV, Trudeau’s Globe and Mail or Global “News” divisions, or the rest of the liberal left’s increasingly woke progressive propaganda feeds — in fact completely opposite to those horribly unobjective “news” outlets — the WSJ makes you smarter every minute you spend there.

Previous articleForget the loss of trust in institutions. I’ve lost trust in my country.
Next articleActual Liberal Party MP – in Parliament: “*Honk Honk* is secret code for *Heil Hitler*”