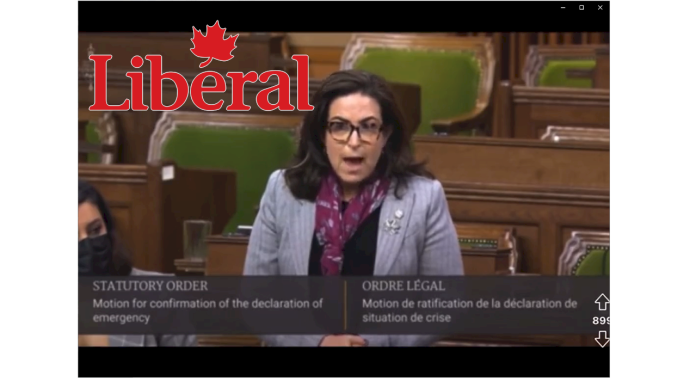 Hey Liberals: proud to be a part of this? You all agree with this hot take from one of your MPs… who said these words in Parliament? You have any kids? Did they hear this? Did you explain it to them? I’m asking because I haven’t seen even one progressive distance themselves from this cretin. Not one.

So I have to assume either you agree with her, which renders you a kook, or you agree that this really should be the message to Canadians, which makes you a liar, immoral, and possibly downright evil. And any sensible person knows it’s extremely important to quash this sort of lunacy — particularly when it is said in our House. Note that I think she should be “allowed” to say it (freedom, see) — it’s just that it should be called out in the loudest possible form. And mocked. And ridiculed. And denounced.

I fail to find any movement of progressives even attempting to come clean, and acknowledge and dismiss the more broadly propagated lies, such as those being told by Justin Trudeau — which are almost exactly like those seen in the video above. In fact it’s quite the opposite. Many are doubling down, and the “news” media are helping push the lies in every way they can. The decision has been made by them to lie. And if that means putting Canada as we know it in the dumper, then they are OK with that, so long as they get their way, and everybody agrees with them; and those who don’t are either locked up, or have had all their rights taken away from them such that they are but prisoners, slaves, animals, or vermin — “trash,” as I saw one woman describe them (some of us) this morning on Twitter — without Twitter banning her. Her tweet was “liked” and retweeted many times by other ever-so compassionate, tolerant, peaceful, unity-loving progressives.

Proud to be Canadian? I am not. I’m utterly ashamed. It couldn’t be otherwise when so many Canadians work to mainstream this kind of cult-like lunacy and lies, demonizing huge swaths of the country (not that it would matter any less even if they were demonizing tiny segments of the country). I honestly think a huge percentage of the country is suffering some kind of madness. To be fair, maybe it’s not just Canadians. Here’s an article popping up this morning from the U.S. which, unlike in Canada, speaks to what mercifully seems to be a minority of Americans, given the Democrats’ horrific and vanishing small polling numbers of late:

Most U.S. voters disapprove of Trudeau’s trucker crackdown, but most Democrats approve: poll
— Trafalgar Group poll finds 65% of Democrats back Trudeau’s response, versus 35% of voters overall

In that poll, 17% of Democrats had not even heard of what’s going on in Canada under the Trudeau crackdown on freedom. This is a testament to the left-wing “news” media, which actually, like most Democrats, find the crackdown not just acceptable but desirable, but knowing how bad it sounds, puts a damper on it (notable exceptions do apply). 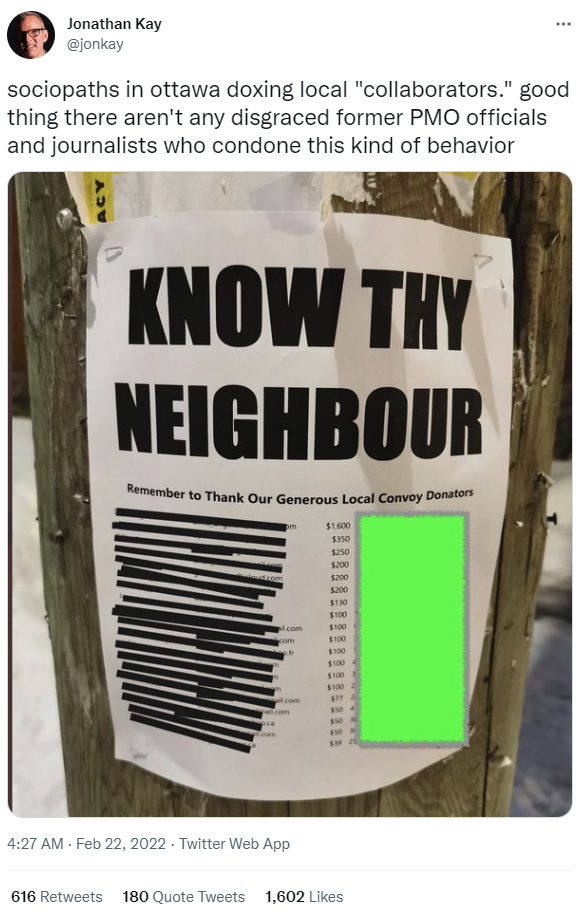 I have an idea based on an admittedly weak grasp of world history, that this is the way tyranny comes about: slowly, a little bit at a time, quietly, certainly by stealth but sometimes in total secret; and then suddenly and with blunt force — maybe deploying police and giving them “extra tools”, and maybe using the army — and quickly – like before you even know what hit you and have time to react and prevent it. It was much like that in Canada when the Emergencies Act was thrust upon us by the Trudeau cabal (cult?), but of course here, despite the “news” media obviously and blatantly lying, outright, to Canadians, we can’t help but see what’s going on ourselves, so even the horrible lying news media couldn’t keep it from you (they just lie to you over and over by saying “don’t believe your lying eyes — “fact check — they’re all white supremacists and Nazis.” And Canadians — like lemmings — believe them).

Closer to my home, Canadian polls show Trudeau’s Emergencies Act declaration is popular, and people are for strict vaccine mandates for all citizens — and mask mandates too. Vaccine passports, lockdowns, travel restrictions, border restrictions, restrictions on gatherings like weddings and funerals, stay-at-home orders — the works. It’s a country of ignorant serfs. Compliant sheep. Useful idiots. I think most Canadians would agree to government-mandated outdoor masking — even on babies — if they were issued by Justin Trudeau or his government. If Justin Trudeau said “Just five more years to flatten the curve,” Canadians would rally and mask-up — triple mask — for the next five years without questioning anybody, and demonizing as “Nazis” those who question the “science” (there are no air quotes big enough to put around those politically weaponized words, which thanks to the progressive left, have become nothing short of a joke).

We know this obsequiousness to progressive governments to now be the dominant Canadian culture because after Trudeau explained to Canadians that the truckers’ convoy consisted of Nazis, misogynists, racists, and terrorists waving swastikas, despite such claims being the most hateful, divisive, outlandish, and venomous claims that a human could utter, most Canadians dutifully nodded their heads in agreement, and many even felt emboldened enough to “out” themselves as “one of the good guys” and repeat it all over social media. The “news” media did it too, often using Trudeau’s exact same words, without questioning his motives, investigating, or challenging him whatsoever. They agree with him. So it is now the popular notion. The common knowledge. And yet it’s a lie.

Even closer to home, I see that our local newspaper polled its readers and found that even if our indoor mask mandates were lifted (and there’s no current plan to do so by our extremely woke, and openly socialist NDP government), fully half the people will just go ahead and keep wearing them anyway. A quarter of them said they would just continue to wear one all the time — presumably indoors or out, and forever more.

We asked readers the question “Would you continue to wear a mask even if the mandate was dropped?” and provided three different options.

Coming in as the clear cut choice was 50 percent of our 388 participants opting for “Yes, only in indoors or crowded places.” Another 24 percent said nothing will change if the mandate is lifted, opting for “Yes, I prefer to keep wearing it.”

Only a quarter said they were anxious to get rid of the mandates.

Rounding out the responses was the remaining 26 percent of our readers telling us “No, I can’t wait to get rid of it.”

For the record, our community voted for the pro-mandate, pro Emergencies Act Liberal Carla Qualtrough the last two times.

It’s not simply that I disagree with these people. I disagree with most people since I am a conservative. I can live with that. Although the biggest lot of people in Canada, the progressives (Liberals, NDP, Communists, Socialist Party members, Greens, etc) go about life thinking everybody in the room agrees with them, and they can’t shut up about their latest hot take on the latest woke moonbattery, some can keep to themselves. I can hang with people like that. But when it comes to accepting that I spend literally the rest of my life amongst masked lemmings who are practicing little more than performance art, displaying their government compliance and therefore their political ideology, and doing so as if to reinforce and make visible the already obvious divisions in our country, or do it to exhibit their political label — and given that this is a socially and psychologically and economically and civilizationally destructive practice, I feel as though I’m not even remotely compatible with these people anymore.

I’m seriously concerned many of these people have been so severely brainwashed over time — perhaps thanks to the state-owned CBC and its repeated nonsense and propaganda — that just as many people in cults find themselves stuck, these people are hopelessly stuck in an ideology. They’ve gotten themselves so invested in it, they can’t possibly change course now, because they are then forced to acknowledge they were mistaken, and feel like they’re making fools of themselves (people would actually see them as enlightened and smart, but they can’t see that). Politicians on the left are finding themselves stuck in this same quagmire. It seems to me they are now suffering a madness that I cannot remedy, as much as I’d like to, and as much as I’ve tried over the years with this website, for example.

At the root of the problem is unrelenting propaganda and lies by governments and bureaucrats who yearn for power and control of our lives and that of our nation, at literally any cost; and a “news” media, academia, and entertainment media which are of an exactly like mind, and are advancing the madness. Progressives, in a word. They did this.

Previous article
Wall Street Journal: “Trudeau’s Destructive ‘Emergency’”
Next article
The benevolent Trudeau graciously allows us to have our freedom back… for now.