Forget the loss of trust in institutions. I’ve lost trust in my country. 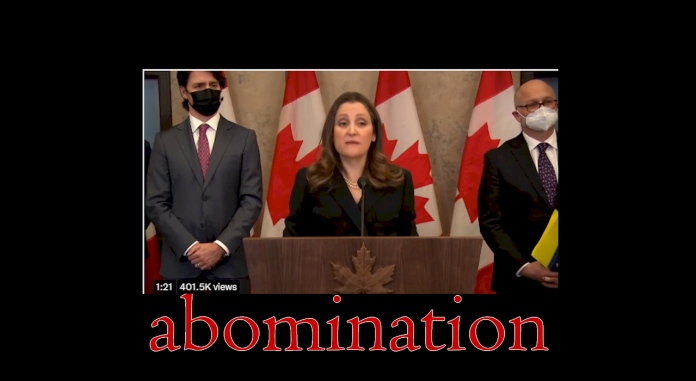 The infantile Trudeau’s vile, divisive declaration a week or two ago that those who oppose him have “unacceptable views” — and make no mistake, this is a term of hate — has, today, a new, more frightening meaning. What was once just another one of his excruciatingly divisive, insulting, condescending, snotty, snobby, elitist smears, another one the likes of which you might have brushed off as nothing more than more of his now ubiquitous woke progressive idiot-speak, has become considerably more legally meaningful, under his draconian declaration of the Emergencies Act.

I’m not trying to scare anybody, merely state the obvious: with the invocation of the Emergencies Act, and given Trudeau’s (and his fellow travelers in the Liberal Party and the NDP) attitude that he spews toward people with those “unacceptable views,” people should be more than a little concerned for themselves — their freedom, their livelihoods, their money, and that of their “unacceptable” friends and family members.

Trudeau’s deputy, Chrystia Freeland (a bitterly ironic last name in all of this, if ever there was one), evoked the words typical of authoritarians throughout history, yesterday, when she warned, ominously, that “This is about following the money. This is about stopping the financing of these illegal blockades.”

Note that the “about” is extremely granular. Very selective. This is only “about” this — the truckers’ convoy. Not about following the scandalous and corrupt We Foundation (the extent to which we have utterly no clue whatsoever – by design) and its literally countless hundreds of millions of dollars — sometimes Trudeau-related, both foreign and domestic. It’s not about the (foreign!) Communist Chinese  Party infiltrating all of Canada with its funding of those who are Trudeau-adjacent and his liberal industrial complex (see article photo); and not about numerous funky alleged (because who the hell knows – nobody looked!) SNC Lavalin global payoffs and bribes and questions as to why Trudeau fought so hard to get them off the hook legally; not about the hundreds of millions flowing into extremist climate protest movements that have shut Canadian streets and whole cities down repeatedly over the years; nor for the anti-pipeline protests that have very seriously hobbled our entire economy for years in the past — and now well into the future; and she has no concern over the hundreds of millions in foreign BLM funding that to me is obviously suspicious if not seriously dangerous; nor the funding of terrorists in Antifa or the several other extreme left-wing groups; and it’s not about following the money laundering and decimation of Canada’s real estate market and businesses.

And believe me, it isn’t about following this money, which will go down the memory hole like so much of the other Trudeau ethical breaches and corruption: 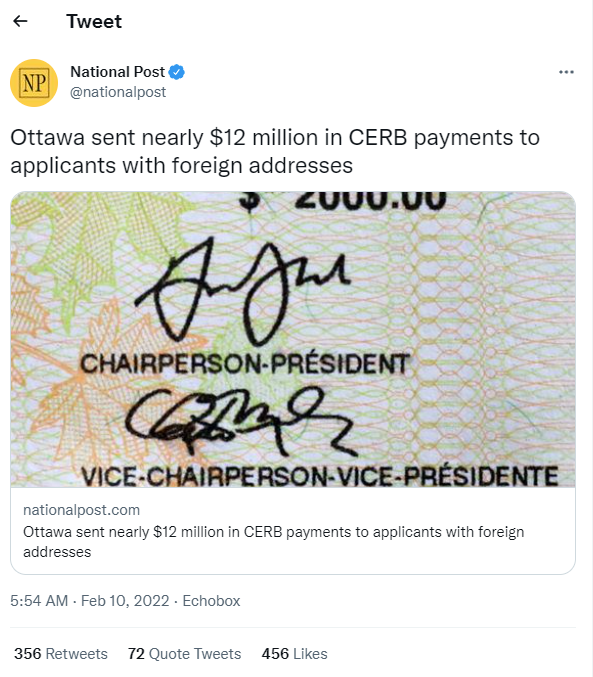 In what amounts to one of the most frightening authoritarian moves in my memory, Freeland added these terse comments to her already shambolic missive:

“[W]e are broadening the scope of Canada’s anti-money laundering and terrorist financing rules so that they cover crowdfunding platforms and the payment service providers they use. These changes cover all forms of transactions, including digital assets such as cryptocurrencies. …”

Never really elucidating on all of the implications, because she’s as slippery as her boss, she goes on:

“The illegal blockades have highlighted the fact that crowdfunding platforms, and some of the payment service providers they use, are not fully captured under the Proceeds of Crime and Terrorist Financing Act…”

“Consider yourselves warned,” she said. By which she meant only the truckers’ freedom convoy supporters. Not Liberal Party supporters.

Well, I do consider myself warned. I am also worried, to say the least. Because I think she considers me either a criminal, or a terrorist, or something else “not fully captured under the Proceeds of Crime and Terrorist Financing Act…”

For this now nearly 25-year-old website I rely on my readers funding it through a digital service. I have shown my support for the truckers’ convoy or at least their grievances. I have posted thousands of “unacceptable views” on this and all manner of things antithetical to liberal-left ideology. Now that the government has ordered the tech world and banks to work with them, am I at risk? Compared to what Paypal did to me already (for what I would argue was for the same political concern, though I think it was without the government prodding them), this is substantially more serious and scary, because it’s my country doing it to me. My country — or at least my government — is fighting me. Using private companies. Threatening me. “Warning” me. Trying to freak me out. I’m “unacceptable!”

I got this email this morning. In light of the Trudeau/Freeland/Singh cabal and their authoritarian dictates, I’m not sure what to make of it: is it a covert police operation trying to dupe me into demonstrating my material or fundraising or financial support for the truckers’ freedom convoy, posting it on my website so they can officially call me a criminal or terrorist, then shut me down, setting me up for frozen bank accounts, or worse — my arrest as a “supporter?” Should I be looking out my office window worried that police are there? 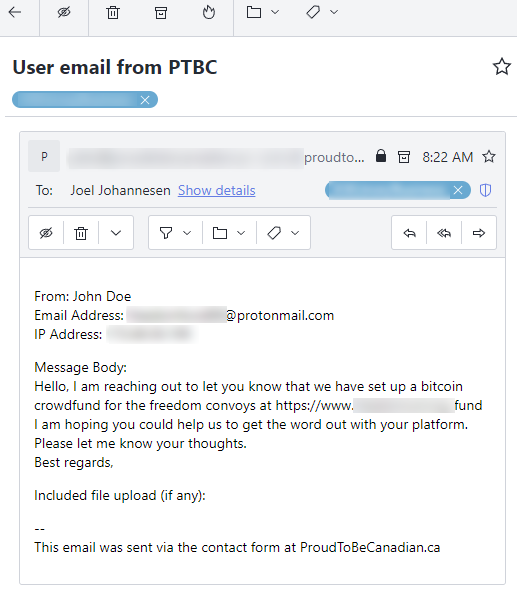 Maybe it’s actually from freedom convoy supporters. The “FROM” address indicates that. But even somebody as intellectually vacuous as Justin Trudeau could figure out how to set up a fake email address. Certainly, the RCMP or the spy agency could. The website itself looks legitimate enough, though any qualifying “about” information is missing, perhaps understandably (thus I blurred the URL above). And I note the website is alive — not shut down, so that’s weird in and of itself, if it’s supposedly illegal and terrorism-related, as Freeland implies. I’d love to support them, (particularly if I could specify that it wasn’t for illegal activity such as border blockades, since as I’ve indicated before, I am not on board with that). Is it a false flag operation? A setup? For real? I don’t know. I don’t know who to trust.

It seems like contacting a lawyer as a preemptive defensive action is itself moot, given that the traditional rule of law and liberties as we knew them are now literally out the window. No court orders are needed for any bank or tech firm to lock up one’s financial accounts, shut down a website, nor, I presume, for police to arrest, or even jail me for supporting the truckers or offering viers which they deem to be “unacceptable.” What good is a lawyer in this case?

What good is even living in a situation — in a country — like this? Think about that honestly, all you “liberals” and progressives.

People the world over have seen the unfolding horror show in much the same way I do: 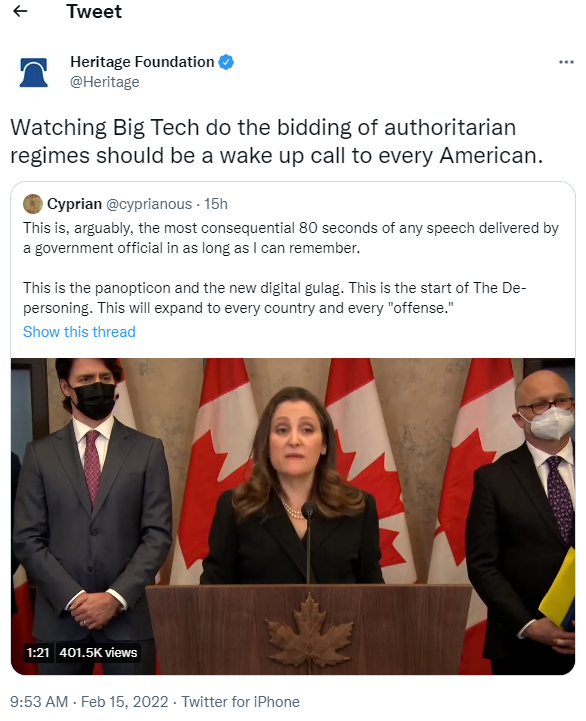