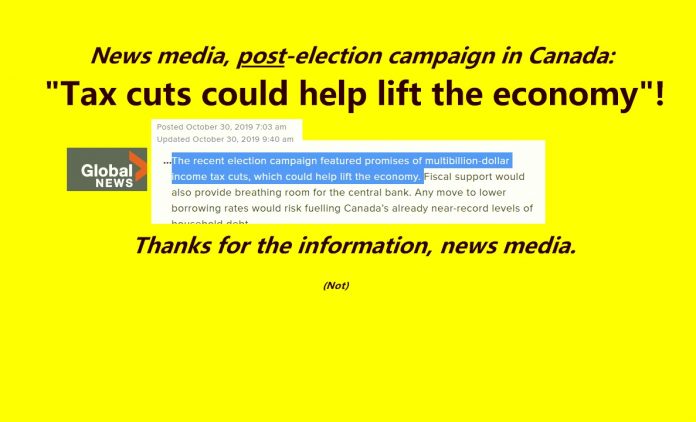 During one of my server crashes seven or so weeks ago, I mocked the Canadian media touting Canada’s second quarter’s GDP growth as 3.7%, which they derived by misstating (by golly! Oops!) an annualized growth rate as a second-quarter-only growth rate. Canada’s second quarter growth this year was 0.9 per cent, but they all literally, shamelessly, reported it as 3.7% second-quarter growth, without telling you it was an annualized rate. Finance Minister Bill Morneau joined in the false reporting and tweeted about it. It was all baloney. Fake news in its most literal sense. In a word it was garbage reporting. But you know, election shelection, democracy, shemocracy.

Here is how they actually reported Canada’s second quarter growth (which was 0.9%), as borrowed from the Fraser Institute’s article which was better than mine anyway:

My post about it was a beauty: full of explosive language and opprobrium. And then I lost the post in the server crash. But for a good synopsis of that garbage reporting including a rebuke of Morneau (whom the Fraser Institute gently suggests was merely “fooled” by the media reporting on the statistics), read the Fraser Institute’s own article about it, where, you can be sure, they are much more measured in the tonal quality of their outrage.

The Canadian media will not make the same “oopsie mistake” today. That’s because it’s about “Trump’s America,” and THAT growth is real, at 1.9% — annualized — after factoring in the third quarter results. Folks, that is not 7.6% per year anywhere except in “Trudeau’s Canada,” and only when his fawning media are the ones reporting it about their boy. The media will be sure to not deceive you as such in this particular case.

Let’s check my theory. Oh OK, here’s the actual line from the Globe and Mail article about it today:

…Government data released on Wednesday showed the economy grew at a 1.9 per cent annual rate in the third quarter…

Did you catch the words ANNUAL RATE? Compare that with “3.7% second-quarter growth.” It’s hideous. (If you’re interested, the Bank of Canada says Canada may eke out a 1.5% annualized growth rate for 2019. Yeah wow huh — even though the second quarter alone was reported as being 3.7%! Funky how it’s not 14-odd percent! Whaddup?)

If you want to read about it, here is the actual government document is here. Just read it if you don’t want any of that expert media filtering done to your head.

I’ll just add this one other headline about private sector job growth:

…because by way of another fun comparison, I wrote about the horrible spectre of Canadian job growth last month, wherein a ton of public sector (read: government) politburo jobs were created by Trudeau’s big-government central planners and then news of it was pumped-up as a great thing by the liberals’ media division; and yet private-sector jobs went the way of the Trudeau bird (— just as they wished). In this case, it’s not a news media reporting problem as much as a progressive/left-wing problem, and moreover, a Canada problem. Here’s that article:

Sometimes ya gotta laugh. Or cry. Here’s what a news article at Globalnews.ca said — TODAY — NOT DURING THE ELECTION CAMPAIGN — in an piece about the Bank of Canada’s decision to hold interest rates steady today. Again, note this is reporting just after the election in which Conservatives touted tax cuts:

Also this, in that same report (today, post-election-campaign):

Previous article
Canada has sunk to 6th place in the world for its citizens’ generosity; dramatic decline since 2015
Next article
Globe and Mail presumes to lecture us on politics and how the Conservatives can become “adults.”