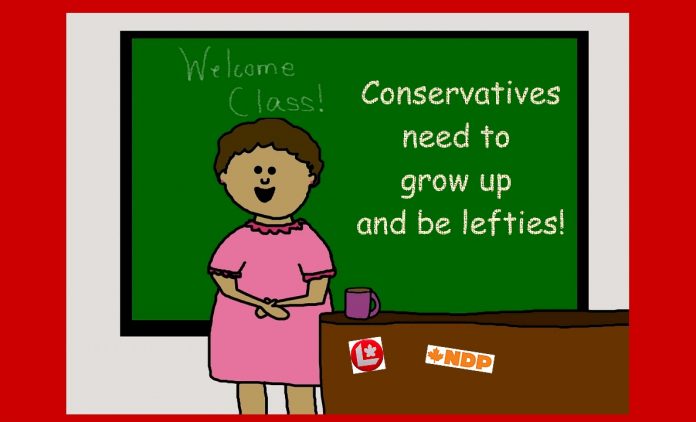 I won’t take any lessons from the Globe and Mail, nor most any opinion-based media which borders dangerously close to being liberal propaganda, about the Conservative Party and its way forward. And nor should you.

But the Globe and Mail, like much of today’s media and most of the left, is cocky, self-important, and arrogant, and it doesn’t care what you or I think. They will just go ahead and presume to educate us about what the Conservative Party needs to do to win elections. So last week they launched “It’s deeper than Andrew Scheer: The root of the Conservative Party’s failure to launch,” and there’s so much to learn, they’re already on “Part Three” with more to come.

This is ostensibly for Conservatives. Who can’t sort it out themselves. Which actually means Conservatives, hold onto your principles, because they’re about to be attacked by liberals and leftists.

This erudition comes despite the Conservatives winning the popular vote. Which the Conservatives did in spite of the Globe and Mail and all the rest virtually (and certainly editorially) licking Justin Trudeau’s and Jagmeet Singh’s face. Who should be teaching whom?

We are to understand that the Conservatives are sure to win over the swells in liberal T.O., which is The Most Important Thing Ever, if the Conservatives just grow up and, for one thing, drop their stupid conservative-y hectoring about never-ending deficits and the ever-growing big government domination of our lives, and join the liberals and leftists who are “adult” about it all, or something.

What else is the Conservative platform missing? Adult talk about spending, the size of government – and the deficit.

So be liberal, or even more left, if I understand correctly. This is a panel of experts who also write this by way of additional helpful suggestion:

…Way back in 2008, the country’s first carbon tax was introduced in British Columbia – by the provincial Liberal Party, a.k.a. B.C.’s right-wing party. That carbon levy paid for other tax cuts, giving B.C. the lowest provincial income-tax rates for lower- and middle-income people…

For those of you who don’t live in BC, let me explain a little something to you: The BC Liberals are “a.k.a. right-wing” in exactly the same way a toaster is a fruit. The BC Liberals are, in reality, in the Canadian context, as liberal as liberal can be. “Right-wing” is the least accurate description I could possibly muster. What’s at play here is wishful thinking.

And while I’m on that paragraph (and I can’t dissect every paragraph in their three-part series because I’d be here all day), here’s where else they went wrong in their lesson plan: they forgot, rather conveniently (inasmuch as it totally wrecks beyond any recognition their whole point), the BC Liberals’ carbon tax scheme started out as — promised on a stack of Bibles as — a revenue-neutral scheme; but as soon as the further-left NDP took power in 2017 (even though the BC Liberals, in this case, won the popular vote!), the BC NDP government threw the concept of revenue-neutrality out the window. I mean threw it out the window like with a rocket-launcher, so proud were they to show they couldn’t care less about screwing the voters who were so so deplorable that they didn’t actually vote for the NDP. (By the way, the BC NDP campaigned AGAINST the carbon tax back when the BC Liberals started it. Go figure leftists’ “principles,” huh? Any upcoming series on left-wing party outright lies, lack of principle, and the slippery-slope syndrome, Globe and Mail? Or nuh?)

Also left out, and this is big: the scheme (revenue-neutral or not) has proven, scientifically (because I know how important that word is to some of you on the left — I mean when it’s convenient, of course, like when we’re not talking about abortion or transgenders), to have NOT reduced carbon emissions since its introduction, as was promised on a stack of science journals. That news was buried in obscure headlines on page 289 of your local paper in September of this year while there was an election going on and it wouldn’t be cool for the “news” media to make a thing of it, lest people vote like stupid children for the juvenile Conservatives.

A left-wing pundit from the ardently-left TheTyee.ca, Bill Tieleman, supposedly an adult, wrote this — back when those “right-wingers” were in power in BC:

…The only problem is that B.C.’s carbon tax doesn’t work.

Whether you look at greenhouse gas emissions or economic statistics, B.C. carbon tax has tanked.

Even on a per capita basis, emissions have risen.

Just this past September, the very grown-up Canadian Taxpayer Federation’s Kris Sims wrote similarly. And they’re talking about the big fail down in Seattle too, where they are just as left-wing as BC. And here. And here.

When you make so many serious errors in your teaching, and are caught favoring a partisan political viewpoint or ideology at the expense of the full truth, it no longer qualifies as education, or even as helpful hints. It’s propaganda.

What’s the third great idea according to the Globe and Mail? Abandoning principle, like the others, and becoming pro-abortion and addressing everyone as “xi?” I wouldn’t bet against it. They’ve left it open for further installments. Yup, there’s apparently more than three installments in the series, because so much has to change about those idiots — who won the popular vote.

But I’ve seen nothing coming up on, say, how so many more Canadians are open to some reasonable restrictions on abortions these days. Or something, anything, on the value of capitalism and how we have benefited from it, as opposed to socialism, which has wrecked countries and cost lives; and how we can and should regain our faith in our founding economic principles of free enterprise. Or the threat to democracy posed by the radical cancel-culture and anti-free-speech leftist fascists. Or the overt and increasingly brazen socialist indoctrination taking place at our schools and universities… and the news media. And nothing about how the left-wing media is actually the party responsible for much of the misinformation, even though they pretend to rise above the fray.

No, see, it’s just the Conservative Party of Canada, which won the popular vote in 2019, which has a “deep problem,” somehow.

Previous articleU.S. economy up 1.9% (annual GDP growth); or as Canadian media would say if it were in Trudeau-governed Canada, 7.6%.
Next articleMexicans fly to Canada, then ditch Canada for the USA.