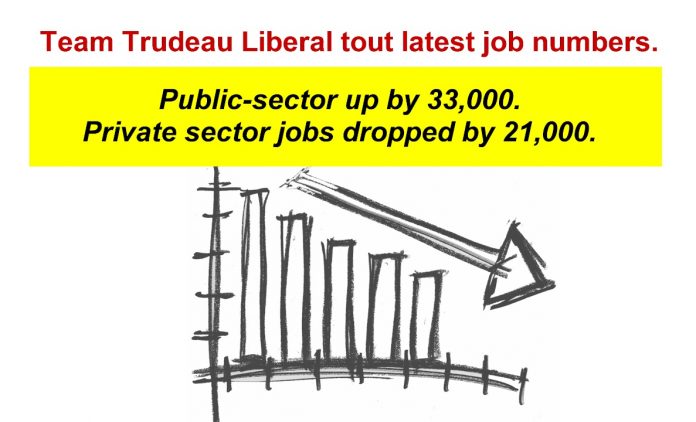 Trudeau and Butts were busy tweeting and retweeting about the today’s latest employment numbers showing an increase of 54,000 jobs in September (being very careful to not credit President Trump — that will come only when the Canadian economy officially goes into recession). But, well, lots of buts:

Canadian Press:
…but with economists warning that the numbers weren’t entirely rosy.

I’m going to cut right to the chase:

Financial Post
The underlying details of the report were not as strong as the headline number. While the gains were all full-time, they were entirely public-sector positions and self-employed. Private sector jobs dropped by 21,000, with continued weakness in goods-producing industries.

Specifically, StatsCan reported: “In the public sector, the number of employees increased by 33,000.”

Canadian Press:
BMO chief economist Doug Porter said that despite the rock-solid growth in job numbers over the last year, the broader economy remains lacklustre with year-over-year GDP growth crawling along at 1.3 per cent.

… it’s not really translating into the big gains in spending or the broader economy in terms of overall output gains. Growth is still quite modest in this country, so we’re not getting a whole lot of payback…

This lethargic growth speaks to a broader problem of what is, demonstrably, poor overall economic policy, and even more so, a problem with the Liberals’ broad national policy; and this is not at all positive. A 1.3% growth rate during great economic times? Bad. For a government hell bent on spending and massive deficits with no end in site, and without even a plan for an end in site (and the NDP is literally PLANNING even more massive deficits, as per their costing released today), this is all bad, all day long. Thus, no retweets of that message!

And so much for Trudeau being the darling of the youth:

Globe and Mail
Young workers aged 15 to 24 years old saw drops in the ranks of full- and part-time workers, inching their unemployment rate to 11.9 per cent – not all that dissimilar from the same time one year ago.

I predict an immediate halt to all those youth-centric, “social media influencer” and news-media-driven, “get out the [reliably left-wing youth] vote!” messages, and that left-wing-driven push for yummy 16-year-olds to vote.

It goes on, but politically, this next bit is the most explosive news, which an honest media would swarm over: After slamming every policy of Ontario Premier Doug Ford constantly, almost as if Trudeau is the Ontario Liberal Opposition Leader, and becoming BFFs with the carbon tax-luvin’ left-wing NDP Premier of BC, here’s another article they won’t retweet:

Business in Vancouver
Employment sinks in B.C. with 8,400 jobs lost in September

What happened: Jobs in B.C. declined significantly on a monthly basis.

…B.C.’s dominance in the labour market took a sizeable hit when closing out the summer, shedding 8,400 jobs between August and September. …

It’s BC’s fourth month of decline for that NDP government, after being elected in 2017 and inheriting a Canada-leading economy. BC used to lead the country with steady employment increases for years. Butt I love that last bit about Ontario. It’s the opposite of BC. It used to be the BIG FAIL under the Liberals, but now, it’s the big winner. I mean it’s almost funny. It’s like it’s all butts-backward for Butts and Trudeau.

Even the government’s StatsCan website says this in its report:

Employment in Ontario rose by 41,000 in September, mostly in full-time work.

Embarrassing. As this tweeter said:

The LPC has spent the entire campaign attacking Doug Ford and are now holding a 41k jump in Ontario employment up as evidence of how his agenda is hurting people?

I'm no Doug Ford fan, but the cognitive dissonance here is something. https://t.co/MUPqVSYJqz

Cognitive dissonance? Good term, but no, this is something worse. Public-sector jobs up, and private-sector jobs down? But Butts writes, “Let’s keep this going”?

Slam Ford and cozy-up to Horgan, but after seeing the results, “Let’s keep this going”?

Moreover, this is a huge failure of the Trudeau Liberal campaign narrative. They are using stats to prove their policies are on target, but they are actually proof that they are not. And proof that the main part of the Trudeau Liberal campaign thrust and message is utterly false. And this very salient fact is, as if I had to tell you, being TOTALLY overlooked by the media. Obviously. It should actually be the defining feature of the election campaign from here to the end.

Previous articleWhatever the left accuses you of, they are guilty of — example 692
Next articleLiberal candidate fuels up in MAINE, USA. Saves on the carbon tax dontchaknow!