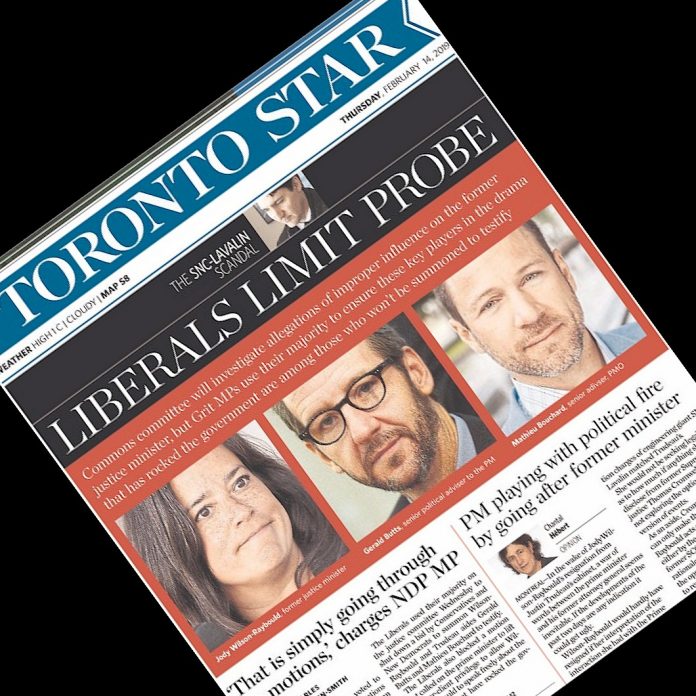 This is your big, huge and growing, left-wing government at work on any typical day.

The fact that you don’t get to see it at work like this is owed to a studious and studiously liberal media protecting the liberals and their big government — and protecting those giant corporations like SNC-Lavalin who are known by the media to be huge supporters of the Liberals — on a daily basis. They cover-up crap like this all day long. They did not report widely, if at all, the fact that the Liberals stuffed the last budget bill — a budget bill yet — with changes to criminal laws designed to protect SNC-Lavalin, knowing SNC-Lavalin was in deep criminal trouble; nor that SNC-Lavalin lobbied for these exact changes to protect themselves, and the phony Liberals obliged, in an exquisite example of crony capitalism and, I’ll say what I think: possible criminal corruption and collusion conspiracy. This is just an example. We don’t ever get to see many.

Not using omnibus bills to bury controversial proposals was a key Liberal Party election promise. Smugly breaking that promise and making a major change to the Criminal Code by using the Budget Implementation Act for the protection of a Party supporter is corruption on a grand scale. But this one incidence of Liberal Party corruption is a real doozy because it shines a light on so many items on the menu of Liberal Party and Justin Trudeau BS, all at once.

But back to the point: The liberal media only reports on this stuff when forced to — like when it becomes too obvious or too embarrassing not to, as the Globe and Mail did or had to do in this case. Then they feign shock and outrage, and unbury their pretence of objective journalism. To an extent. For a short time. We know this from the last Liberal scandal — the “sponsorship” scandal — which as I see it was the biggest corruption scandal ever to occur in this country’s history — and which, as you may have noticed, the media stopped talking about exactly one week after it happened.

When it’s a conservative government the news media act as stenographers and report on everything they are told, by liberals, every day. “News” stories read even more than usual like they emanated directly from the communications office of the Liberal Party of Canada (or worse, the NDP). See coverage of the Mueller “Russia Collusion” nonsense, or closer to home, the totally fallacious and malign “Hidden Agenda” campaign against the Conservatives — an example of media collusion and corruption if ever there was one, conducted by the liberal media on behalf of leftist parties for over a decade. Stories during conservative reigns are replete with outlandish accusations of criminality or corruption, or of multiple gang rapes, as in the case of conservative Judge Kavanaugh, quoting “unnamed sources” and “those close to the situation,” and which, after proven untrue and fake, are left to sit there, uncorroborated and uncorrected. On purpose. They then repeat this corruption, this collusion, over and over.

But we now have to watch the media beclown themselves as they begrudgingly cover this new liberal-left mess. And the “begrudging” is palpable.

Today’s overly subdued headlines are mostly flat and colorless, and read like this actual headline, created in the face of a huge national scandal:

Don’t worry, you were meant to yawn at that.

The Toronto Star division of the liberal-left had an shockingly steady hand today too, wherein they did not use the word fascism even once, although they did allow “scandal” (alas, no “-gate”) into their pages, and managed to simply state a fact without bashing their Liberals. This is an amazing act of political protection. To wit:

Wilson-Raybould’s resignation is an off-brand, disastrous narrative for the Liberals

Well yes but cheer up, the media isn’t done whitewashing it yet. In that article, the writer helps by putting quotes around the word scandals, as such:

Opponents, as well as other observers, will draw a connection between the SNC-Lavalin situation and “scandals” past.

Don’t worry, this isn’t a “real” scandal, any more than the other “scandal” was an actual scandal. Vote Liberal!

The clearly caught-being-bad Liberals complain that the opposition Conservatives
(and the NDP, which as a result their constant and ever-so phony virtue-signaling, no longer deserve any credibility or respect), are simply launching a witch-hunt. As if they’re against witch-hunts. Their Democrat cousin in the U.S. (in collusion with the liberal media) is still engaged in two-year-old actual witch-hunt against Donald Trump, so what we’ve got here is a funky international form of projection. They are lying. The Conservatives up north are trying to do their job and preserve what’s left of any respect for Canadian government institutions, and our rule of law, in asking for a full investigation. And that’s just an objective fact. The liberals in both countries are lying and, I believe, possibly outright corrupt.

So liberals, especially in the media, spare us. Don’t fake shock or outrage. This is all working exactly according to plan, as it does every single day. This (quote) scandal (unquote) will be well managed by you all, and then it’s right back to getting those blessed Liberals and NDP re-elected.

Lament that you’ve been caught — once again — all you want. Because that’s all you can possibly be sorry about; and I hope it will be the undoing of all of you, eventually.