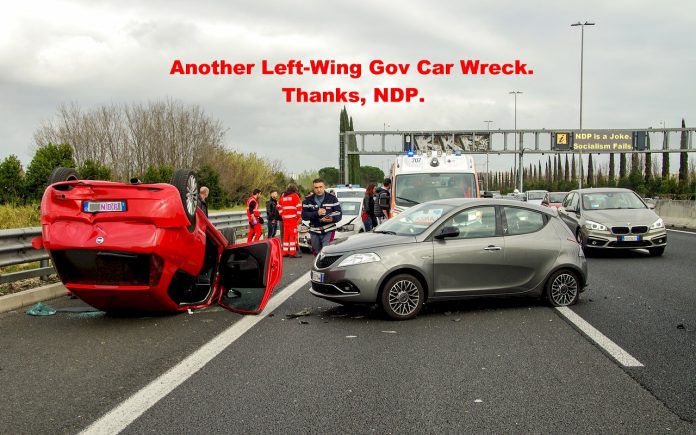 You can call it niggling (and no, incessantly-triggered lefty snowflakes, that is not a racist word) but when a big far-leftist government creation, in this case (but there are plenty) BC’s Insurance “Corporation” of BC (ICBC) losses billions of dollars — it is not “news” as much as “the latest update on far-leftist government failures.”

And media, if you’re going to skip over those details, here’s a tip: maybe have a private-schooled professional proofread your efforts prior to publication.

The Insurance Corp. of B.C. revealed Thursday that it’s projected deficit for the current fiscal year is $1.18 billion — roughly $290 million worse than the last estimate just two months ago.

It’s not it’s, it’s its. Also, you left out the words “socialist” and “NDP,” and forgot to put quotes around “Corp” (you’re writing about a state-owned, state-run, North Korean-style bureaucracy run by the central-government politburo, comrade).

You can’t go an hour without reading about a “right-leaning government” or a “Conservative government” or one “center-right” or “right-leaning” organization or another. But when it’s about a failed state-owned, state-run thing like ICBC, and the politburo is notably far-leftist like the BC NDP, it’s all simply reduced to “the Insurance Corp. of B.C.” Neat.

Also, if they are to be taken as a responsible news organization, I would advise them to point out more generally that far-leftist “progressive” “democratic socialist” governments — which could be abbreviated as “The NDP” after that explanation — are a total wreck and that this is just another of myriad examples. Actually, they should start out by acknowledging and reminding readers (who are mostly publicly-schooled, after all) that this government is in fact far-leftist, “progressive,” and “democratic socialist” — which neither this paper nor any other ever does — and then let the people decide. As Fox News says, “we report, you decide.” But, see, you have to start by reporting it all.