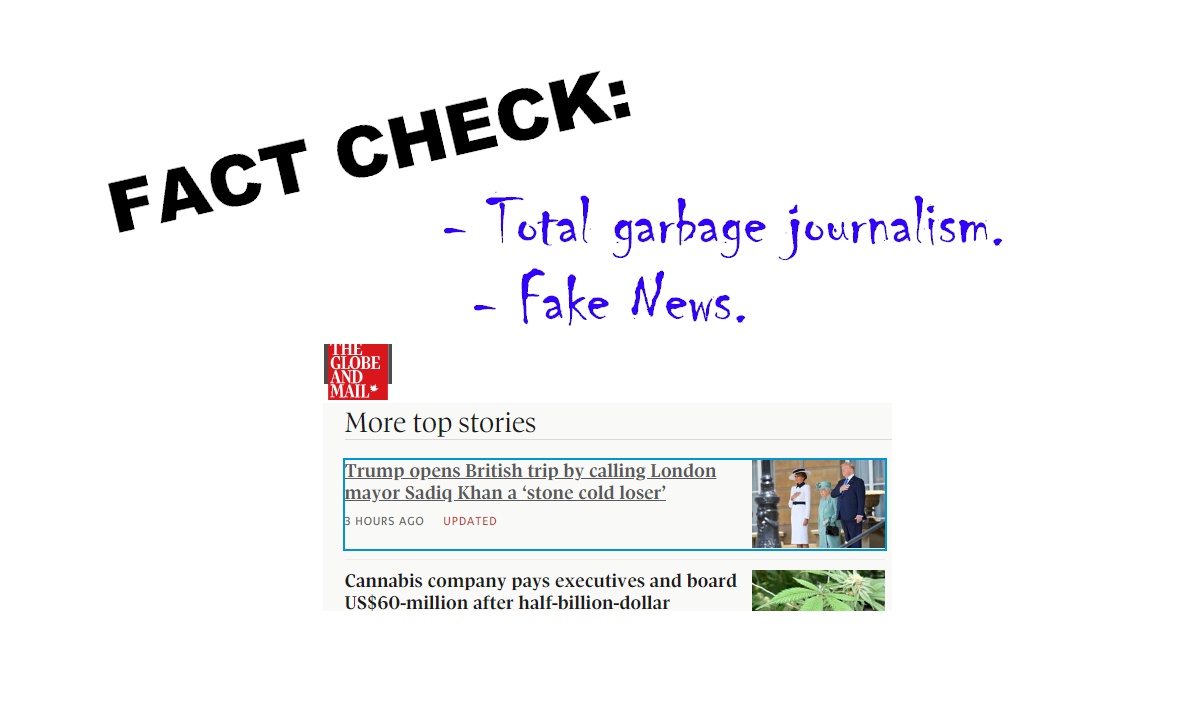 Saying in headlines that Trump opened his London trip by insulting the London Mayor Sadiq Khan with “he’s a stone cold loser,” is horrible journalism. It’s a blatant and nefarious omission of pertinent facts.

Several articles about this completely, purposely, omit any reference to the fact that the day before, that London mayor called Donald Trump a fascist. That’s how the London mayor ever-so graciously welcomed a visiting president of the United States. That’s how the trip actually “opened.”

You can say what you want about this exchange; call it childish, call it stupid. (And do it in the opinion or op-ed section, not in the news report itself.)  But the fact is, it was an exchange. There were two people insulting. And news reporters and newspapers ought to report the facts and the entire context instead of lying to you to advance an agenda — in this case, once again, it’s an anti-Trump agenda. Think whatever you want about Trump. As a professional, you’re supposed to be able to report facts without letting your emotions or petty politics get in the way. Facts are facts. (And if you think of yourself as oh-so-grown up and think that exchange was childish, here’s more facts: it looks a little churlish or peevish and downright childish and stupid to put your hate on such public display as a professional.)

Even the left-wing Guardian newspaper began an article in a more fair manner:

The mayor of London, Sadiq Khan, has compared the language used by Donald Trump to rally his supporters to that of “the fascists of the 20th century” in an explosive intervention before the US president’s state visit to London that begins on Monday.

The Globe and Mail’s AP report used other parts of the London Mayor’s statement, but purposely omitted the part of the sentence where Khan called Trump a “fascist.” That’s manipulating the news.

When leftist idiots who are even dumber than the far-left London mayor call me a fascist, as they do, I hit back with extreme asymmetry and a total disregard for any semblance of proper proportion on my part, if I have time. Trump rightly does the same thing usually. In this case, calling Khan a “stone cold loser” (which Khan objectively is, but that’s beside the point) after being called a “fascist,” is like throwing fluff at a surly bear. But moreover, totally justified on a human level.

Of course the Guardian then turned their tiny measure of “honesty” into another farce, by going on and including the other lie making the rounds, which is the lie that Trump just up and called the Duchess of Sussex Meghan Markle “nasty.” Virtually all the other media are doing this same thing. This time the omitted the rest of the interview’s back-and-forth leading up to the use of that word in context.

The dishonest Guardian include this line, and only this line: “He also used the interview to describe the Duchess of Sussex, as “nasty”.”  Yup, just cleared his throat and called her nasty for absolutely no reason! Like he did to Hillary, fo no reason!

CNN and every media outlet ran with that lie today, Canadian media too. It’s the lie of quoting somebody totally out of context, on purpose. It’s really an immature, emotional response on the part of the reporters who just can’t compartmentalize their hate and anger toward the guy and act like professionals. It betrays a weak intellect, and even weaker arguments (the reporter shouldn’t even be trying to make arguments, duh). Conservatives get hit with this BS all day long, every day. And yes, it’s totally intellectually dishonest, makes a mockery of journalism once again, and it is really just a total garbage thing to do from a human perspective.

Bonchie at Redstate picks up that story:

As usual, the real story turns out to be much different than CNN makes it out to be. Here’s the full transcript.

What Trump was actually saying was that he didn’t realize that Meghan Markle had been nasty about his possible election with her pledge to leave the country for Canada. He was not calling her “nasty” as a person and he was answering within the context of a question asked of him.

This isn’t even one of those times where you have to sort of interpret what Trump meant. The transcript is clear. Anybody that speaks English can read it and see exactly what he was saying. Framing it as Trump asserting that Markle “is nasty,” as CNN did, is simply false.

Public figures using their celebrity status to publicly denigrate people, as Markle did, is a really nasty thing to do (to say nothing of the childishness and stupidity of such a remark vis-a-vis one’s profession — but it seems like intelligence and honesty and one’s professional integrity is out the window these days in favor of left-wing agenda-driving). She was being nasty to Trump. There’s a fact you can report.

Seems like all the news media is going for “more fake news” and “driving a political agenda harder” as a new business model to try to rescue themselves. Seems like the same business plan they were using before, only dumber and more fascist.