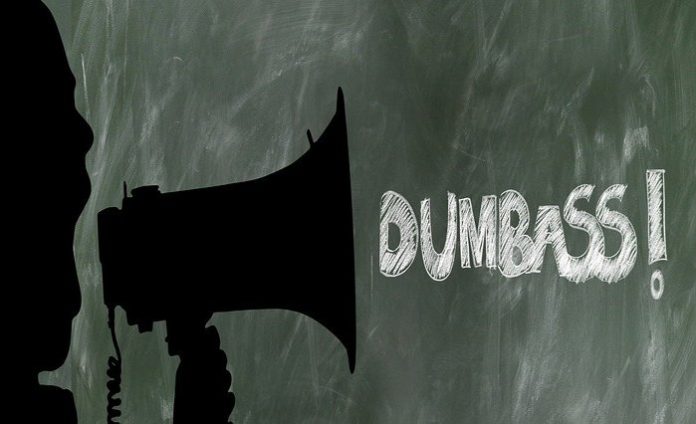 David Suzuki, an environmental extremist and alarmist by profession (a job which, thanks largely to the state-owned CBC, made him a — irony and hypocrisy alert — global jet-setter, owner of four (4) homes, and rich beyond that of 99% of Canadians’ dreams), and who some would describe as a cult leader, said this week to a mob of ever-so moderate “Extinction Rebellion” fellow extremists, “We’re in deep, deep doo-doo … This is what we’re come to. The next stage after this, there are going to be pipelines blown up if our leaders don’t pay attention to what’s going on.”

Now, quite apart from his poor language skills, and moreover, his quixotic fealty toward “our leaders,” whom I choose to more accurately describe as “our servants” largely because I’m not a socialist ass and so I understand our relationship better and in more scientific terms, Suzuki sounds like someone else we know, and we know how most of us felt about that guy, don’t we? Let me remind you: FASCIST!!%#@  NAZI!&^%$#   INSURECTION*™!!!!!#+  INCITING*™%^&   TeRroIsT *@[email protected]!  —and more. And that was just on CBC and CNN.

This experiment is based on pure logic and meant as a serious intellectual exercise, it is not a threat or an incitement to violence. Let me be clear: I don’t condone violence against anybody, and in fact, I implore those who think about it — or glibly muse about it or “warn” about it forthcoming as Suzuki does — to seek help from mental health professionals. Or to stop smoking pot, or crack, or whatever the hell their problem is.

So change the words within the sentence he pooped out (he did say “doo-doo” — “deep, deep doo-doo”!) while maintaining the parameters he established:

“We’re in deep, deep doo-doo … This is what we’re come to. The next stage after this, there are going to be frightened or angry people harming _[insert_name of annoying person here]_ with bombs if our leaders don’t pay attention to what’s going on.”

Acceptable? Of course not. I would imagine being questioned by all, and at the very least slammed down like the stupid dumb-ass I would have to be if I’d actually earnestly said anything like that in public — particularly to a mob of raging enviro activists and extremist loons, as he did. Possibly cancelled, as is the regnant policy of the left. I would imagine my friends and family and professional colleagues besieging me and making a huge effort to get me to submit myself to professional mental health care or drug rehab. And certainly uniformly denouncing what I’d said.

Luckily I’m not a total idiot.

In Suzuki’s case, his own Suzuki Foundation (led by his wife and one of his five children (that’s 5, for those of you who appreciate all the enviro-irony and hypocrisy) embarrassingly disassociated themselves from the remarks of their founder Suzuki. (Serious question: should the CBC who employed him for decades and literally made him his name, and which ostensibly continues to support him, do the same?)

Even the NDP government in BC (those whom Suzuki apparently takes a knee to as his “leaders”) denounced the comments as “unhelpful” (that’s the most you’ll get from like-minded pipeline-hating comrades). In Alberta, they took it more seriously:

The Alberta politician says Suzuki’s remarks are “despicable” and notes more action is being taken to protect infrastructure in the province in light of the comments. He says Suzuki hates pipelines and hates Alberta, bringing up comments from Suzuki in which he likened working in the province’s oil and gas industry to slavery.

“Talking about extinction, rebellion, and blowing up pipelines,” Nixon said. “Dog whistles like this are inciting environmental terrorism, I will not stand for these kinds of remarks in my province or my country.”

Lots of terms used here that the Left just loves to use against, well, anybody they disagree with: “Hate,” “dog whistles,” “inciting,” “terrorism.” The shoe fits.  Wear it.

UPDATE: Nov 26 2021
After being besieged by bad press and the embarrassing disassociation of his incendiary remarks by his own allies — hell, even his own foundation, Suzuki has issued forth his regrets, possibly from one of his four luxury homes. According to his beloved state-owned CBC, which literally made him what he is today, he said, “The remarks I made were poorly chosen and I should not have said them,” in some sort of a statement.

He went on, “Any suggestion that violence is inevitable is wrong and will not lead us to a desperately needed solution to the climate crisis. My words were spoken out of extreme frustration and I apologize.”

Of course what he said cannot be unsaid, or unheard by many of the numerous easily-provoked extreme leftists and radical enviro nutbars and terrorists out there. Should anything happen, we’ll just have to see where the “news” media lays blame. Because I think we can be absolutely sure where they’d lay blame if the political roles were different.