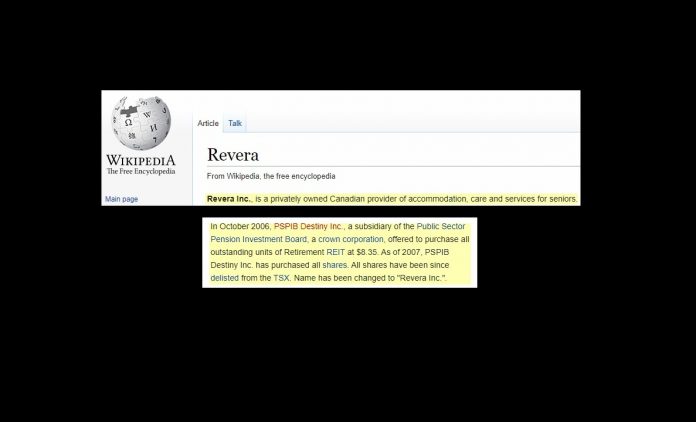 Lefties — NDP leader Jagmeet Singh leading the pack — are all on about the evils of all those profit-seeking “privately-owned” long-term care homes, given the disaster for our seniors that many of them have become during the COVID-19 pandemic in Canada.

But they might be shocked to learn that one of Canada’s biggest “private” owners is actually the federal government.

Sort of like how Purolator Couriers is actually owned by the state-owned Canada Post, making it state-owned as well, the huge “Revera Inc” company is a subsidiary of the Public Sector Pension Investment Board (PSP), a federal Crown corporation. (Coincidentally, and rather sadly, the PSP is charged with investing the pension funds of, among other agencies and federal workers, members of the Canadian Forces, who are themselves heroically fighting within nursing homes in Ontario and Quebec, trying to help keep our seniors alive, and while they are at it, exposing the sordid truth about the homes they found themselves being ordered to save.)

Jagmeet Singh (and Justin Trudeau perhaps even more so) should be way more up-front about this salient government ownership fact, and in the case of Trudeau, about his advanced culpability since he is where the buck stops.

But maybe they don’t even know. So many are confused by all this state-ownership going on in Canada (as in, say, China), that we need charts and lists to keep all the ownership straight. Even Wikipedia gets it wrong, starting out by saying right up-front, “Revera Inc., is a privately owned Canadian provider…”.  It’s “private” in much the same way Purolator is “private,” inasmuch as they are not private at all whatsoever, but rather, they are 100% state-owned.

Here’s Wikipedia describing Revera as “privately owned,” a few lines down finally indicating that in fact, the crown corporation PSP in effect bought all the shares, and then as if to prove it, delisted it from the Toronto Stock Exchange since they — the state — were then the 100% owners: 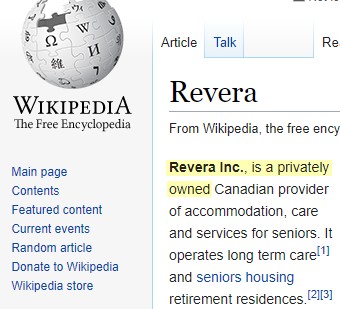 As a crown corporation, PSP reports to Parliament, in this case through the Treasury Board President, who Justin Trudeau decided would be a man for some reason, Quebec Liberal MP Jean-Yves Duclos. PSP’s board members are appointed by… Trudeau & his cabinet. Just like the state-owned CBC and so many other such “private” corporations in Canada.

More than 55,000 seniors live in a Revera (government) -owned property  —or did before they died. When you see headlines like this one at the other state-owned “corporation,” CBC, reporting things like this, it’s hard to keep track of numbers:

So, surely it’s 54,950 or fewer now. But I don’t know how many dead seniors used to live in a Revera property. Maybe a few. Maybe thousands out of the 7,000 dead Canadians. We should know with precision, but I can’t sort it out. Maybe someday we will get the straight facts instead of word salads for once, if enough people sue Trudeau and his government for the information, because I have no doubt they will fail to be normal and transparent (like a stock-market-listed company most certainly has to be), and the information won’t be offered-up willingly, at all. It may take years and years and tons of money to get the information we own, and need. And God knows Trudeau’s adoring suck-up media won’t ask about it.

See, they’re the government. They don’t think they have to answer to you, you pipsqueak.

And yes, they are the government. They feebly allowed all this to happen — failed to adequately prepare, failed to read the impending coronavirus warning signs accurately, as, say, Australia did (they’ve lost “only” just barely north of 100 people with 2/3 of our population, but much greater proximity to China), failed to distance themselves from the garbage WHO recommendations, acted in dumb-ass muscle-reflex anti-Trump border shut-down mode, failed to close the borders in time fearing diverting from WHO recommendations and “racism” charges by them and their “woke” sheep, failed to mandate quarantine for travellers until late April, and now, as owners of one of the largest LTC and seniors’ care homes in all the land, they’re all the more culpable because some nursing homes have become something akin to centers of horror.

My recent articles, like “A Government Failure at Every Level,” ring ever more true, every day (even if I do say so myself). Government is at fault for most or all of this —including even their “private” care homes. More government is obviously NOT the answer.

Yet in a CBC story Monday, NDP leader Jagmeet Singh said, with no whiff of irony, “Profit should not be the motive when it comes to how we care for our seniors.” He’s talking about those “private” LTC homes, and wants the state to take them over, and assume state-control of all of them, such as in the Venezuelan or Chinese socialist/communist model. What if the “private” company is actually state-owned? Are the owners of those “private” homes the greedy a-holes he makes just about every good person in private, profit-seeking business out to be? Look in the mirror, Singh.

It appears Jagmeet Singh finally grasped some reality, and it’s just hilarious how it destroys his — and his party’s — entire narrative. So much so that I’m going to write-up a separate article just to emphasize this. The facts include (but are not limited to) the fact that many of the hated “private” “profit-making” LTC homes are actually owned by what he would normally consider to be the rightful owner: the state.

“The government owns Revera, the second-largest long-term care provider in Canada. It’s for profit and is facing a $50-million lawsuit for negligence. What is the government doing to protect seniors in the long-term care home that they own?” Mr. Singh asked.

Whooboy. He must be at least a little bit embarrassed that his arch villain — private citizens, who operate private businesses, in the free market economy he so loathes — are NOT the real villain, but rather it’s the state he loves, and their state-owned and controlled businesses, who are the actual villain! But he ignores that fact, and just blathers about with his usual disingenuous sloganeering (“It’s for profit”!!!), and about how evil it is to make profits in, well any area, but particularly in health care.

No word on whether unionized nurses and health care aides should continue to profit off their work at these homes, or just be ordered to volunteer their services from now on (because nobody should profit off the health care of Canadians [fist raise]!). But we did hear from their leftist public-sector union:

Chris Aylward, President of the Public Service Alliance of Canada, which is the largest union of federal public servants, wrote to PSP Investments CEO Neil Cunningham this month asking the Crown corporation to divest its stake in Rivera and have it transferred to provincial health authorities.

Hey folks, provincial socialism is better than federal socialism! Or something! Instead of acknowledging that government ownership was a total fail, and suggesting they try reverting it back to private ownership, he simply wants to switch which government owns it. It’s actually hideous. It’s all become a left-wing clown show.

Perhaps the funniest bit in the article was this one though, wherein the state-owned Revera claims that despite deaths and lawsuits and the horror show we’ve all witnessed, it is only following the state’s guidelines and doing what it is told:

So once again, it was the government — this time it was its hideous guidelines and obviously poor “directives” — that are largely to blame here. Also, state-owned Revera Inc has apparently been working in total partnership with their federal and provincial government overlords …and yet we have seen the horrific result of this all-government action.

I’m going to need to insist that the government answer for its culpability for the deaths of so many of our seniors. But between tween Singh and Trudeau, Singh is just a hypocritical doctrinaire silly-boy know-nothing who has lost the script. Justin Trudeau needs to be hauled on the carpet and made to answer for his government’s failure.