[dropcap]I’ve[/dropcap] said this roughly 8,000 times, but like liberals everywhere in Canada, the very liberal Liberal government in Victoria BC loves state-owned, state-run “businesses.” They won’t pay attention to this media poll or any poll that tells them the people think differently. 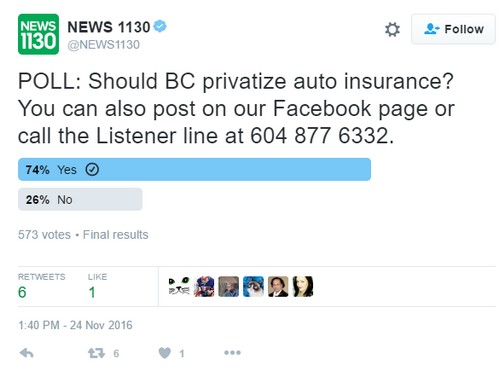 The news radio station is asking because there’s reports of the state-owned car insurer, ICBC, seemingly in a death spiral not unlike Obamacare, and of its need for huge rate increases (also not unlike Obamacare) — and even getting out of insuring ultra-expensive cars because they’re too expensive to fix (sort of a death panel for cars — honk honk!).

They post this poll, but the media — especially the state-owned CBC — certainly doesn’t dislike any state-owned “businesses.” They’d vote “no” in their poll. They do a poll like this as a newsy item, and then summarily drop the subject — especially if the results are like this one. For example, there’s no follow-up article about their poll results at the time of this writing.

Even if their audience does, as we can see here, the media virtually never question the validity of any of the growing list of the liberals’ beloved state-owned “businesses”: media (CBC), car insurance (ICBC — with its optional towing package!), a huge lottery and gambling racket (BC Lottery Corporation, and the website PlayNow.com, where you can literally bet against Donald Trump winning the election, for example), a nautical Ferry service (BC Ferries, which also operates vacation cruises for tourists), utility businesses (BC Hydro, etc), housing (yup), Soviet-style liquor stores with all the inventory decisions made at state level by government apparatchiks, state-owned and operated health care; and as you all know, much, much more — and all this in a supposedly free and democratic society.

The media refers to these state-owned businesses in exactly the same way they refer to, say, Walmart — like just another “corporation.” Except they love the state-owned ones and hate Walmart. (See my “Media join progressive gov in faking-out citizens; call state agencies “corporations”“).

So yeah, polling like this is clickbait. This is pablum. A sop. A joke on us, really.

How does this farce happen?

There isn’t one conservative or even a conservative-tolerant mainstream media outlet in BC, so 99% of the people have no idea what it is to be conservative, or what conservative ideology is. People in BC watch CNN and MSNBC in addition to the state-owned CBC news channels. They think the “corporate” media — as opposed to state-owned media — is right-wing. They think Fox News Channel is anchored by Nazis.

People in BC (as in much of Canada) think Liberals are right-wing, and the socialist NDP is merely “center, or maybe left of center” (or “centre” as they usually spell it — Euro-style). They automatically then refer to Conservatives as “extreme” right wing.

Academia is now totally ensconced by liberals and leftists from top to bottom, and the education system is virtually run by and for the extreme left-wing — possibly Marxist — BC teachers’ union. The taxpayers only fund it.

Show people in BC — especially the millennials — a photo of an Islamist terrorist and one of George Bush, and ask them who the terrorist is, and they’ll point to George Bush. They think Donald Trump is worse than Hitler (they also think that about George W. Bush, and Mitt Romney, and most every Republican). You’re ridiculed in BC if you vote conservative — or favor a Republican candidate.

The only reason people in BC (sometimes) vote for the Liberals instead of the even more socialist NDP is because there may be slightly less socialism under the Liberals (but not much less), and while the progressive sheeple of BC certainly don’t want freedom or free enterprise or capitalism, they do want just slightly less socialism than the NDP would foist on us. At least that’s how it is right now. There’s an election next year and the NDP is high in the polls. Progressive is what progressives are all about, so in a few years, it is possible for BC to be a full-on socialist enclave (or “democratic” as the progressives call it with a straight face.)

Given the circumstances for which they are partly to blame, it’s virtually impossible for the BC Conservative Party to get anything like a foothold in BC at this time.

So it’s easy to see why the sheeple of BC all vote left. Despite polls like this.