CBC News (@CBCNewsBC) tweeted this out, this morning:

How 'common sense' came to mean its opposite under Donald Trumphttps://t.co/Ehdu42T9Br pic.twitter.com/HwFX6pwOhP

Note that it was CBC News (@CBCnewsBC) that tweeted the link to their article. The article began like this:

Donald Trump’s victory was the most dramatic demonstration yet that liars can win elections. All he had to do was demonize reason and fact as the province of hated “elites.”

This is scary, for all countries and for reasons beyond the frightening contents of the Trump platform itself.

It’s an opinion piece. It’s not a news story. But I do understand your confusion given it’s from the CBC News. So do they. They know exactly what they’re doing. They were trying to confuse you. Have you heard the term “Rick-rolled?” It’s a lie, really, but in this case an especially egregious one because it’s the state-owned media who’s doing it to its citizens. It’s either that or they’re all utterly bereft of any understanding about what real fair and balanced and honest journalism is, which after all the money we’ve given up to them, they should better understand by now, don’t you think?

For all the writer’s haughty talk of Trump’s “lies,” it’s a tad ironic isn’t it?

Oh and why does state-owned media even have political opinion pieces — especially when they’re almost universally left-wing opinions? Who knows?! That’s the only thing I find “scary” and “frightening,” to use the writer’s own words about Trump.

Anyway, it’s written by someone (Kate Heartfield — “for CBC News,” mind you) who is apparently (to me, anyway) a Trump hater. Read on, and you’ll find she’s just as suspicious of Canadian Conservatives too, warning them and all of us, thusly:

Perhaps there’s a way for the Conservatives to honour both head and heart – to appeal to values without abandoning reason and embracing bigotry. The Conservatives can say “no” to a lazy dependence on slogans, on the nearest convenient enemy – a dependence they know full well encourages racism, sexism, anti-Semitism and homophobia. They can try to come up with a less destructive appeal to “common sense.”

But back to the bigger point, which is that the deplorable CBC and its left-wing opinion contributors might want to summon-up a modicum of honesty and at least take a cue from their bible, the New York Times, who, even though they likewise lie all day long in their reporting and columns and op-eds, do try to sometimes differentiate their opinion pieces from the news with a separate Twitter OPINION account.  Here’s an example wherein they smear Trump, as usual, because that’s all they do, but at least they’re not trying to fake you out like the CBC:

Mr. Trump had no problems with telling lies about what he could accomplish https://t.co/HrbTPE2IWF

With that, we have no trouble understanding it’s more anti-Trump whiney-crap bloviating — and go ahead and avoid it. Again I do understand your confusion when reading anything from the left-wing media today, inasmuch as it’s mostly lies and left-wing bias whether contained within their “news” stories or opinions.

State-owned media should be banned in this country, and that notion should be enshrined in our constitution. That’s truth. 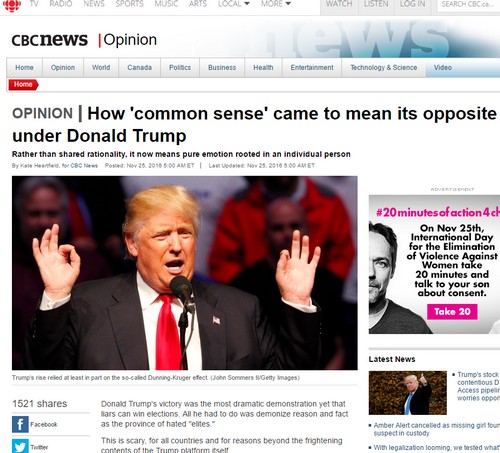