The State (not North Korea, but a Canadian province) issues wine to the plebs. From France.

Just a couple of weeks ago, I wrote, disdainfully of course, about how the benevolent bureaucrats at the huge British Columbia government’s huge liquor sales politburo called the “Liquor Distribution Branch” issued forth its official annual whiskey availability. The state allowed the masses to purchase these goods from the government-owned and government-run liquor stores, staffed by public-sector union employees, using scarce after-tax dollars, but only after first paying huge government markups, surcharges, and liquor taxes on the consumer goods. (See “Comrades! State-owned liquor politburo has chosen our official annual whiskey choices for us!“)

Today, with a similar government news release not unlike a Soviet-era farm report (only cheerier and more smug and glib), they have announced the government’s release of some wine that they have decided to allow the pretend-free people of BC to enjoy, now that the government has used the taxpayers’ dollars to arranged for the purchase (oops  — investment!), on their behalf. (See below)

On the upside, we learn to speak more socialist. For example, did you know that one of the core functions of today’s progressive government is “Liquor Distribution Branch portfolio manager for European wine”? I for one did not know that. But there it is in the news release. Also available for more information in case you need to deploy government services with regard to wine: “Senior Communications Program Officer, Liquor Distribution Branch,” and the separate “Communications Manager, Liquor

Distribution Branch.”  The government’s conveniently located BC Liquor Stores (closed on Sunday) are, naturally, a part of the larger Ministry of Energy, Mines and Natural Gas politburo. I see the relationship.

Last time, I joked that the even bigger federal government-owned and taxpayer-funded money-losing media behemoth, the dreadful CBC, hadn’t informed me about it, which would have seemed a natural. But perhaps they’re reading my articles now, because this time, not a moment after today’s BC Government tweet popped-up on my screen, the state-owned, CBC tweeted the news for the citizens via one of their own 800 Twitter accounts.

It’s beautiful. Your progressive governments in action, providing the people with what the government deems to be their much deserved and much needed core government services. In this case, Beaujolais Nouveau.

The 2012 Beaujolais Nouveau is being released at BC Liquor stores Thursday, Nov. 15. 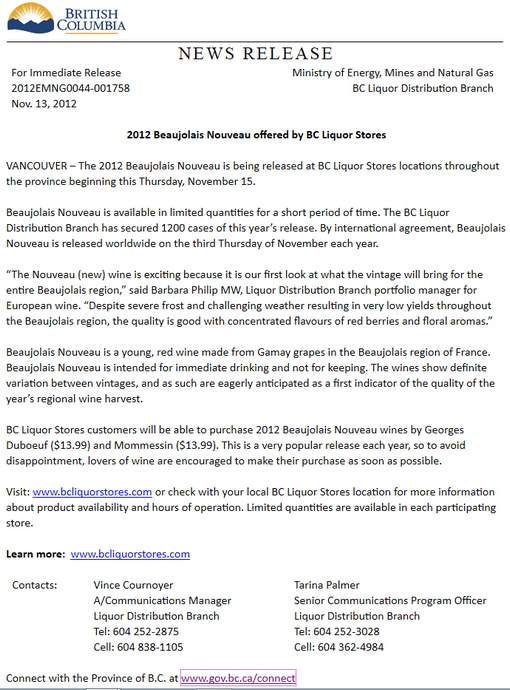