That terror bombing in Lyon, France? Arrests made of four, uh, “nondescript” persons from nowhere.. 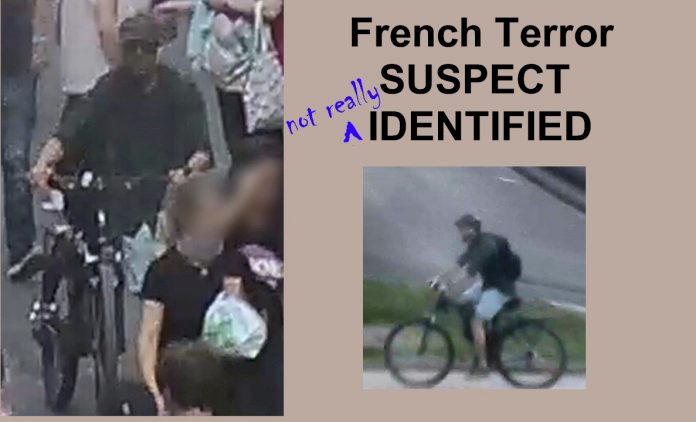 It’s barely even covered anymore. It’s such a regular occurance, that apparently it warrants pretty much no coverage. Maybe the story doesn’t advance a particular political or social agenda for some media.

It appears the people arrested yesterday for the latest terrorist incident in France, last week, are absolutely nondescript, at least to the Globe and Mail and New York Times. Their reports go on about the arrest of the four Algerian immigrants, without saying “Algerian” or telling us anything about their nationality or origin. In the case of New York Times, they manage to not even mention Islamists or jihadists. That’s some bad reporting. But good for their agenda perhaps.

For all we know, the suspects could be French cheese salesmen.

It’s weird because, for example, I read where those (libeled) Covington boys were wearing MAGA hats and were white and were Christians from Kentucky’s Covington Catholic High School and were at a pro-life rally and so much more detail of that particular type. And I know infinitesimal details of Jussie Smollett’s white MAGA hat-wearing racist attackers. Or, you know, “white” “MAGA hat-wearing” “racist” “attackers.”

Yesterday the G&M’s REUTERS report acknowledged some of what the French authorities said, “An investigation has been opened for attempted murder in relation with a terrorist undertaking.” But they left out — or deleted the words — “Algerian immigrants.”

That of course leaves the impression the culprits could just as well be double-cream brie cheese terrorists, or worse, MAGA hat-wearing white-privilegers who eat emmental.

Luckily we know more about them from other more transparent media, like al-Jazeera, who simply reported what they were told by police instead of choosing not to, for some reason.

My rule of thumb is that whenever the news media don’t describe, or don’t mention the names of those who have been arrested or whom authorities suspect, and provided they haven’t already smeared them with “white MAGA-hat-wearing male,” then the culprit or culprits are most often people with a variation of the name Mohammad, or they’re Democrats, or they are left-wing extremists. As in this case, I suspect.

In this case, virtually every other media I checked, including al-Jazeera, indicated what I also learned from a BBC report, which is that the chief suspects are Algerian immigrants. The BBC goes further in providing this useful background info, also missing from the Globe and Mail report:

Jihadist gun and bomb attacks have killed more than 250 people in France since 2015 and the country remains on high alert, with military patrols a regular feature of security in cities including Lyon.

In contrast to the BBC’s clear background information, the left-wing New York Times put up an even bigger smokescreen than the G&M, who at least stuck the word “Islamist” somewhere within their article. The NYT failed to identify the attackers’ nationality, failed to mention Islamists or jihadists, and then had this total nonsense as their last paragraph in an effort to utterly whitewash and obfuscate the ongoing story:

France has been hit by a spate of attacks in recent years, some of them deadly, carried out by people ranging from extremist attackers to mentally unstable individuals.

Oh thanks you guys.

It’d be almost funny if it weren’t a blatant attempt at gaslighting the population into thinking the “extremists” could be those dangerous “right-wingers” the liberal media constantly write about. (Actual recent Globe and Mail articles with great detail: “Canada’s new far right: A trove of private chat room messages reveals an extremist subculture,” and this one tied in many of their favorite smear words in one wonderful headline: “Far-right, neo-Nazi, white supremacist groups an increasing concern, threat to Canadians: Goodale.” Don’t even get me started on the New York Times’ repertoire.)

It’s one thing to tread carefully when reporting on current events, as in the Lyon, France case of last week. (Too bad the media doesn’t afford that same level of care in reporting on “white MAGA hat-wearing males” in “racist attacks.”) But it’s quite another to misreport history. The recent history of Islamist terrorism in France, with Algerian immigrants playing a key role, should not be described as “a spate” of attacks perpetrated by “a range” of random “mentally unstable” folks. (A good read here and here for you G&M and NYT reporters and editors, as if you don’t already know the actual facts).

ADDENDUM: The G&M’s original, bad REUTERS story, has now apparently been replaced with the worse AP story appearing in the NYT. So now they both have the same worse bad story in which the pertinent information referring to Algerian immigrants, Islamists, or jihadists, is all missing, for “some reason.”

Previous article
Left-wing author Naomi Wolf gets a correction of a lifetime, live on air
Next article
And the seas will rise FOUR FEET in 10 years