Newsquips daily news brief—    Newsquips are updated through the day, in an effort to keep up with the different ways in which the likes of the socialism-reliant CBC and other liberal media churn out the views and analyses of left-winger after left-winger, all of whom they pass-off as regular, non-political or non-aligned experts, for your “information” and “education”.

1. “In recent years, the ascendance of conservative ideology has obscured the value of progressive ideas and delayed a much needed correction to failed policies.” —  Sentence from a web site that stood out for me, when I looked into another one of the guest experts passed-off as just another expert on the far-left propaganda channel, the state-owned CBC Newsworld.  The Century Foundation is clearly another a left-wing or “progressive” group, but it was not even remotely referred to that way in the introduction of the CBC’s guest expert, for his analysis.  As usual.  And moreover, this serves as example number 8,953 of how the CBC defers to left-wing or far-left “experts” for “analysis” about every single issue they cover on their “news” channel, “Newsworld”.  They do this seemingly by some sort of now automatic editorial reflex, and it is unchallenged and utterly un-refuted by nearly anyone in Canada.  It reveals the CBC’s left-wing or far-left political world view for those of us who aren’t yet brainwashed.  They are so left-wing at the CBC they don’t even know how left-wing they are anymore—or worse:  they do know.

…And thus ensuring he passes the CBC sniff test… — Because this is the CBC, which as I’ve pointed out a hundred times, seems to cull all of their “experts” from either the left-wing Huffington Post blog in the U.S., or the even further far-left hate site the Daily Kos blog, here’s Daniel Levy’s Huffington Post page (at left), and an article about the Jewish Neocons. 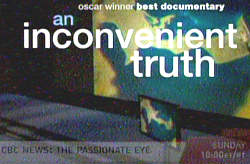 2.  Next up on the CBC:  An advertising break so they can advertise their big special on CBC TV:  It’s Al Gore’s hysterical “documentary” (and now largely discredited claptrap—to the point of laughter and the designation of it—by a consensus of sane people—as iconic junk science and pseudo-scientific idiocy), called “An Inconvenient Truth”, which the state-owned media felt Canadians needed to see because apparently they believe we haven’t yet been indoctrinated enough about the “man-made global warming” theories of the left and far left ideologues in North America.  I don’t doubt it will be shown over, and over, and over again, exactly as they have shown, over and over and over again, the brilliant “documentaries” of Michael Moore.

3.  Next up on CBC:  The socialism-reliant, state-owned CBC’s oxymoronic (with an emphasis on the moronic) “YOUR BUSINESS” segment, in which they pass off as totally neutral a report by what they refer to as a “research group” (their words).  Yes that’s what they called… wait for it…  the very far-left Canadian Center for Policy Alternatives advocacy group, which, as those of us who are not OK with being duped by the CBC and read this blog already know, is a far-left socialism-advocating group where the “alternative” they refer to is an alternative to capitalism—that being socialism—for Canada.  Nonetheless, the socialism-reliant CBC “YOUR BUSINESS” reporter doesn’t inform us of any of that, and instead simply refers to that “research group”, and some of their juicy class warfare info drummed-up in yet another of their yummy class warfare reports.  “That’s what happened in 2007 according to the latest full-year stats that are available and the Canadian Centre for Policy Alternatives says…”, is how the CBC’s business reporter set it up, without even remotely advising Canadians as to the far-left socialism-advocating principles of that “research group” from which she provided solid unbiased “news” and “information” to Canadians.
UPDATE Saturday Jan 3 2009:  Vancouver Sun reports today on same “report” by the far-left “research group”, but clarifies with its readers that the “research group” is a “left-of-centre research organization”.  They’re “left-of-centre” in much the same way that Nunavut is “north of the equator”.

4.   Say it with me:  State-owned and state-run media should be banned in this country, and that notion enshrined in our constitution.

5.  The Canadian and other liberal mainstream media routinely bury all the myriad stories about how Canada and the United States and other allies are bringing positive change to stone-age Hell-on-Earth Afghanistan.

Thousands of our national heroes have and continue to fight for our nation and their nation in Afghanistan, some dying (as we are extremely well informed with excruciating detail at every possible opportunity), doing what could be described as the near-impossible, in a place that comes closest to Hell on Earth, all on our behalf.

The heroes are bringing peace, human rights, order, civility, political stability, law and order, schools, national security, democracy, and more, to a stone-age country stifled by decades or war and stone-age Islamofascists terrorist goons and criminals and drug lords and jihadist warlords intent on training terrorists and launching terrorist plots to kill us—westerners in the U.S., Canada, and in other places;  and torturing and killing those within their country who don’t precisely comply with the goals of their clearly evil regime.  And in the process, our heroes are ultimately helping secure our own country and its national security from those goons and their ambitious plans to destroy us, after having attacked us on September 11 2001.

But they never talk about that in the media.  Rather, at the first opportunity, Canada’s media jumps all over the likes of the story today, about the one soldier who was arrested on charges of second degree murder for the killing of someone they in the media go ahead and call an “insurgent” or “Taliban militant”.  During a fierce battle during which our boys were being attacked by terrorist goons.  In a war.

Personally, I’m on our side.

6. Brilliant columnist Charles Krauthammer writes today’s MUST READ, which begins with a quote from an Associated Press story about the war in Israel:

A Real Cease-Fire Needed in Gaza

WASHINGTON—Some geopolitical conflicts are morally complicated. The Israel-Gaza war is not. It possesses a moral clarity not only rare but excruciating.

Israel is so scrupulous about civilian life that, risking the element of surprise, it contacts enemy noncombatants in advance to warn them of approaching danger. Hamas, which started this conflict with unrelenting rocket and mortar attacks on unarmed Israelis—6,464 launched from Gaza in the last three years—deliberately places its weapons in and near the homes of its own people.

This has two purposes. First, counting on the moral scrupulousness of Israel, Hamas figures civilian proximity might help protect at least part of its arsenal. Second, knowing that Israelis have new precision weapons that may allow them to attack nonetheless, Hamas hopes that inevitable collateral damage—or, if it is really fortunate, an errant Israeli bomb—will kill large numbers of its own people for which, of course, the world will blame Israel.

For Hamas the only thing more prized than dead Jews are dead Palestinians. The religion of Jew-murder and self-martyrdom is ubiquitous. And deeply perverse…

Previous articleLet There Be Dark?
Next articleNo Gay Mormon Left Behind