Taxpayer-Supported Rogers In Pro-Abortion Rally Mode Ahead of Election 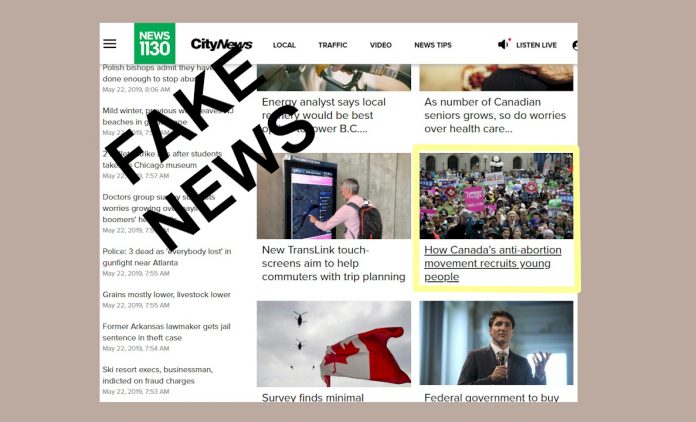 Their headline itself is meant to appear disdainful of what they obviously view as the scurrilous and threatening pro-life movement. “Insidious,” is a word they actually use within.

Filed under “TOP STORIES” (implying “news”), and featured near the top of the news page on the “local, national and international news” radio station website, the article is actually a podcast. Click PLAY and it’s clearly not merely a “conversation” about the news, much less a news item, but rather a full-on pro-abortion rallying cry. It actually denigrates pro-life folks. It’s like an in-house podcast by NARAL or Planned Parenthood or some other abortion mill or militant group.

This is how “news” is presented on “news” radio websites today, at this Rogers-owned station — one of about 52 radio stations Rogers owns.

Rogers receives some $9 MILLION cash per year directly from the taxpayers of Canada through part of the Canadian government’s mindless Reliance-On-Government Strategy, the “Canadian Periodical Fund.” And this taxpayer support is for utterly no reason that is apparent to me. Last year, Rogers had revenues of some $15 BILLION, and profits of about $1.8 BILLION. That’s just last year. They have billions in net assets.  They’re listed on the TSX. The Rogers family are billionaires.

Listen to the podcast, and you’ll think you were listening in on a conversation in the lunchroom at NARAL or Planned Parenthood — or Liberal Party or NDP HQ. You know, instead of at a newsroom of a “local, national and international news” radio station. One which is part of a conglomerate accepting federal taxpayer cash from pro-life Canadians.

“There are a lot of myths, lies, and assumptions out there regarding abortion. … Myths … especially in the United States, where things are not going great right now, for those who believe in a woman’s right to choose what she does with her own body.”

“With her own body” is a dead giveaway as to the bias in the podcast host’s preamble. And speaking of dead, the baby in question, a human being, didn’t get to choose what she or he does with his or her own body, see. But yeah, about those “myths and lies”…

The host, Jordan Heath-Rawlings, a self-described progressive, refers to abortion as a “medical procedure.” Like a healing thing, dontchaknow.

Then he refers to the people leading the pro-life movement.

Like the Alabama governor? Kay Ivey? A woman? But nevermind, he’s so woke! He seems to know all the cool stuff that appeals to the hip AOC-luvin gang these days, sneaking in the cool set’s latest trendy bromides such as, “Old White Men,” thus coming off as the true anti-white, anti-male woke feminist leftist herd member. Think he voted for Trudeau? They sound like bros. So yeah.

“…And it’s important for you to take a really hard look at who is pushing the anti-choice agenda!”

He has a guest! Maybe they’ll shed an honest light on the situation. Nope. She’s Sidney Loney, a woman who is an ardent pro-abortionist, and who, according to her website, does “in-depth reporting on health and social justice issues.” So at least we know it will be totes balanced, “myths and lies and assumptions” be damned!

Loney recently wrote an article at Rogers-owned Flare magazine, quoting one pro-choice militant as saying, “anti-choice rhetoric is not welcome in our city or in our country,” sounding very much like Justin Trudeau. The left loves them some diversity and freedom of speech and inclusion, huh? The unabashedly fascist statements went unchallenged by Loney. So I fail to understand journalism. Maybe I should just take a journalism class. Luckily, Loney teaches journalism at the publicly-funded Centennial College in Toronto.

Speaking of Rogers’ publicly-supported Flare magazine (about a half-MILLION taxpayer dollars per year), it also has another article at their site this week, written by a writer from Rogers-owned Chatelaine (which gets nearly $2.5 MILLION taxpayer cash per year), about the ever-so loathsome rising anti-abortion tide in America, with the bottom paragraph offering ways to “help the women of America,” by which they mean help only the pro-abortion women. They proceed to list all the abortion providers and lobbyists in America with links, so you, woke Canadian pro-abortion crusader, can directly support them. It’s a full-on pro-abortion article as written by NARAL.

And in Flare’s ubiquitous “Celebrity” section (because Hollywood weirdos and perverts know everything about the morals ‘n stuff), “Michael B. Jordan and Other Male Celebs Are Showing Their Support For Abortion Rights.” The sub-headline on that article is this (seriously): “#MenForChoice is a growing movement. And we are *here for it*.” So that’s objective fashion advice for women. Oh and whoops here’s another rabidly pro-abortion article: “Busy Philipps Got Emotional Over Abortion Rights—And Maybe We All Should.” I guess that last one was for fairness and balance, as the other articles weren’t rabidy pro-abortion enough, one has to think. They should call it A Flare For Abortion.

Loney says on the podcast that she was surprised that in fact, it isn’t, as her male host mansplained to us, “old white men” who are leading the, um, “anti-choice” movement, but articulate young, educated women. So, like, the total opposite of what the myth-busting host smugly proclaimed at the start of the podcast in which he warned of myths and lies.

“[They’re] young, articulate, university-educated … And they’re also pursuing careers in healthcare, and that also surprised me…”. The shock of it all. So surprised that these people are not dumb-ass old white male and (gasp!) Christian hicks from the hinterlands, but rather the total opposite. You might even think these two didn’t actually have a clue what they were talking about. And if you did think that, you’d be absolutely correct.

The host joined in the “surprise,” no surprise there, with “How did they come by these views?! Because that does seem really incongruous to me!” Well it would, yes. Perhaps “woke” actually means “ignorant.”

Loney admits the March For Life wasn’t even on her radar. It’s one of the biggest marches held annually in Ottawa, with 15,000 attending the last one, with additional marches the same day all across the country with participants numbering in the thousands. “Ignorance” doesn’t even begin to describe journalists who don’t even have the March For Life “on their radar.”

Notwithstanding her shocking enlightenment, she refers to the pro-life groups’ message as “insidious” at one point, and that the signs they carry are “false.”

This Rogers group appears to be a pro-abortion megaphone, where their pro-abortion advocacy is often disguised as a “TOP STORY” news item. And it’s taxpayer-supported.

Previous article
Big Lib-Left Gov Today: public schools hundreds of millions behind in basic maintenance
Next article
FACT CHECK: Another Liberal Lie. Middle Class Taxes Are UP, Not Down