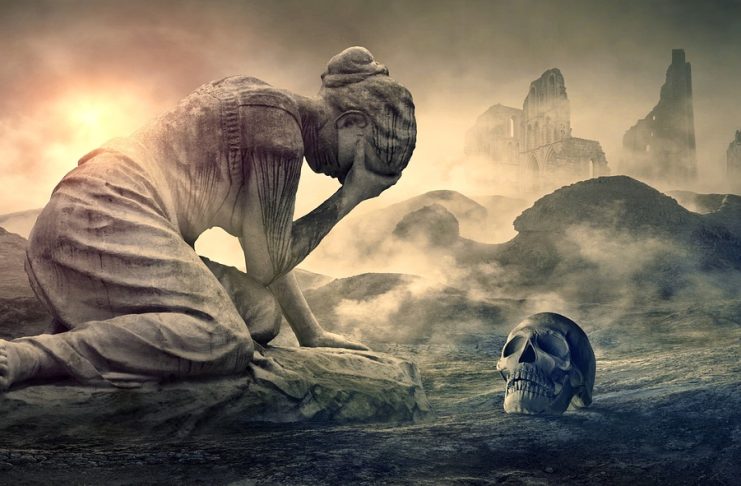 Yeah, it’s November 1. Just moments ago I was sunning myself in the front yard. A neighbor walked by and I explained that I wasn’t ready to let summer go yet. She replied in a “duh”-like way — “Of course not, who is?” Sure it’s only 50 degrees out there (that’s 10 Celcius for you Euro-lib hippies), but sun is sun and it feels nice on the old skin. Better than sitting here at the ‘puter and watching self-anointed “elite” Twitter blue-checks freak out like they’re being asked to voluntarily walk into the gas chamber as the very evil villain Elon Musk takes over the entire world including their tiny brains. Seriously. Here’s an example:

This is Chris Gailus (I know… WHO? Well, apparently, he’s an anchor on Global News. In Canada. Today. Not 1940. Not Belgium.). And as if you didn’t know, “this platform” he’s referring to isn’t Planet Earth, Belgium, or even Canada; it’s freaking Twitter. 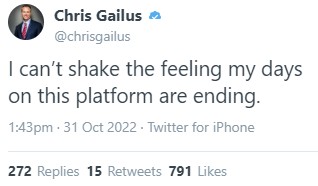 Quit Twitter and thus end it yourself, already. Shake “the feeling.” Sheesh. 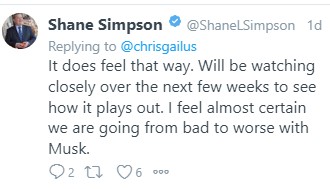 Here’s another politician replying to Gailus. Oops I mean another “news” media personality but you can understand my confusion. She apparently hosts what I guess is a women’s morning chat show(?) called Steel and Vance on CHEK TV, which nobody’s ever heard of either, and who herself was replied to by Ian Hanomansing, who I actually have heard of because he works for the state-owned CBC and apparently can’t stand privately-owned media (unless, perhaps, it is owned by, say, George Soros, in which case I gather he’d be totes cool with it):

“Ominous.” “How this will end.” “Days are ending.” And I could go on with numerous similar examples in other threads by panicky “journalists.” These people obviously have no idea what it’s like to be a conservative — or even an unorthodox thinker on Twitter. (Of course, many conservatives or heterodox or unconventional thinkers — or those who question authority or “the official government line” — like these politicians and journalists used to do as the very most basic part of their jobs — never got the choice to quit. They were summarily canceled by the genius and fair Twitter censor kids! For your protection!).

Seriously people. Get a large friggin’ grip — and not just on reality, but on your damned emotions. Especially you who count yourselves as journalists, and whose first professional responsibility is to separate your emotions and your politics from your job of objectively reporting.

In any case, here I am back at the computer instead of outside in the sunshine. And I gotta say, I’d way rather be out there than in here, although as far as things “ending,” I’m prepared to admit summer is. That is actually ominous.

FREE BONUS LINK (which will surely help to ominously end the planet as we know it inasmuch as we are currently living in the end of days): Blue Checkers Revolt Over Musk’s Threatened Monthly Charge: A Modest Proposal from the Unwashed and Unverified – JONATHAN TURLEY

Load more
Previous article
ArriveCan app needs to DEPARTcan (catch the same flight as the state-owned CBCan!)
Next article
Gone to the Bathroom