Gone to the Bathroom 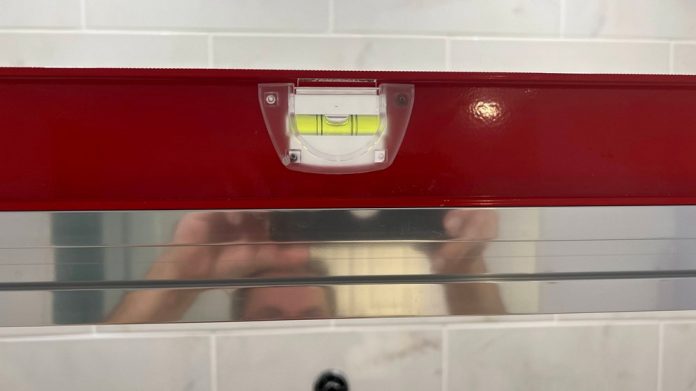 Thousands and thousands of people have written and called in …. no that’s a lie (or a wish or a dream…). Let me start again. A guy emailed asking where I’d been for the past, like, two months, and why I hadn’t been posting brilliant new articles here like I usually do and as I’ve been doing for most of the past, like, twenty years.

Truth is, those twenty years of harping on liberals and socialists and the media (but I repeat myself, yadda) are wearing on me a tad, so I wasn’t too upset that I had this home reno job planned anyway, which could serve to help legitimize my brief but necessary PTBC absence. I spent about the last six weeks renovating our main bathroom rather than watching the state-owned CBC and learning yet more about how smart Justin Trudeau and Chrystia Freeland are. I don’t think Justin Trudeau or Chrystia Freeland could do this work. They just wouldn’t know where to start. And it would end up costing 58 million dollars. They’d create a whole ministry, and wouldn’t answer any questions about it (save for their usual word-salad garbage answers). Well I intend to be transparent about it!

So here are a few photos.

First, here’s me just finishing up the wall-tiling. Those yellow things are levelers which help ensure the tiles are evenly spaced, and even in terms of their relief from the wall. Smooth-like. I’m shown here clamping one of the last yellow wedges to even out the last tile. (That pointy stomach thing on me is some weird clothing malfunction or digital photo illusion. I don’t have a pointy stomach. Except after I eat triangles.) 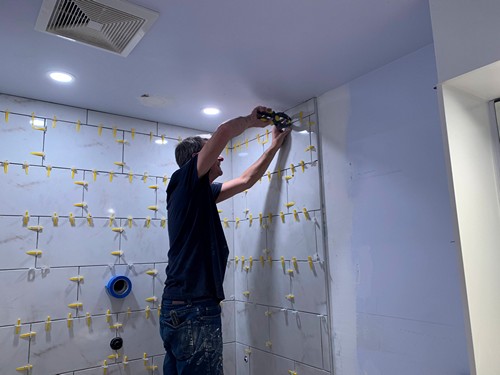 This next shot is way before those tiles when on, though, which is when most of the work took place. This photo is of my fancy new PEX pipe valve work (I used copper pipes on the last reno, but PEX and clamps are what the cool kids use today). The original house-builders put the supply pipes on the other side of the shower, which is dumb because you had to reach across the shower to turn the shower on. So I installed the new valves on the correct wall. A new Delta valve with a separate Delta six-way diverter valve, so we could select which of the five (count ’em, five) new shower heads or combinations thereof we wanted to use at any given time. I had to label stuff so I could remember what the heck I was doing. Red is hot, blue is cold, and white is mixed. This goes to this head, this to this, and who knows what will happen in the end. Generally, that’s how it went. Also, White pipes matter. 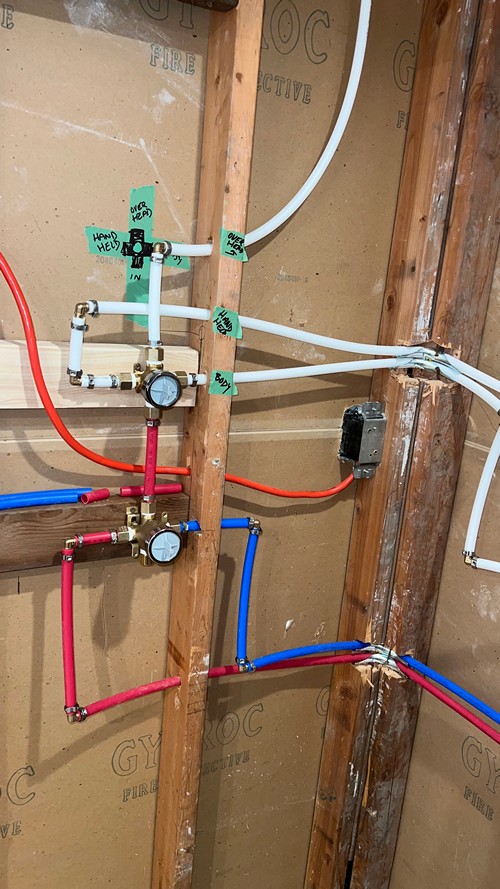 Next shot below, you can see more of the plumbing. The complicated (and slightly off-kilter) white piping in the middle is the configuration for the three body sprays. I did it like that so the water pressure would be balanced between all those sprays when they’re on (valve justice, you might say, if you were a freakin’ lefty woke idjut plumber). I can confirm that madness worked! I now believe in valve justice. The pipe leading upward on the left wall goes to a new pipe inside the ceiling for the overhead “rain shower,” and the white pipe going rightward leads to a handheld shower bar thingy on the right side wall. 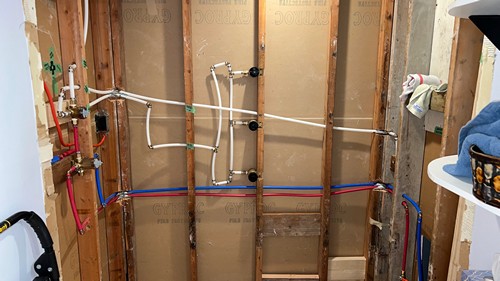 The old bathtub drain didn’t line up with the new shower base drain, so I had to do concrete work (we have concrete floors) and dig deep to do the new drainpipe work as well. This was brutal work. Justin would get a lackey to do this for sure. Freeland would have to consult the UN. I just hacked away at it until it was done, without tweeting about — or having Gerry Butts or the state-owned CBC department braggadociously tweet about it — even once. Until now, now that it is successfully done on time and under budget and with nary a scandal except for my copious swearing. Swearing, of course, at concrete. 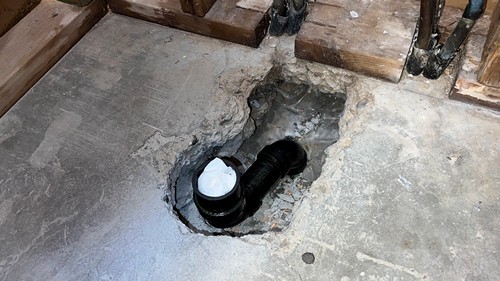 Installing the cement backer board for the wall tiles was hard work. Hiding all that plumbing on such a permanent basis is a little scary, too, for sure. And I wanted people to see my fine work forever, so why did I have to cover it up?! Yes, I checked the plumbing a thousand times before putting up the cement boards. 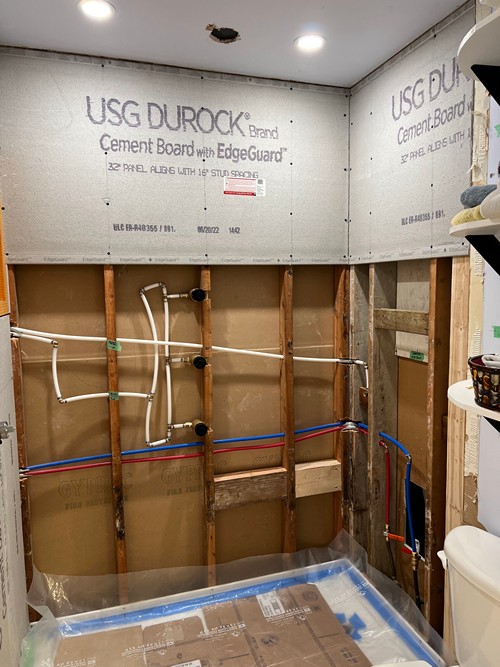 Cement board work is hard because you have to make cuts — using expensive tools with expensive diamond and carbide-tipped blades — for all the plumbing valves and whatnots, which, when you have five heads and two valves, and you built an in-wall niche, it is tedious and time-consuming. Worse than doing your taxes. So you can imagine. 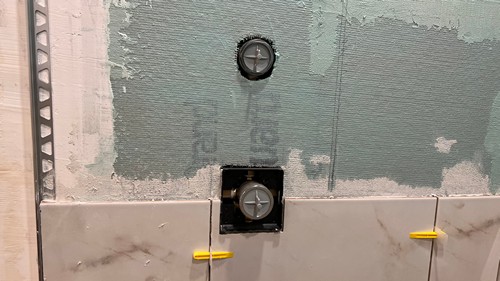 Here’s that in-wall niche. Took many hours extra to build this in. And for what? Shampoo bottles and a razor. Sheesh. 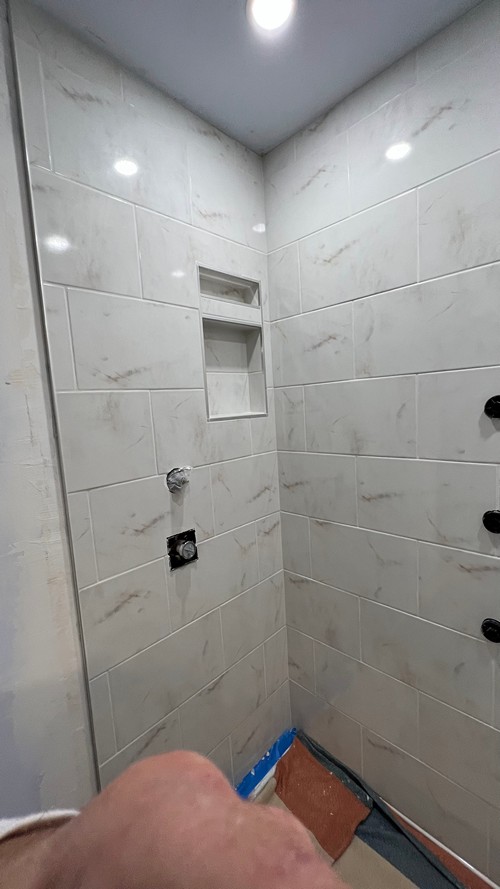 Here’s a shot of the opposite wall, showing that shower bar thingy as well as the body sprays on the big wall, and the ceiling rain head. Doors are also now installed. These doors are apparently more effective than our country’s borders, which is a bonus. Nobody sneaks into my shower. 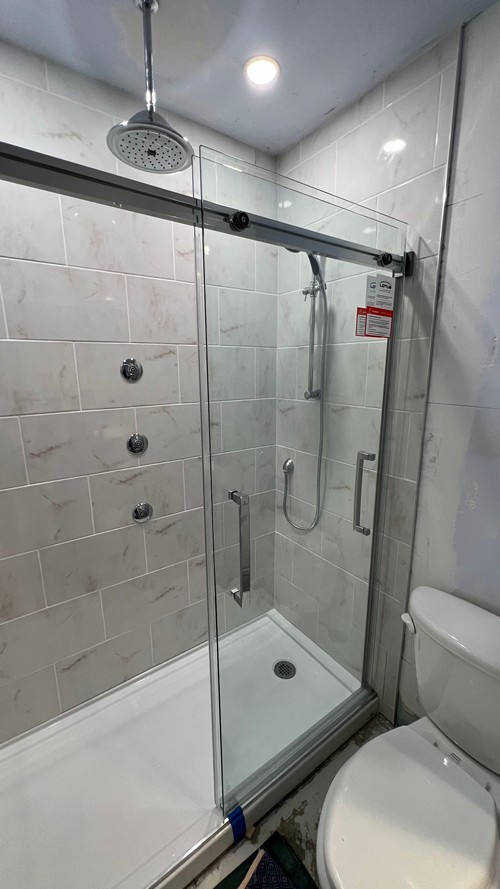 I had to lay the new shower base in a bed of concrete and had to level the rest of the floor with self-leveling concrete too, in preparation for the floor tiles. This is just after I poured the concrete. Had to do it twice! 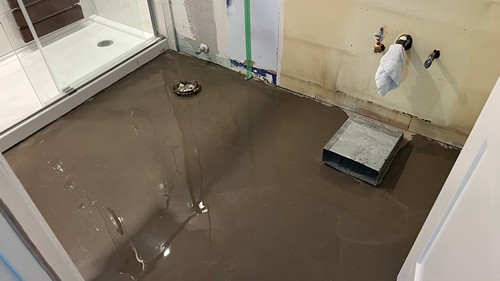 And this last shot shows those floor tiles along with the suspended cabinetry I installed just last week, complete with in-drawer lighting and under-cabinet and under-under-cabinet lighting (so lots of electrical work too). New toilet with dual flush to please the greenie enviro nuts. Steven Guilbeault would love to use this crapper, but I doubt he ever will because it has a built-in bidet, rendering it less environmentally “sustainable,” and the shower itself has (have I told you?) FIVE SHOWER HEADS. Five. Steven. 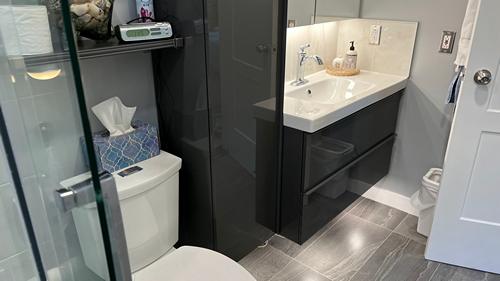 Cost plenty ‘o after-tax dollars, tons of time and effort, quite a shocking amount of blood spilled, a fair bit of yelling, lots of various kinds of wet saw, regular saw, grinders, and reciprocating and oscillating saw noises, but in the end, it was and will continue to be a cleansing experience.

Previous article
Summer is over?
Next article
“Made in China” Canadian flag pins bought by Trudeau Liberals