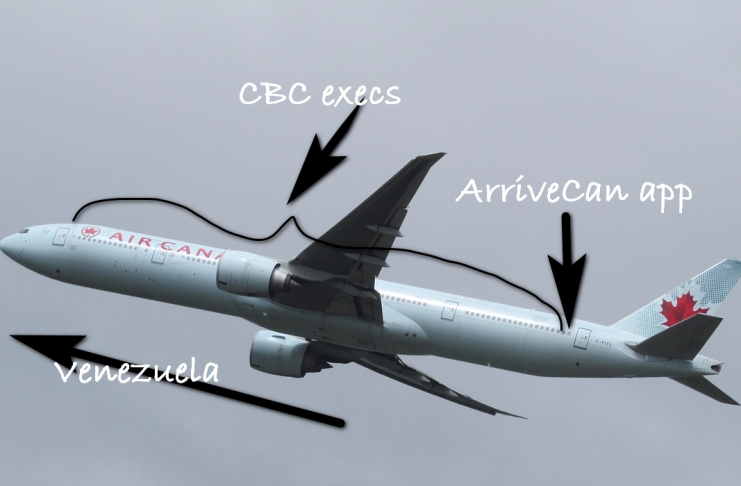 This story had the unfortunate effect of having made me say, Uh oh, a Republican urges this? oh boy, now we’re stuck with it forever! And we’ll have to start using it at every store and restaurant and gas station too! 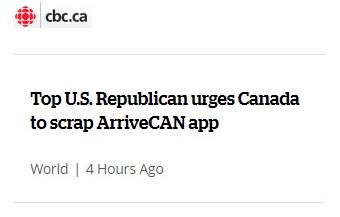 The Big Government progressive Liberal politicians like Justin Trudeau and his Transport Minister Omar Alghabra love their yummy Big Government citizen control app. Love it. Despite all the obvious public hate for it, they just constantly double-down and love it even harder.

They started it supposedly because of the so-called “Covid” (which their BFFs in Communist China insisted we call it, and we complied like idiot lemmings), but they have already threatened to expand its use and, as if I had to tell you, to make it permanent. Why? Show us their benevolent love. It’s what they do in China and North Korea, so it has been tested —and it works!

The left-wing media is in complete Progressive Town lock-step, of course, as if I had to tell you that. The reason state-owned CBC wrote this story about the dastardly freedom-loving “Republican” was so they could lead you to think it’s only those fascists on the right who hate this stupid app. They included this sentence in their story — one which was apparently proof-read and signed-off by a state-employed CBC editor — despite it having utterly nothing to do with the story, except perhaps a tidbit of the juicy gossipy politics BEHIND the story (very, very, very far behind, to the extent that it is excruciatingly irrelevant to the story at all, whatsoever):

…The debate over ArriveCAN has been happening in Canada for a while. It so happens that in this case the No. 3 Republican in the U.S. House of Representatives, best known for her staunch defence of Trump during his impeachment trial and in his attempt to overturn the last U.S. election, has waded in…

Haven’t any Dems or better yet, the AOC idiot girl-gang endorsed Canada ditching this horrid big brother app yet? Why yes, I think that is exactly the case. But the “news” is that a Republican hates it. Therefore that app’s good, IIUC.

I think I’ve heard about a dozen Canadian mayors (no doubt they are mostly progressives, or worse) chime in repeatedly over the past few months to say the exact same thing as that evil-head Republican, and I bet many of them could be said to be “best known for” their, um, what was it… “staunch defense” (that’s “defence” spelled correctly) of Justin Trudeau even though he’s been found guilty of ethics violations multiple times, and his government is objectively hideous and embarrassing the world over. And maybe they even defend other things I detest politically! And yet I agree with them. And hey whaddya know, Democrat mayors and governors and senators and congressmen have hated on the app too! Perhaps that’s why the CBC had to add this tidbit (after their greivous headline warning that this cry was coming exclusively from a Republican (!!!!) —and one who also defended Trump([email protected]!!Q!!!):

…Mayors of Canadian border towns are pleading with Ottawa to scrap the app, as have businesses and a border-district U.S. Democrat, Brian Higgins.

The Buffalo News newspaper also urged Canada to reconsider. “It’s not working,” the newspaper said in an editorial this week. “And it’s hurting both economies.”

The newspaper from upstate New York called ArriveCAN a nice idea and relatively simple to use, but said it has outlived its utility, especially as tourism-dependent businesses around Niagara Falls are still hurting from the decline in overseas travel and are desperate for cross-border visitors…

That’s not what the headline promised!

They’d run out of internet space before they could list all the people and organizations and city/town and state governments and newspapers — and even their cherished “experts!” — who have berated this idiot Big Bro app. And, if you include lowly citizens, who have in scores raged about this stupid app in editorials and on social media and even in person (but who cares about citizens —am I right, CBC?) basically everybody (except progressives who yearn for complete government control of all The Stupid People) hates this damned stupid thing, even including people who defended Trudeau! —if you can even imagine that!

I suggest a flight to Venezuela for this idiot app, with the 396 overpaid execs from state-owned CBC riding along. If Air Canada isn’t too jammed-up at Pearson you’ll all get there this year.

Also see: How Canada stupidly bet its border economy on $25M ArriveCAN app | National Post (among about 80 other such articles).

Load more
Previous article
Liberals’ “Canada Child Benefit” program shown to be another govt fail: favors rich rather than poor (!)
Next article
Summer is over?