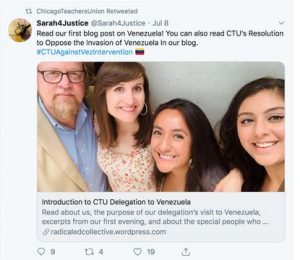 I’m taking another few days off this week of August 19-25, thus the lack of new posts. Unlike some school teachers and teachers’ union officials in Chicago, I will not — not — be visiting Venezuela while I’m off, and using capitalist tools like Twitter and Facebook to plug that country’s despotic socialist dictatorship and overlook the horrible poverty-ridden and toilet paper bereft hole it has become while tweeting stories about how “there are no homeless people there,” after millions have fled that country in recent years for no reason that is apparent to those union bosses or the ever-so woke teachers (teachers, I might remind you, who will actually be teaching children, starting in a couple weeks). But it sounds about right, doesn’t it?  I’ll bet teachers and union bosses from other cities in the U.S. and Canada have done the same.

No, rather than progressive Venezuela, I’ll be in Washington state, helping my sister and brother-in-law move into their new house, along with my nieces and nephew who live nearby them. Like Venezuelans, they are also not homeless. The difference is that we’ll have access to toilet paper and food, and beer, and, well, any damn thing we want.